How Conservatives Lead America into Socialism

Here is a video version of this blog:

Yes, it's true, and it is happening as we speak. Led by conservatives and libertarians on the Tenderfoot Coast between Times Square and Tyson's Corner, the Republican party and its affiliate think tanks and other campaign groups, are leading America into democratic socialism.

Evidence is aplenty. Pundits on the right, from Senator Rand Paul to the Heritage Foundation, the Cato Institute and the Fund for American Studies to Dinesh D'Souza, all raise Sweden to the skies as a robust bastion of free-market capitalism.

Why are they doing this? Is there not a single man or woman left in the conservative movement who can actually read?

Why are Republicans, libertarians and conservatives all of a sudden so desperate in trying to tell us all how wonderful Sweden is?

Sometimes you can hear a reason for it, somewhere in the background. It sounds something like this: Bernie Sanders likes Sweden, so we are going to like Sweden more so Bernie Sanders stops liking Sweden.

It really does not seem to be more complicated than that. It boils down to a pissing contest about what label to put on Sweden. Is it a socialist country, or is it something else?

This contest could end very quickly. All the Tenderfoot conservatives and libertarians need to do is to join Bernie Sanders and AOC and demand that America become Sweden right now. All they need to do is line up with the left and propagate for socialized health care, socialized child care, socialized universities. Yes, Sweden does not have a single privately owned, run or funded university. They could stand there, next to their Swedophile peers on the left, and demand that home schooling be made illegal, as it is in Sweden.

They should request that Congress double income taxes for lower-income earners. They should campaign for a 60-percent top income tax on annual incomes of about $75,000 and up. They should immediately lobby for a value added tax up to 25 percent on everything we buy, including tap water.

That's right. If you want to go all-out Sweden, you need to go all-out in terms of taxes, too. In non-socialist Sweden you pay a 25-percent tax on the water you get from the tap in your kitchen.

Why don't the Swedophile libertarians and conservatives out there demand higher taxes on gasoline until the price is north of $6 per gallon?

Why don't they demand cuts to our police budgets by half and steer the rest of the money into "social programs"? After all, that's what they did in Sweden, and that's why they now have out-of-control gang wars with AK47s, hand grenades, rampant arson attacks, IED bombs going off everywhere...

If Sweden is really what America's conservatives and libertarians want, then why don't they come out of the shadows and actually demand all these things? Come out and join Bernie Sanders in demanding universal, mandatory, government-run preschool for all kids in America, where government gets to decide the curriculum.

Come out in the open and demand that Congress pass a non-socialist, entirely totalitarian single-payer health care system. Yes, that's an oxymoron, but so is calling Sweden a non-socialist country. And while you are out there propagating for the Swedish "solution" to health care, please disregard the catastrophic Swedish response to the covid-19 epidemic. If you are a neoconservative Swedophile, I suggest you stick to the Heritage Foundation talking points that Sweden got it right, despite their highest-in-Europe death rates.

Speaking of the Heritage Foundation: they have now joined the Swedophile chorus full force, praising Sweden and Denmark as bastions of capitalism and free enterprise. These two countries compete for the two top spots in terms of the world's highest taxes. The Heritage Foundation consistently rank them as among the freest in the world, but that is only because they don't include socialist economic redistribution in their freedom index. If you look at how deeply the welfare state intrudes on private economic activity, namely by measuring the Gini coefficient before and after the welfare state has done its deeds, you will find that Sweden and Denmark actually have the most socialist welfare states in Europe, and therefore in the free world: 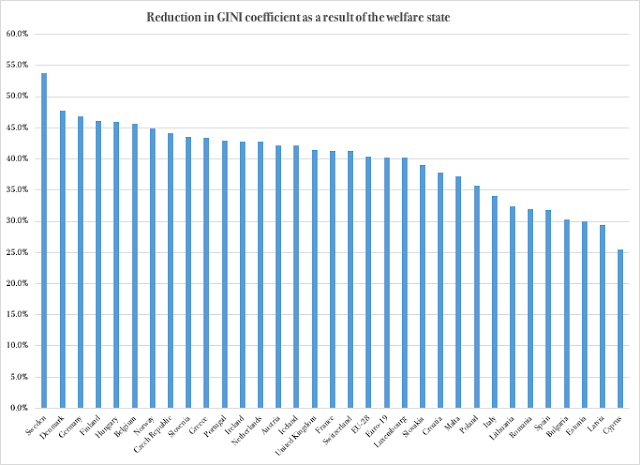 Bernie Sanders is right. Sweden is a dyed-in-the-wool socialist country. The reason why is he right is that he understands his own ideology. The libertarians on the Tenderfoot Coast, from Times Square to Tyson's Corner, do not understand socialism. They haven't bothered to actually study it - they pundit about it, but they haven't studied socialism.

The fact of the matter, which again Bernie Sanders gets, is that socialism is not about government owning things. In countries where government owns things it does so to achieve an ideological goal. that goal can be achieved even if government does not formally seize private property.

That goal is to eliminate economic differences between private citizens.

Yes, it's that simple. If you don't understand why this is the real purpose with socialism, then go back and read Karl Marx. Then read the democratic-socialist theorists from the first half of the 20th century.

Since Sweden has the biggest democratic-socialist welfare state in the world, they are socialist to the core.

But let's disregard that for a moment. For the sake of argument, let's go with the program that Sweden actually isn't socialist. Let's call it neoconservative. After all, neoconservatives love the big, redistributive welfare state; the founder of that ideology, Irving Kristol, was de facto a socialist - he even criticized Lyndon Johnson's Great Society and War on Poverty as an inadequate expansion of government.

Kristol also wrote an essay called Capitalism, Socialism and Nihilism where he demands that America be reconfigured in the image of distributive justice.

Distributive justice, folks, is precisely what the left calls it when they want to take money from Pete and give to Paul.

So let's call Sweden a neoconservative country. Does that make our conservative, tenderfoot-coast dwelling friends feel better? Sweden still has all the things I just mentioned. Do those things sound more palatable now that they are neoconservative, not socialist?

I have written a three-part series about Sweden that explains exactly what that country looks like. I go through it all, from their "business friendly" taxes to their labor-union tyranny to their fake school-choice system. It was featured on the Tom Woods show a year ago and has had quite a few readers. If you haven't read it, do it now before the neoconservatives sell you a bridge in Sweden.

Another Swedophile, Dinesh D'Souza, echoes the false notion that Sweden doesn't kill the goose that lays the golden eggs. In other words, Sweden does not tax its businesses to death, D'Souza claims. The only problem for D'Souza is that he is wrong, dead wrong and very dead wrong. The golden eggs are getting smaller and smaller. D'Souza and his friends may not want to study up on this, but you can. Six years ago I wrote a book about the decline of the Swedish economy, courtesy of the welfare state. Why did I do that? It's my job as a PhD political economist, and it is my moral duty. I have bad memories from growing up in Sweden.

I know where D'Souza gets his propagandistic talking points. His source is Johan Norberg, a guy who walks around with yoghurt in his shirt pocket. Norberg dispenses nonsense and outright lies about Sweden with such profligacy that I can hardly keep up. He obviously did not ghost-write Rand Paul's book The Case Against Socialism, a book that closely mimic's Norberg's talking points with a plethora of Swedish half truths, distortions and inaccuracies.

The ironic thing about Rand Paul being a Swedophile is that he never misses an opportunity to yell "you're a neocon!" to Liz Cheney and other prominent conservatives. Yet in his book, the good Senator from Kentucky launches into a tirade of adoration for the most expansive, most redistributive, most punitively taxing welfare state outside of North Korea. (Not even China has a welfare state as expansive as Sweden does.)

America's libertarians have rolled over and are playing dead. They have surrendered in the fight to stop the growth of government. They have dispersed into the woods on a campaign of eclectic flea killing. Back at the frontline of the battle for America's future, the neocons are walking arm in arm with the Sanderistas and AOC cohorts, leading America into the shadow realm of economic stagnation, industrial poverty and unlimited government.
at July 02, 2020