MMT and the Ketchup Inflation Effect

The stimulus spending in response to the coronavirus epidemic is motivated by an economic "theory" that endangers the very future of the American economy. And our entire social, economic and political stability. In one word: hyperinflation.


In a policy memo on April 30, Romina Boccia and Adam Michel of the Heritage Foundation explained:

Congress must ensure that taxes stay low for all Americans by making the 2017 tax cuts permanent before they expire at the end of 2025. Essential rules for business expensing also begin to phase out at the end of 2022. If not made permanent, these coming tax increases will depress new business investment and slow down the recovery.

This is a great summary of what is coming down the pike, now that Congress has seen fit to basically blow up the deficit to 100 percent of tax revenue. For every dollar we pay, Congress needs to borrow another dollar.

Part of the coronavirus "stimulus" spending is temporary, thus making the deficit temporary to the same extent. That said, there are more permanent elements in their package than, frankly, even most public policy wonks seem to realize. A federal, tax-paid family leave program is just one example, but that one alone is capable of adding $400-600 billion per year to the federal budget. The $600-weekly bonus for the unemployed is going to morph into a universal basic-income program - with a price tag that could easily rival Social Security.

Just the CARES Act alone contains $988 billion in increased, permanent federal spending. That is a staggering amount of money, given that the federal government spent $4.4 trillion in 2019.

All of this new spending will be paid for with printed money. Normally, one would expect people on Capitol Hill, and perhaps also in the White House, to raise some concerns that all this new money printing at some point may trigger an inflation storm through the American economy. That insight, however, is nowhere to be found, and there is a reason for it.

Over the past couple of years a group of very radical economists have been pushing a macroeconomic mythology known as MMT. The abbreviation is supposed to stand for "Modern Monetary Theory", but the acronym is more appropriately spelled out as Mad Monetary Theory. Its meaning is as crude as it is simple: you can print as much money as you want, and if that should cause inflation, you just raise taxes and everything will be hunky dory again.

Proponents of MMT, including Stony Brook economics professor, Bernie Sanders supporter and economic advisor Stephanie Kelton, often dismiss the risk for inflation from mad monetary printing. They are of the ill-informed belief that there is no relationship between money supply and inflation.

At no point have MMT economists presented any kind of evidence to back up their claims. On the contrary, they carefully dodge any suggestion that the practice of Mad Monetary Theory could trigger anything that even remotely resembles what happened in Venezuela.

Sadly, monetarists who criticize MMT also fail to look at the data. Most of them seem to be baffled at the very idea that anyone would want to print obscene amounts of money in America, so therefore there is no reason for us to worry that it is really going to happen.

Well, it is going to happen. In fact, it is happening as we speak. The increase in M2 money supply in March was one of the highest on record - the last time we saw a sustained period of M2 annual increase in excess of ten percent was during the high-inflation years when Jimmy Carter was president.

We are back at those levels again, but this time without high inflation. What we saw in March was just the beginning of the Fed's effort to bankroll all the new spending that Congress has decided on. There is a lot more to come.

While proselytizers of Mad Monetary Theory are running around with their arms up in the air, praising the money printers for working overtime, those of us who think with a clear mind have all the reasons in the world to worry. Or in Venezuela, which is where we can find a pristine example of MMT in practice.

Venezuela had a problem with inflation long before they elected a socialist for president and embarked on an unhinged crusade to build the world's most perfect welfare state. However, their experience with inflation was, in a manner of speaking, controlled and largely predictable. Their real problems began when now-defunct president Hugo Chavez decided that government could solve all people's problems in every corner of their lives.

To bankroll all his new spending, he ordered the printing presses at the central bank to work overtime. As Figure 1 explains, the money printing went into high gear relatively soon after Chavez took office in 1999. He started accelerating money printing in 2002 and spent the years through 2007 expanding money supply at rates of 50-100 percent per year.

The lack of an immediate response in inflation from the first Chavez money-printing frenzy emboldened believers in MMT. Their theory was in its academic infancy at that time (a stage it has never left) but the fact that inflation even seemed to slow down in Venezuela during the first bolivarian monetary fest, was taken as a reason to double down on the theory: 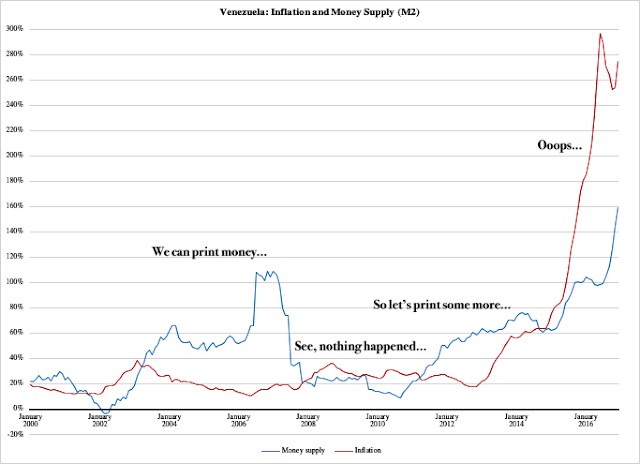 A supporter of Mad Monetary Theory at the time of the first Venezuelan foray into money madness would point to the decline in inflation during that time as face evidence that there is no such thing as monetary inflation.

What he or she does not understand is that the decline in inflation is actually related to the crazy expansion of government. More spending, more entitlement programs and other incursions into business and household economic activity actually brought about a slowdown in economic activity. The pressure on prices that we normally see from regular economic activity (even at the high levels the Venezuelans had gotten used to) weakened as GDP growth was depressed under the increasingly heavy hand of government.

The fact that Mad Monetary Theorists failed to see the inflation coming is one thing; unfortunately, there was no effective counter analysis from monetarists to the Chavista central-bank party. On the contrary, it was as though monetarists in general lost confidence in their own theory when hyper-inflation failed to erupt in the 2003-2008 period. They didn't bother to study price theory to a proper degree to grasp the ketchup bottle effect.

But fear not. Time would give the monetarists right. In spades. The inflation that emerged during the second money-printing episode, from 2010 and on, actually did trigger hyper-inflation. And not just that: strato-inflation, super-inflation... whatever you want to call it. The inflation levels in Figure 1 were only the beginning:

Figure 2 (inflation on the left axis, money supply growth on the right) 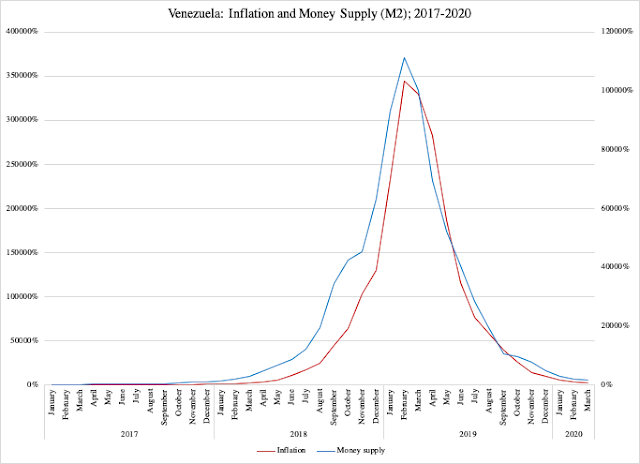 Once hyper-inflation was a fact, the central bank simply had to print money just to keep up with prices. The situation spun out of control and prices increased at 350,000 percent - per month.