Trump's Next Challenge: A Fiscal Crisis

What would you do if government raised your taxes by 11 cents per dollar you pay now?


When I compare America's fiscal situation today to where Greece was a decade ago, people shake their heads and tell me that "it can never happen here". When I ask why, I get three different answers:

1. We are the world's largest economy, while Greece has a population the size of Michigan.
2. We have the world's strongest currency, therefore we have an infinite line of credit.
3. We have been running deficits for half a century, why can't we just continue to do so?

I hear these arguments from people inside circles of power. There are exceptions, but far too many of those who have access to - or hold their hands on - the levers of our government machinery, will tell you various iterations of these three points.

One reason why they do this is what a German philosopher once called Gleichdenkenkreis: a circle of thinking alike. When people in power - be it a university or a country - share the same views to a large enough extent, and when sharing those views becomes a ticket into the circle, the productive intellectual process is replaced by stagnant regurgitation of conventional wisdom.

The consequences range from bad (university) to catastrophic (country). Where America is today, the catastrophe is closer than a lot of people would want to recognize. But it is not just the looming fiscal crisis that litters the economy with red flags; it is also the mindset that will bring our government to implement a disastrous response once the crisis unfolds.

Before we get to how you respond to a fiscal crisis, let us refute the three points above, starting from the bottom.

The third point, "nothing's ever happened in the past, why would it happen now?", reminds me of when I was a kid and rode with my grandfather into town. We were coming down a hill and over a bridge crossing the railroad track. On the far side of the bridge was a three-way intersection. We were going left. Without stopping or glancing to the right, my grandpa hurled his old Opel Kadett through the intersection, and on our way we went. I asked why he didn't stop to check for traffic.

"No one has ever come that way before" he replied plainly.

My grandfather, who was born in 1907 to a single mom, grew up in formidable poverty and barely got six years of education. He might be excused for his particular brand of analytical astuteness (God bless his soul...). I think, however, that we should expect a bit more of people whose daily deeds shape the very future of our country.

As a statement of political confidence, the point about the size of our economy is only marginally more respectable. Size matters only when it comes to industrial diversity and the role of foreign trade: a small economy more easily becomes dependent on on one or two industries, thereby also becoming dependent on their jobs and their business as a tax base. Iceland is a prime example.

However, it does not take much upsizing before an economy becomes diverse enough to rise above the mono-industrial state. Greece certainly is not a mono-industrial economy. Its exports is relatively lopsided, but that has no bearing on the economy itself. In the years before the austerity crisis, the Greek economy was about as diverse as any other European economy. While the Europeans use a bizarre industrial-classification system, making it hard to use in international comparison, according to Eurostat:

In other words, the Greek economy was big enough to be normally structured. Its crisis is still relevant to us.

But what about the currency? Surely the U.S. dollar will always protect us, right? The world will always buy our Treasuries, right?

In 2009, when Greece entered the Great Recession in full force and its budget deficit exploded, the country had been using the euro for eight years. Back then, the common European currency was considered the pinnacle of reliability: its constitution banned Quantitative Easing, was written to keep inflation at a bare minimum and forced member states into deficit and debt restrictions. People joked about the dollar in comparison.

That did not help Greece. Once the Great Recession hit, their debt crisis spun out of control.

Reason? Not what people think. It was not the case that the deficit just emerged from nowhere thanks to the recession. No, the Greeks - like us - had been borrowing profusely for a long time. Figure 1a reports actual numbers for government spending and revenue from 1992 on (with drakhmas converted into euros for the pre-2001 period). 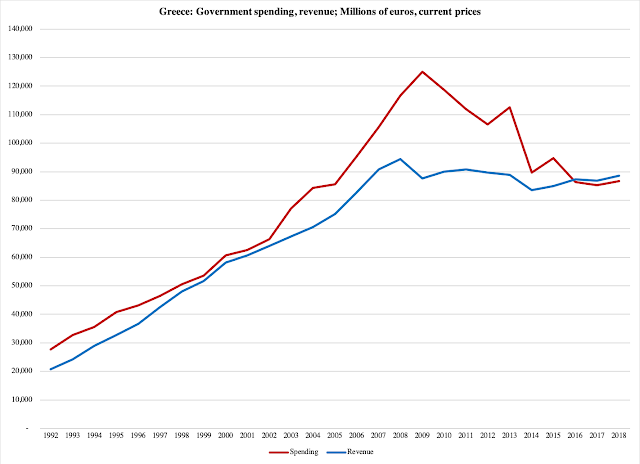 It has been suggested that the Greeks had problems with collecting tax revenue. As demonstrated by Figure 1a, this was not the case at all. From 1992 to 1999, government revenue grew at ten percent per year. From 2000 through 2008 the growth rate was 9.1 percent per year.

The problem, instead, was government spending. Let us take a closer look at Figure 1a: 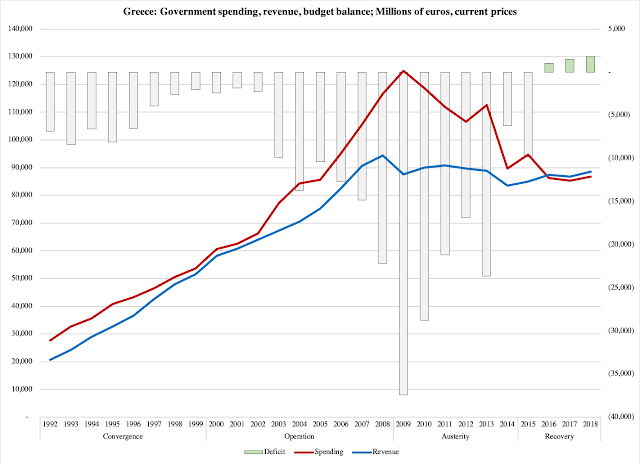 Just to demonstrate how notoriously over-spending the Greek government was, we divide the almost three decades of data into four periods:

Convergence, 1992-1999. This is where the member states of the EU tried to exercise fiscal discipline to comply with the budget-discipline criteria in the EU constitution. The Greek government was able to reduce its budget deficit from an excess of 20 percent of spending in the early '90s to a mere 3.8 percent in 1999. Spending, as we can see, kept growing through the latter half of that decade, but at less atrocious rates.
Operation, 2000-2008. As soon as the euro went live and the Greek government began operating under the common currency, they let go of their fiscal restraint. Spending, again, outgrew revenue - and let us bear in mind that revenue, again, grew at 9.1 percent per year during this period of time.
Austerity, 2009-2014. Here is where the crisis hit. After an interest rate shock and rates exceeding 20 percent, the Greek government opened a rapid-fire series of austerity packages. Aimed at slashing spending and raising taxes, these packages reduced government spending by a total of 28 percent.

We will get to the recovery phase later; what matters here is the austerity phase. While government cut spending by 28 percent, the economy went into a tailspin. One quarter of it vanished - the equivalent of $5 trillion disappearing from the U.S. economy - and with it, one quarter of the theoretical tax base. To compensate for the enormous loss of tax revenue, the Greek parliament implemented a long series of harsh tax hikes: taxes rose from 39 percent of the economy in 2009 to 50 percent in 2014.

Such dramatic tax hikes obviously destroy a lot of economic activity. Two thirds of all business investments vanished. Unemployment skyrocketed past 25 percent (60 percent among the young). Entitlement programs, meant to provide for people in hard times, were slashed with a fiscal chainsaw: 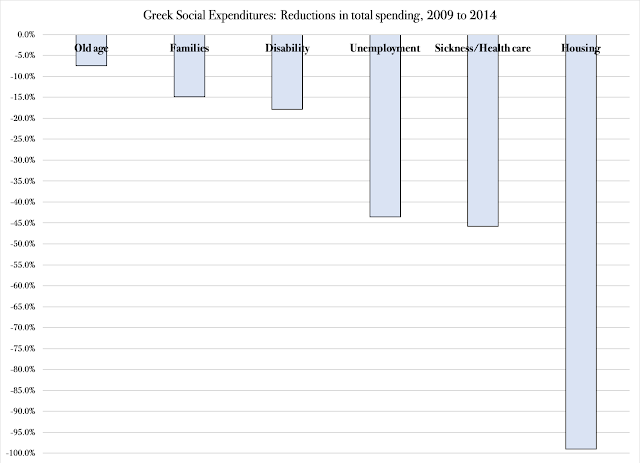 In 2012, Greece took to the terrible measure to unilaterally write down its own debt by one quarter. A partial debt default. It did not help, of course, but it goes to show the sheer desperation that guided policy making in Athens.

Will we end up there? Yes, if we do not start immediately after this coronavirus disruption; if we do not launch a credible, and strictly adhered-to plan to reduce our deficit; we will end up there. Taking us out of this regulatory freeze is a first step - but only a first one.
at April 13, 2020