Three Problems with the Pro-Lockdown Paper

A professor at the University of Wyoming suggests that it would cost the U.S. economy $5 trillion to relax the coronavirus epidemic restrictions. Here is what she does not tell you about her paper.


There are few things as dangerous in public policy as decision-making under uncertainty. The line between confident and ill-informed decisions is so thin it is sometimes not even visible. Yet politicians have to make decisions even when the outcome is highly uncertain.

The classic example is General Eisenhower on the eve of the Normandie invasion, but every president, every governor and most legislators will face situations of similar uncertainty - though of course with far less at stake - during their careers. The current public-health situation has many of these characteristics.

Specifically, the decision facing governors around the country, Mark Gordon here in Wyoming being no exception, is when to ease restrictions and allow the economy to go back to normal again. The uncertainty in this case has to do with the consequences of the two alternatives: ease restrictions or keep them in place.

This is a very consequential decision, one for which our governor needs the absolutely most astute information possible. The worst that can happen is that Governor Gordon is motivated to make his decision by ill-conceived analysis.

I fear that one of the parameters in play here will be the new study released by a group of economists over at University of Wyoming. Their paper, which concludes strongly in favor of keeping the economy locked down, reaches its conclusion based on a small but crucial set of assumptions. Changing just one variable - in this case the assumed growth trajectory of GDP - will dramatically tip their conclusion in the other direction, namely that it is far better to open the economy than to keep it locked down. More importantly: they reach their conclusion based on an estimate over a 30-year horizon.

As someone who has worked with uncertainty and forecasting in macroeconomic off and on for most of my career, I have to say that a 30-year forecast, especially one based on such tenuous assumptions as in this case, is nothing more than pure guesswork. I will show why in just a moment.

Sadly, the GDP variable is not the only one that stands out as questionable in the paper, whose lead author is Linda Thunström with University of Wyoming. It makes three key assumptions that, if moved just slightly, will nullify their conclusion.

To estimate the benefits of keeping the economy locked down, Thunström et al assume that the coronavirus spreads along estimates that are partly based on numbers reported out of China. There have been enough questions raised about the Chinese government's integrity on this issue to discredit any information coming out of there. We don't even have to delve into the questions regarding mass cremations and alleged substantial declines in cell-phone usage, all suggesting mass casualties far beyond the official accounts. All we need to do is look at the research that has been done on how China gathers and reports its GDP data; as much as one quarter of their annual growth could simply be non-existent.

A country with this record, and with the authoritarian government it has, is not a good starting place for any study of the coronavirus epidemic. It is certainly not a prudent source for a key variable in a study of the costs and benefits of keeping the U.S. economy locked down. If the Chinese numbers are exaggerated or under-reported, the balance in Thunström's study shifts dramatically one way or the other.

The second questionable variable in the study is the mortality rate. This rate differs dramatically between countries. For example, Sweden and Finland, neighbors and socio-economically very similar, have hugely disparate mortality rates: about 12 and about 2 percent, respectively. The Netherlands and South Korea, both high-density countries, also have dramatically different mortality rates.

In other words, even if the spread of the virus is accounted for with reasonable accuracy, the impact of the spread in terms of deaths - the key to Thunström's benefits estimate for the lockdown - is very difficult to nail down. Even a small change in this variable, say from five to two percent, will rapidly shift the outcome of the study in favor of opening the economy.

We should also note that there is no effort whatsoever in the paper to account for suicides caused by an economic depression. On the contrary, the paper concludes by pointing out that they deliberately left that variable out. Had they included it, the mortality rate from the coronavirus would have been much less significant in their cost-benefit analysis, simply by virtue of a death toll from their lockdown scenario. That death toll is now by default set at zero.

The third variable, again, is GDP growth. This one happens to be the most consequential of all in Thunström's study. Here, several mistakes are made, partly - I suspect - for lack of scholarship. Economists who normally don't work with economic policy tend to dismiss the impact of policy decisions on GDP growth.

It is worth noting that there is no methodological discussion in the paper about GDP growth. The paper simply assumes that GDP will grow by 1.75 percent per year - for the next 30 years. Thunström et al import this number from a Goldman-Sachs report and from the Congressional Budget Office. They do not refer to alternative studies showing a potentially higher growth rate - such as the Office of Management and Budget - nor do they explain why 1.75 percent is a reasonable number. It is, namely, historically low, especially for such a dramatically long period of time.

I cannot help but get the impression that Thunström et al chose this number to get the result they wanted. I hope I am wrong, and the authors are welcome to dispute this point here on my blog. However, to not discuss this essential variable and the assumptions behind it, is to open for serious questions regarding the integrity of their paper.

They could easily have corrected for this by presenting an alternative scenario where GDP grows by three percent. This growth rate is possible, even realistic, if Congress were to pass President Trump's FY2021 budget. This is an entirely possible scenario of the Republicans take back the House in the fall and keep their Senate majority.

I understand that Thunström et al dislike President Trump - it is their freedom to do so - but it is bad scholarship to let such preferences negatively affect a study that aims to have decisive public policy impact. To this point, consider Figure 1. It compares the growth of $100 worth of GDP in 2020 under, respectively, 1.75 percent per year and three percent per year: 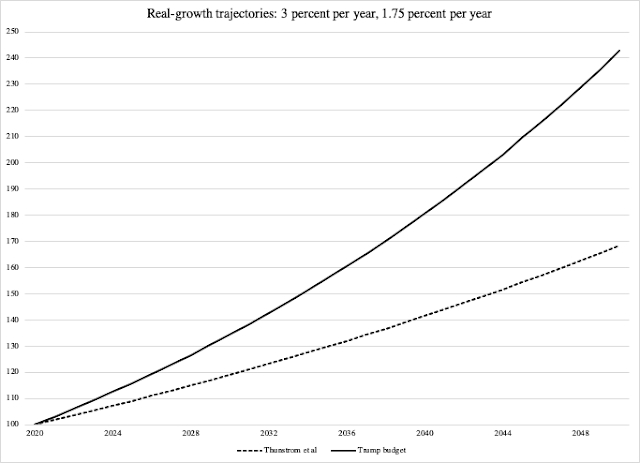 The authors of this paper are, of course, free to use their professional skills in whatever way they think best serves the taxpayers of Wyoming (who fund more than half of the budget of the University of Wyoming). Unfortunately, when that freedom is misused to produce sloppy research, and when that sloppy research is used to influence policy decisions, the outcome is almost always very negative.

I would urge Thunström et al to substantially revise their paper:

With these adjustments they would actually make a meaningful contribution to this the biggest public policy issue before us today.
at April 19, 2020