Sweden: Medicaid for All Meets Covid-19

Sweden is a bad example of how a country should respond to a public emergency, but the lockdown has nothing to do with it.


As I have said before, the decisive component in a country's ability to handle a public-health crisis like the coronavirus outbreak is not its ability to disrupt economic activity. The lockdown appears to have had very little effect on the spread of Covid-19. What matters is instead how the health care system is funded, organized and operated.

Here, more evidence keeps pouring in, and it is bad news for the proponents of single-payer health care. It looks increasingly as if private health-care funding is an instrumental component in the protection of public health.

Sweden is Ground Zero for anyone who wants to study what happens when Medicaid for All meets Covid-19.

Government-run health care systems suffer from two deficiencies, the first of which is its reliance on taxes for funding.

Health care costs increase over time by virtue of advancements in medical know-how, which includes but it not limited to medical technology. However, technology it a good example of what happens when you place a health-care system under the heavy hand of government. Forty years ago the total spending on medical technology in America amounted to 1.3 percent of our GDP; today that share is more than twice as high at 2.9 percent. If we had operated a Medicaid-for-All single payer system we would have been forced to keep that share constant - or raise taxes.

This does not sound like a dramatic increase - chump change really - but it translates into significant numbers. In 2017 we spent a total of $569 billion on medical technology, which includes durable technical instruments, non-durable instruments, prescription drugs, health-care facilities and the medical equipment needed for them to be operational.

If we had kept the med-tech share of GDP constant, spending on medical technology would have been limited to $267.4 billion. This would have meant a loss of more than $301 billion, begging the question what incentives entrepreneurs would have had to develop new technology for our health care system - and where our health-care treatments would have been with that much smaller a market for everything from prescription drugs to the instruments and techniques for surgical procedures.

Someone still needs to keep track of supplies, order supplies, pay for them, make sure deliveries were according to specifications, distribute the supplies within the hospital... Human resources staff still needs to make sure there are enough doctors, nurses, midwives, cleaning staff, procurement staff, computer experts and other employees throughout the health care system.

In a single-payer system there is another component at work: central planning of all resources. We would have a National Medicaid-for-All Agency that would sit in Washington and micro manage the appropriations for every hospital bed, every medical procedure, every drug prescription and every other transaction within the entire American health care system. That takes people, and people cost money.

Once all that is in place the system will freeze its costs, or else taxes will run through the roof. Returning to Sweden, their health care system costs every working adult 14 percent of their pre-tax income. The cost for hospitals, clinics, ambulatory care and rehabilitative care amounts to about 12.5 percent of Swedish GDP, so this tax does not cover the full cost. Health districts - regions or landsting as they used to be called - also get substantial funding from the central government. Including spending on elderly care, it is not unfair to assume that Swedish taxpayers surrender about 20 percent of their personal income to government, solely for the funding of their health care system.

What do they get for the money? To begin with, patients have to dole out a substantial amount of money out of pocket. Based on Eurostat health expenditures data, out-of-pocket costs - we know them as deductibles and copays - account for 16 percent of the total funding of Swedish health care. This, again, is money that Swedes have to dole out after having paid the world's highest taxes on it.

Unlike almost every other country in Europe, Sweden does not report the staffing structure of its health care system to Eurostat. For example, Greece does this, allowing us to see that 24 percent of all employees at Greek hospitals are medical doctors; about as many are nurses or midwives; just below 30 percent are other medical professionals or employees; and the rest are administrators.

No such profile is offered of the Swedish health care system. There is a good reason for this: Sweden is known to have a relatively small amount of medical doctors, relying instead on nurses and nursing associates (with half the education of a nurse) to perform health care. The American physician-assistant profession does not exist in Sweden.

We also cannot evaluate the density of health care professionals, an otherwise key number in terms of estimating the quality of a health care system. The lack of data is, of course, deliberate: by withholding its embarrassingly low-quality staffing structure, the Swedish government can maintain a pretense of still providing its citizens with world class health care.

There is, however, one metric that tells us a thing or two about health care quality: hospital beds. Figure 1 reports the number of hospital beds per 1,000 residents in all European countries for which the OECD provides this data since 1985: 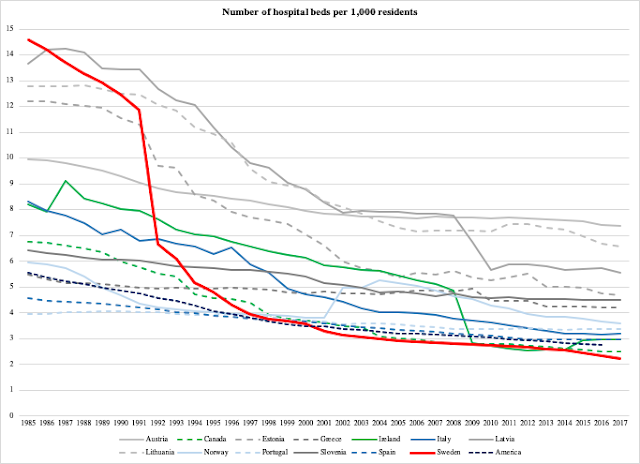 There is almost no data available for European countries from the OECD before 1985. Figure 2 has the numbers for the four countries where time series stretch all the way back to 1960: 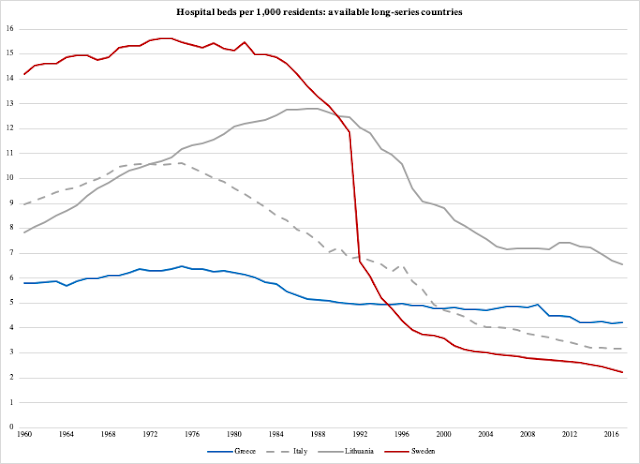 As far as Sweden is concerned, there is one distinct trend in both figures: the bed-per-capita ratio declines dramatically in the early 1990s. The government commits a virtual massacre on its hospital system, slashing the bed supply by half in a matter of two years.

Why? A deep recession hits the Swedish economy in 1990, sending GDP into a tailspin for three years. Despite tax hikes, topping 60 percent of GDP at one point, government still can't balance its budget. One of its many cost-slashing measures is to dramatically "reform" the health care system. The plunge in hospital bed supply is part of that "reform".

During the late 1980s and 1990s there was a trend across the industrialized world of reduced supply of hospital beds. The main reason was a shift from in-patient to out-patient treatment methods (thanks to advancements in medical know-how and technology). However, as Figure 1 explains, this trend was relatively symmetric internationally. Sweden was an exception - and a drastic one at that. In 1985 Sweden had the largest supply of hospital beds among these countries: a short 15 years later they had the fewest number of beds.

So long as the health care system can provide treatment on an out-patient basis, the decline in beds is of no consequence. The problem, of course, is when a public-health epidemic breaks out and its treatment requires large hospitalizations.

This is the point where single-payer health care meets Covid-19. According to the Swedish national public-health agency, Folkhälsomyndigheten, almost 12.3 percent of all confirmed cases end in the patient dying. Spain and Italy, two other single-payer countries with Covid-19 high death rates, also have a relatively small supply of beds.

The correlation, of course, is not perfect, but there is a clear tendency in its direction. Table 1 compares the number of beds per 1,000 citizens to Covid-19 death rates:

Again, there is no perfect correlation, but out of these 24 countries the 12 with the largest number of beds - an average of 6.2 - have a death rate of 5.7 percent. The lower half, with a bed average of 3.15, has an average death rate of 7.2 percent.

Returning to Sweden, which has the fifth highest death rate among these 24 countries, their rock bottom bed-per-capita ratio could have been much higher if they had run their economy differently. The reason why they made their enormous cuts in health care in the early 1990s is that they had built a welfare state far too big to be fiscally sustainable. Once the recession began in 1990 it was only a matter of time before the tax base would erode to a point where a galloping budget deficit would engulf the economy.

When they reached that point and government started panic-cutting spending, there was no room for prudent, productive reforms. The Swedish parliament resorted to slash-and-burn tactics, combining crippling tax hikes with devastating spending cuts. Had their economy been more European in nature, with a less burdensome welfare state, they would have had the opportunity to reform their health care system with a longer horizon in mind.

Just to give an idea of what this could have meant: if the Swedes had reduced the number of hospital beds along the same trajectory as Lithuania, today they would have had almost three times as many hospital beds: 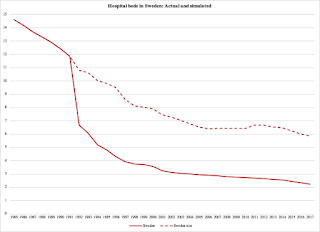 This would have placed them in the same category as Poland, Slovakia and - yes - Lithuania. These three countries have Covid-19 death rates well below five percent.

That said, Belgium, with 5.7 beds per 1,000 residents, has a death rate of 15.1 percent. It is conceivable, however, that their rate is affected by the high population density of their country, a variable of general relevance to any evaluation of Covid-19 responses. However, in terms of health policy it is only of tangential interest.

Again, there are two major policy conclusions to draw from the coronavirus epidemic: lockdowns don't work; and Medicaid for All would make us much more vulnerable when the next epidemic rolls in. A private health-care system is the only rational way forward.
at April 24, 2020