There will be a big bill for us all to pay for the restrictions put in place on our economy during this crisis. Our state legislators need to get started now on reforms that can keep their finances in good order. School choice is one place to start.

A total of nine states have now started working their way back to normal again from what Attorney General William Barr recently referred to as "draconian" lockdown measures. President Trump has also appointed a task force to roll back the nationwide restrictions.

That is the good news. The bad news is that - again - state governments are going to pay a hefty price for this disruption. If this return to normal goes reasonably fast, in other words does not drag on through May, the damage will be containable; our economy is fundamentally strong and the American people is eager to get back to work again. But even if this will be a fast and smooth process, governments will have lingering budget problems for years to come.

At the center of this problem will be the enormous federal budget deficit. We will at some point see austerity measures at the federal level - it is simply unavoidable - with repercussions for state programs dependent on federal money. Fortunately, there are things that states can do to avoid this, one being to initiate reforms of Medicaid to "bring home" as much as possible of funding of, and the legislative jurisdiction over, the program.

Another area ripe for reform is K-12 education, which, alongside Medicaid, is the largest item in state and local government budgets.

Unlike Medicaid, which is funded approximately equally by the federal government and the states, elementary and secondary education has remained largely a state and local matter. Federal dollars pay for a relatively small share of K-12 education: from 14.4 percent in New Mexico, 14.1 percent in Mississippi and 14 percent in Alaska down to 4.3 percent in Connecticut and Massachusetts and 4.1 percent in New Jersey.

Figure 1 has the full story (with our Mountain Region states highlighted): 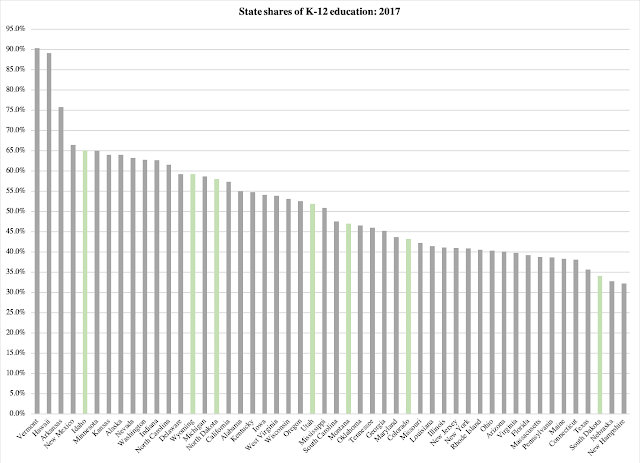 Vermont, notably, has a school-choice system called Town Tuitioning. It is an old system, dating back to 1869, that allows municipalities to offer families the choice of where to send their kids to school. It is unclear to what extent the state's school funding model benefits or inhibits school choice, but there is little doubt that if a state wants a school-choice reform, it is easier to execute that reform if funding is uniformly at either the state or local level.

Due to the small share of federal funds in K-12 appropriations, the local share is an almost perfect mirror image of state funding: 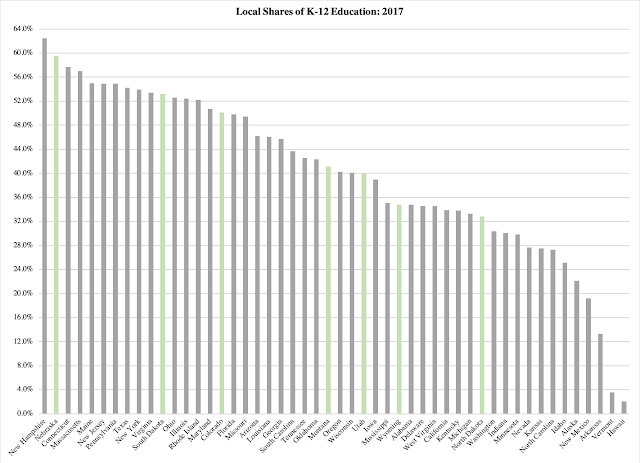 As for the Mountain Region states, the funding model varies noticeably, with South Dakota and Montana leading in dependency on federal funds (making them vulnerable to future Congressional austerity measures). Idaho and Wyoming have the largest state shares while Nebraska and South Dakota rely the most on local government funds:

Despite the variations in balance between state and local funding, the problem is the same across the region. Split funding creates a practical problem for school-choice reforms. It can certainly be done anyway: Arizona, the home of the Education Savings Account, divides K-12 funding between the state and local governments in a 40-to-46 percent balance, and the classic voucher state of Wisconsin puts the split at 53-40. However, neither model is universal - both come with eligibility restrictions making, e.g., only 22 percent of Arizona students eligible. The Wisconsin model comes with family income restrictions.

A school-choice model is a great way to keep K-12 expenditures in check; as demonstrated by an experiment on Wyoming school funding, the Arizona ESA can potentially cut costs by substantial amounts. However, to have the greatest possible impact on the cost of a state's K-12 education system, a school-choice reform should come with a reconfiguration of appropriations, from a split-funding model to one that relies either on the state or local governments.

A reform of this kind would be particularly beneficial to a state like South Dakota, which relies relatively heavily on the federal government and at the same time places a big funding responsibility on local governments.

Not only does a uniform funding model permit comprehensive school-choice reform, but it also opens for more taxpayer transparency and accountability. As I pointed out already 12 years ago in a paper for the Heritage Foundation, split funding blurs the lines between who is responsible before voters and taxpayers, and who is not.

There is a lot to be gained for the states that take the right initiatives at the right time. Governors and legislators who choose to be proactive will find their states to be in much better shape when Congress turns to fiscal austerity, than those whose elected officials did nothing to prepare for the budget storm.
at April 14, 2020