How the Welfare State Destroys America


There is a basic rule in public policy: when you explain a problem to your audience, you try to do it in as many ways as possible, because you never know which way will reach who. Every consumer of public-policy information has his or her own "hook": the one argument, picture, number or expression that makes them "get it". The more "hooks" you can throw out there, the more people you will reach with your information.

Sometimes, though, you produce a piece of information that is so compelling it transcends all other approaches, all other ways to explain a problem. Figure 1 below is a good example.

The welfare state is defined as federal and state government spending on housing and community services; health care and health insurance; education; and income security. The data covers both government consumption, in other words payments for services, and cash transfers such as TANF, WIC, EITC and Social Security.

Pain and simple, the most comprehensive measurement of the welfare state we have.

Sounds like it would be a cinch to pay for this welfare state, right? Sure - if we just look at this atemporally, everything looks fine. The problem is that outside of a socialist dreamland, time does nt stand still. Figure 1 explains how every $100 paying for this welfare state has grown over time. In 2018, the latest for which the Bureau of Economic Analysis reports these numbers, that $100 had grown into $9,887. Over a period of almost 60 years, we expanded the welfare state by 9,887 percent.

During the same period of time, every $100 of the tax base supposed to pay for that welfare state - GDP - expanded into $3,945. The welfare state has grown 2.5 times faster than the economy that pays its bills: 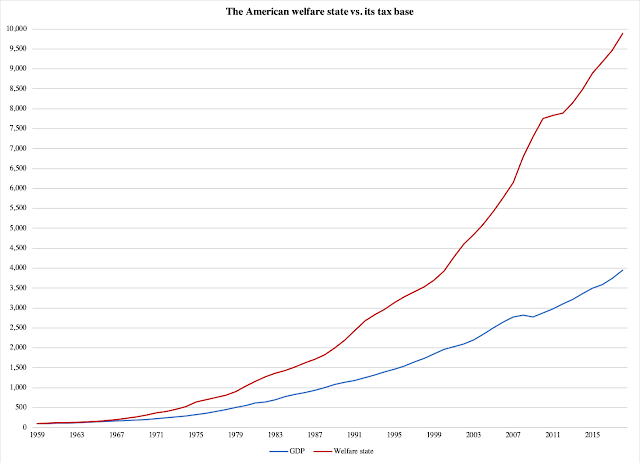 There is no sign of changes to the welfare-state trajectory. Since we are struggling to get GDP up to three percent real growth - a rate that we often exceeded in the 1960s-1990s - our ability to fund the welfare state is only going to weaken. Even if we take inflation into account when we calculate the growth of the tax base, we still cannot keep up with the welfare state:

And this is just to pay for spending under the welfare state. Then we have national defense, public safety, transportation and all other things we ask government to do for us.

Those other functions, however, have been pushed aside by our desire to redistribute income and consumption between citizens. Figure 2 shows how the functions of our federal, state and local governments have changed over time. Six decades ago we had a government with a split purpose: the welfare state cost about as much as national defense and public safety together. That, still, was a welfare state that had grown significantly since Franklin Roosevelt's administration when the first cornerstones of the American welfare state were put in place. Before FDR, government was almost exclusively focused on its core functions - and today that welfare state is the dominant purpose of government: 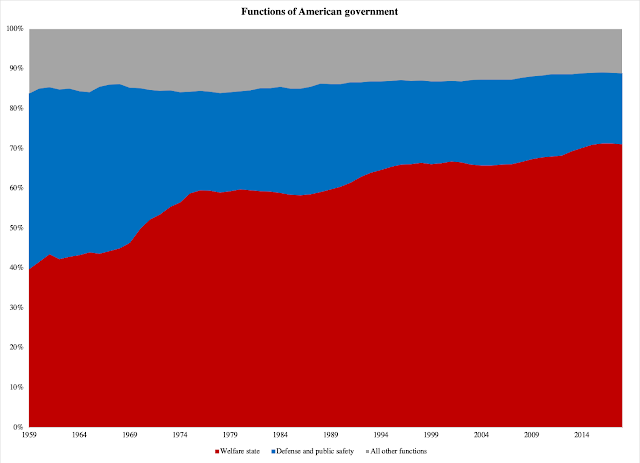 From 1959 and on, we transform government, with the big leap happening in 1964 when Lyndon Johnson declared war on poverty. Since then, again, the welfare state has completely consumed our government and reduced its core functions to a residual. In total, national defense and public safety account for less than 18 percent of all the money we spend on federal, state and local government; national defense, to be noted, is less than 15 percent of the current federal budget.

To sum up, Table 1 reports how the welfare state has grown annually compared to its broadest possible tax base, i.e., current-price GDP. Absurdly, the only decade during which the tax base has kept up with the welfare state is the 2010s (excluding 2019 for which we don't have all the numbers yet), when Obama refused to work on a budget with the Republican-led Congress. He also did not get any of the other entitlements he and his radical allies wanted, such as universal child care and paid family leave. This resulted in the federal government being funded on a continuing-resolution base - ironically the most fiscally conservative form for appropriations that we have available today:

Without sincerely long-sighted reforms to government spending, there is no doubt that the welfare state will once again outgrow its tax base. President Trump's budget for 2021 would mark the beginning of a return to higher GDP growth rates and government spending reform, but short of that budget passing Congress we can safely expect the gap from Figure 1 to continue to grow.

As the gap continues to expand, the end result is going to be a European-style fiscal crisis. We cannot, should not and must not let that happen. It would be devastating to the American economy:


We must not let it happen. We must roll back the welfare state, do it thoughtfully and make it happen while giving low-income families a path to full self sufficiency.
at April 07, 2020