The fallout from the coronavirus epidemic is going to be felt for a long time, and in places where we least expect it. Like negative interest rates, for example.


In response to the coronavirus epidemic, Congress passed a $2 trillion stimulus package, the biggest chunk of which is the CARES Act. The bulk of the new spending authority will go online during the 2020 fiscal year, and will increase the budget deficit by an estimated $1.6 trillion.

Yes, increase the deficit by $1.6 trillion.

We are looking at a total deficit of at least $2.6 trillion, but due to the economic shutdown it could rise above $3 trillion.

On a normal day, this equals about 15 percent of our GDP. That share will get higher due to a drop in economic activity; it is too early to tell how much GDP will decline, but catastrophic outlooks suggesting 20+ percent are about as likely as those suggesting less than eight percent. Since some states have already moved to reopen their economies - while others try their best to kill what they can of prosperity in their states - we will know in the very near future which way this recovery goes. Given the resiliency of the U.S. economy in general, and given how the Trump administration has suspended regulations in some key sectors, it is reasonable to expect a faster recovery rather than a slow one.

However, while the economy is looking brighter again in the short term, there are clouds gathering over the long-term outlook. The key problem here is the aforementioned, Gargantuan expansion of the budget deficit.

Some forecasts do not look too shabby. The Congressional Budget Office expects the aforementioned increase for 2020 and almost half-a-trillion dollars in 2021. After that, they suggest, it is basically back to normal again.

That is unlikely to happen. I am not all that impressed with the CBO's forecasting in the past, simply because they do not account for structural changes to the federal budget. This was vividly apparent around the early years of the Obama administration. It appears to be the case that the CBO is making a similar mistake with their CARES Act fallout estimates.

At the center of concern is the balance in spending embedded in the CARES Act. In their summary, the CBO reports:
The last number is pretty much on target with what the stimulus checks will cost. The increase in permanent spending is the big worry. While expected to stretch out over a ten-year period (as Congress always does, for no real reason), it is a more-than-safe bet that new spending programs will continue to rise.

For example, consider this from Doug Badger and Norbert Michel at the Heritage Foundation:

As the number of COVID-19 cases has spread in the U.S., many public officials have voiced their concerns over possible shortages of acute-care hospital beds, ICU beds, and equipment. Given the serious threat posed by COVID-19l such concern is certainly warranted. Still, there is good reason to believe that the U.S. health care system is in a better position than most other countries.

This is a stern reminder that we will likely see more government spending on health care in the wake of this epidemic. Indeed, Title III in the CARES Act, headlined "Supporting America's Health Care System in the Fight Against the Coronavirus", expands Medicare coverage to tele-health services, eliminates cost-sharing requirements for vaccines against COVID-19, raises Medicare provider rates and removes "near-term sequestration cuts to Medicare" and throws a chunk more money at the Department of Health and Human Services.

For sure, these are not dramatic expansions of government, just the business-as-usual mission creep of federal spending. The problem is that they foreshadow coming expansions: permanent growth in government spending is never the right answer to a temporary crisis, yet this is precisely what we see happening here.

In addition to this habit of growing government forever under the pretext of a temporary crisis, there is a great deal of worry coming from the funding side of this new deficit. The United States is on the doorstep of "going zero", i.e., plunging our interest rates to zero - or negative territory. The practical meaning of this would be that government can borrow money at no cost, or even make money doing it. This will give Congress an unprecedented incentive to grow spending like we have never seen before.

Here is how it works. In 2020 the U.S. Treasury wants to borrow $100. They issue a bond for ten years at zero interest rate. You buy that bond. After ten years you get $100 back. In the meantime, you collect zero dollars in interest. Zilch. Nothing. You don't see that money until 2030. Then, in 2021 they want to borrow another $100, now at -1 percent interest. You buy that ten-year bond as well. Again, you see no money for the duration of the bond, but once the bond matures you get $90.44 back. Your $100 has been reduced by the compound-interest effect of the annual -1 percent interest on your bond.

This is a far cheaper way to pay for government spending than to tax people. In addition to the lower political cost (no need to raise taxes) they can actually add up cumulative funding benefits. To pay you back in 2031, Congress needs only raise $90.44, but if they simply re-issue your bond they pocket the $9.56 on the new bond as an upfront benefit on the new debt, while positioning themselves to collect another $8.65 in 2041.

In theory, a negative interest rate is a way to reduce the deficit. In practice, it is a monumental incentive to grow government at a pace we have never seen before.

The path to sub-zero interest rates has already begun. Figure 1 reports the rates on the shortest and the longest Treasurys on a daily basis since January 1: 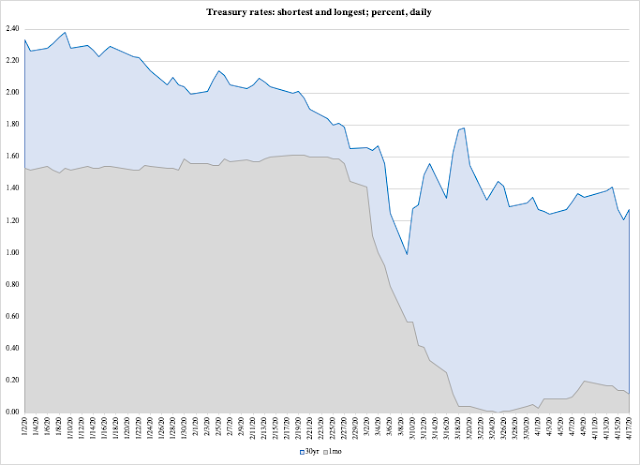 Breaking these rates down in more detail, Figure 2 shows how all the long-maturity Treasurys now come with a lower interest rate than the short-maturity ones did as recently as in February: 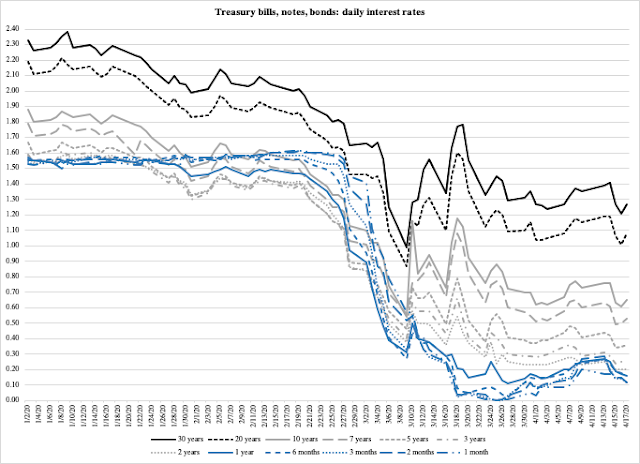 These drops in interest suggest that market demand for Treasurys has cut across all maturities. As Figure 3 explains, the volume in March was staggering by historic comparison - and please note that this time series stretches back to before the 9/11 attacks: 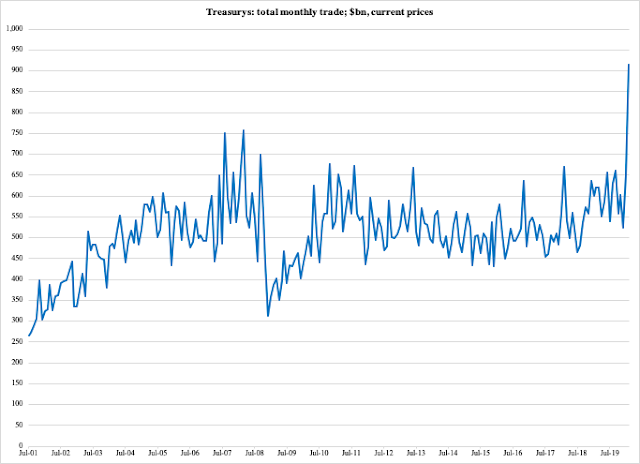 With only 20- and 30-year Treasury bonds yielding above one percent, the U.S. Treasury has now brought the American economy within a hair split's distance of Europe, where negative treasury rates have been in effect for several years. This promulgation of sub-zero interest rates has been driven in good part by a striking, recent rise in demand for Treasurys with a maturity longer than five years. Table 1a reports the increase in trade volume by type and maturity, annually as well as from last month (February in this case):

For comparison, Table 1b reports the same numbers for January, when the mainstream media was still downplaying the coronavirus epidemic:

The flight into long-term Treasurys has pushed the interest rates down from the top, a trend that is going to continue as Congress goes to work spending out the CARES Act appropriations. If the market will not absorb more government debt - and there are already signals that the banking system is saturated - the Federal Reserve will spring into action.

At this point, interest rates across the maturity spectrum will plummet; when the ten-year Treasury is below zero, we have effectively joined Europe in the sub-zero shadow realm. Once we do, there is no way back.

Why? Stay tuned for Part 2. Teaser: sub-zero interest rates are inextricably tied to industrial poverty and economic stagnation.
at April 20, 2020