WyoTABOR 1: Government at Half the Cost

Wyoming could benefit from its own version of the Colorado TABOR. Here are some numbers showing what difference it can make in terms of restraining growth in government.


One of the best bills of this legislative session was Representative Chuck Gray's TABOR, a.k.a., HJ0002. This bill took the generally successful Colorado TABOR and adapted it to Wyoming, primarily in the form of a stabilization mechanism for government spending that would accommodate the uniquely volatile nature of the Wyoming economy. Explains the bill:

Any surplus annual funds after the spending limits under paragraph (vii) of this subsection ... shall be distributed as determined by the legislature in the following amounts: Eighty percent (80%) to ninety percent (90%) of the surplus shall be deposited into reserve accounts, provided that not more than fifteen percent (15%) of this amount shall be placed in the permanent Wyoming mineral trust fund or other inviolate account. Funds deposited into reserve accounts under this subsection shall not be expended in the same fiscal biennium that the funds were determined to be surplus annual funds

The remaining 10-15 percent would be deposited "into capital accounts for future construction projects or other future improvements". These deposits also come with a biennial time lag.

There is also a five-percent return to taxpayers built into the bill.

Overall, this is a prudent approach that vouches for stability and predictability in government spending. But it gets better:

Districts shall have voter approval in advance for: any new tax, tax rate increase, mill levy above the mill levy for the prior year, valuation or assessment ratio increase for any property class, extension of an expiring tax or adoption of any tax policy directly causing a net tax revenue gain to any district; and the creation of any mutilple fiscal year direct or indirect district debt if the district does not have adequate present cash reserves pledged irrevocably and held for payments on the debt in all future years, except for refinancing district bonded debt at a lower interest rate or adding new employees to existing district pension plans.

This restraint on tax increases plugs two loopholes in the Colorado TABOR. The first has to do with local governments, which are not covered in the Centennial State version. Although there is no immediate evidence that the state government in Colorado has transferred spending authority to local governments to get around TABOR, there is a clear risk that this would happen here in Wyoming. Representative Gray saw this risk and deserves kudos for taking preemptive action.

The second loophole is the "enterprise" circumvention of the TABOR in Colorado. Since the state down there cannot raise taxes without voter approval, they have formed state-owned enterprises for some government functions. The enterprises then charge fees, not taxes, and do so at a rate that builds up surpluses in the enterprises. These surpluses can then be siphoned off into the state's General Fund.

Again, Representative Gray saw an opportunity to improve on the Colorado version, but as mentioned he also took the strong elements from the original and put them to work in WyoTABOR. This includes the spending cap, which in Gray's version reads as follows:

There are many ways to cap spending; this is one of the most transparent. It would also have tangible effects over time. Figure 1 reports a simulation of this particular spending cap, under two assumptions:

1. No voter approval for any increases in taxes, fees or other sources of revenue capped by this TABOR; and
2. There is no estimate of the growth in private-sector economic activity as a result of the lower cost of government.

This second point is unrealistic, of course. Under this simulation, in 2017 the total cost of our state and local governments would have been $5.2 billion, a full $5 billion less than what we actually paid. This is an enormous return of money to the private sector and would, of course have had major impact on all forms of private-sector economic activity.

A fully realistic picture of the effect of a WyoTABOR requires a comprehensive macroeconomic analysis to show how much more jobs and income our state would have enjoyed. That analysis takes time, though, so we will have to return to it later.

For now, let us look at the static effects of WyoTABOR on state spending. Inflation is measured as the national consumer price index for urban consumers, CPI-U, base year 1984; there is a CPI for the Mountain States, but it only runs back a couple of years and would not be helpful in simulating WyoTABOR.

We could have started earlier than 1992, were it not for the fact that the only comprehensive database on state and local government spending, published by the Census Bureau, begins with that year. With that said, behold the effects of WyoTABOR, had it been created in 1992: 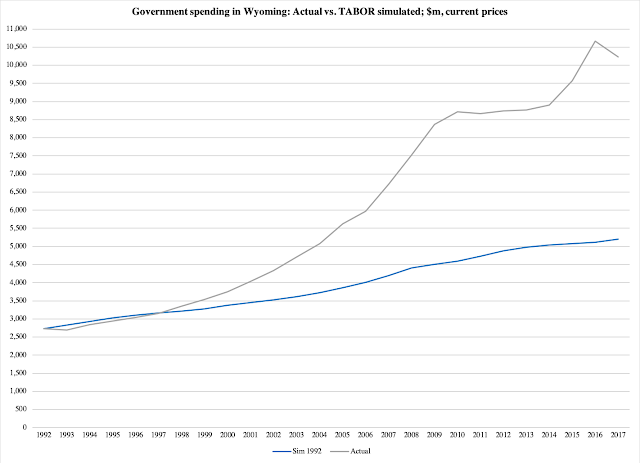 As mentioned, by 2017 total spending by state and local governments in Wyoming would have been just over half of its actual number. This is just an aggregate simulation - we will have to take a look at individual programs in a later article - but it gives us a good idea of the overall trajectory of government spending.

Assuming that the state workforce is proportionate to spending, we would of course have had much fewer people working for the state and for local governments: 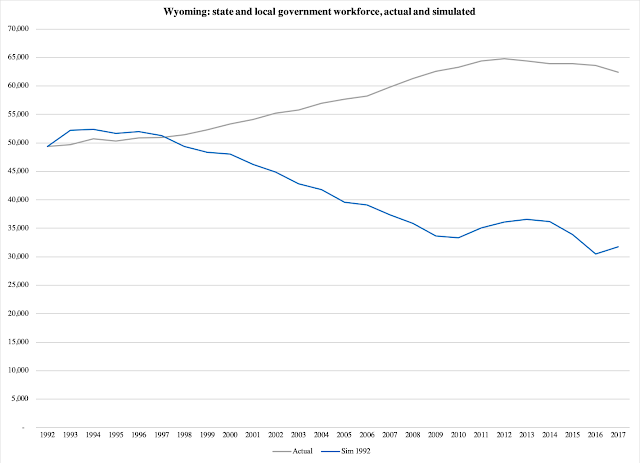 Our Government Employment Ratio, currently the highest in the country, would have been much smaller; how small is pointless to estimate until we have seen the positive macroeconomic effects on the private sector. Suffice it to say, though, that with a much smaller government and $5 billion more in private-sector pockets, there would have been a massive amount of new job opportunities in the private sector.

There would, plainly, have been an abundance of opportunities for the roughly 30,600 individuals whose government jobs would not have been there under WyoTABOR.

This is the first sketch of what Representative Gray's HJ2 could have done for our state, had it been enacted in the early 1990s. It is always a bit tricky to predict the future, but we also know that the past is a good approximation of what the future looks like. Unless the overall trend in government spending were to change drastically on its own, the best way for our legislators and our governor to guarantee restraint in government spending and - especially - in our state's tax burden, is to put a Wyoming-specific TABOR to work.
at March 03, 2020