Without millions of people leaving the workforce, Obama would have left office with unemployment in the double digits.


I have reported on several occasions on the strength of the Trump economy. Not only have we skipped a recession, due in 2017 or 2018, but in some key aspects we are now doing as well as we did under Reagan.

In other key aspects we are even doing better. Unemployment, for example, was at 5.5 percent at its lowest during the Reagan presidency. The annual rate for 2019 was 3.7 percent, the lowest it has been in literally 50 years.

The unemployment rate actually stood at 3.34 percent in the fourth quarter of last year. That is not a seasonally adjusted number; the standard procedure in labor-force statistics reporting is to use numbers adjusted for annual seasons. However, if we make a straight comparison of non-adjusted fourth-quarter numbers, we have to go back even a year farther, to 1968, to find a lower number.

That may not seem like much, but it means that 812,000 more people are in the workforce than would otherwise have been there.

This increase in the supply of labor has been paired with a substantial reduction in unemployment. In 2016 there were 7,751,000 unemployed Americans, which means 4.9 percent of the workforce were involuntarily without a job. In 2019 that number had declined to almost exactly six million, with, again, the unemployment rate at 3.7 percent.

When the workforce increases and unemployment declines, we are in very good shape. Figure 1 provides a historic comparison: 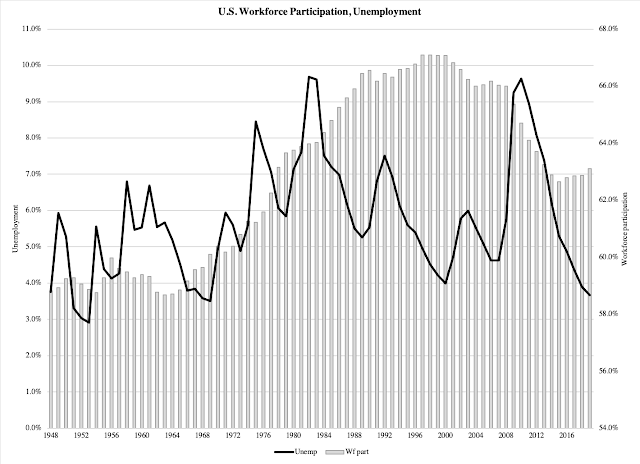 The Trump economy has broken a troubling trend from the Obama years, namely a steady drop in workforce participation. This decline is not inherently negative; increases and decreases can be both good and bad. During the Obama years, the decline was not for good reasons.

From the 1960s and on, more and more Americans joined the workforce, one reason being the rise in taxes forcing families to live on two incomes. In the first 20 years under President Johnson's tax-consuming War on Poverty, 1965-1985, the participation rate increased from 58.9 percent to 64.8 percent.

The rise slowed down after the first round of Reagan tax cuts, but continued to climb slowly due to the strong economy. Topping out at 66 percent when Reagan left office, it pushed upward again, marginally, during the strong Clinton years (and despite his early increase in the marginal income tax). When the Clinton economy was growing at more than four percent per year, workforce participation reached a record 67.1 percent.

After a minuscule decline to 66 percent as a result of the Millennium Recession, the Bush Jr. economy held the participation rate steady all the way up to the Great Recession. This is the period when, in Figure 1, unemployment shoots up sharply, topping out at 9.6 percent in 2010. This was more than twice the 4.6-percent rate of 2007.

During the Great Recession, people ran around with their hair on fire saying it was the worst economic crisis since the Great Depression. In terms of unemployment, this is not true: the rate stood at 9.2 percent in 1982, right as the stagflation period was reaching its peak. That said, the swiftness of the Great Recession was different and understandably took many Americans by surprise.

Unemployment began declining again in 2011, falling to 4.9 percent in Obama's last year in office. This looks like a good recovery, but it is actually not. Some of the decline is attributable to a sloth-like recovery that managed to generate some new jobs, despite its lethargic progress. It took the Sloth Recovery a full six years to create 12,372,000 new jobs, an average of just over two million jobs per year.

In its first three years, the Trump economy has created 2.9 million jobs per year - and this at a time when, statistically, we should have been in a recession.

What is worse, though, is that the Obama economy depressed workforce participation, and did so in a manner that almost looks intentional:

We have not seen this kind of decline since World War II. It is a disturbing decline in self determination, so steady and so protracted that it looks like it was done by design.

Was it? Let's leave the fine print of that for others to sort out. Statistically, there is a clue in the percentage of the workforce that had a job:

When workforce participation declines and the employed share of the workforce increases, it means, plainly, that the people who leave the workforce have given up on finding a job. It cannot be ruled out that Obama's generosity with assorted entitlements, from food stamps to disability, contributed to this workforce attrition.

The drop-out was substantial: by 2016, the workforce was 8.1 million men and women smaller than it would have been if workforce participation had remained at its 2008 level. Notably, in 2016 there were 7,751,000 Americans unemployed, down from 14.8 million when the recession bottomed out in 2010.

In other words, the Sloth Recovery looks like it reduced unemployment by 7,074,000 souls. In reality, though, the decline in workforce participation accounts for that entire reduction - and then some. If the workforce participation rate had remained at 66 percent throughout the Obama presidency, the real unemployment number would have been 15,884,000.

Plain and simple: Obama would have left office with an unemployment rate of 9.5 percent, not 4.9 percent.

We still have potential to grow. If we returned to 66 percent workforce participation, we would have another 7.5 million people seeking - and getting - gainful employment. To get an idea of what is yet to come: another 7.5 million Americans working is equal to another $1 trillion worth of economic activity in our economy. That alone is half a percentage point in growth, taking us yet closer to the three-percent growth rate that President Trump expects under his 2021 budget.

Increased employment has substantially good effects on all aspects of society. A job is not the end-all, be-all, but it is a bedrock component of a strong society, strong communities and, most important of all, strong families. It gives people the pride of self determination, helps them build financial strength and a more prosperous future.

To this point, the Trump economy has solidified another positive trend in the economy. Since the late 1960s, Americans have earned a smaller and smaller share of their personal income from work. Right as Lyndon Johnson's Great Society went to work imposing a socialist welfare state on the American economy, Americans earned approximately 72 percent of total income from employee compensation. That share declined steadily in the 1970s, flattened out around 68 percent during the '80s, only to decline modestly again in the '90s. It fell noticeably during the Bush Jr. administration, in good part because GDP growth had slowed from previous decades, thus generating smaller increases in wages and salaries.

In other words, American families are slowly working their way back to self determination. Figure 2 has the story: 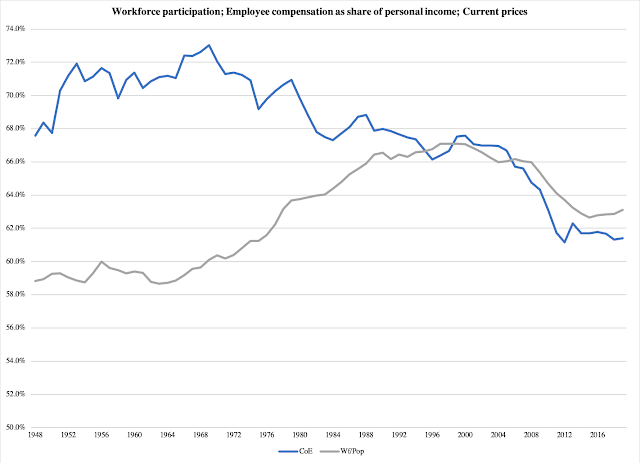 All in all, things look good in the Trump economy. Hopefully, there will be no disruption in his work to return America to prosperity. We need another presidential term with this kind of economy. If we get it, we will be well under way to great economic, social and moral prowess.
at March 06, 2020