A review of tax systems in some Western states.


While we have been fighting Taxmageddon here in Wyoming, there has been a more quiet discussion on the side about comprehensive tax reform. The disastrous proposals for a corporate income tax and other massive tax hikes have sometimes been sold as part of a reform effort, but there has never been a serious effort in that respect. Now that the income-tax efforts have once again been defeated, it is time for us to once again think about some kind of tax reform.

However, as with all tax reforms, it would have to happen under two strict conditions:

1. No revenue neutrality. The purpose of revenue-neutral tax reform is to secure that government does not lose any revenue in the bargain, even in the short term. When a reform is done under revenue neutrality it will inevitably increase the tax burden, especially in states with a history of budget problems.
2. First spending cuts, then tax reform. If a tax reform does not start with spending reform, it will only serve the purpose of draining the private sector for more money. The only way to guarantee good tax reform is to first reform government spending so that its cost to taxpayers goes down permanently.

Given that these conditions are fulfilled, a state-level tax reform could have some merits to it. To be fair, though, to Wyoming lawmakers, the Cowboy State is not alone out here in the West in its need for a spending-and-tax reform strategy. Neighboring states are struggling with similar issues at different levels. There is a serious discussion in Utah about tax reform, and Idaho legislators have begun the arduous process of reining in the state's increasingly burdensome property tax, though the measures put in place thus far do not seem to address the underlying spending problem.

Montana is even more of a conspicuous example: their Medicaid Expansion - a botched effort at improving health insurance access for the state's residents - has created a budget problem that remains unsolved.

In North Dakota, they have a revenue balance problem similar to Wyoming. In fact, of all the Western states North Dakota is probably the one that has suffered the most volatility in its economy in recent years. This is, of course, in good part the work of the oil boom in the state. Nevertheless, as with all governments, even the legislature in Bismarck has fallen for the temptation to spend more money when revenue is abundant. According to the National Association of State Budget Officers,

These spending hikes were reversed in subsequent years, with total state outlays for 2019 being estimated at about the same level as in 2014. However, the episode goes to show how easy it is to fall for the temptation that a surge in tax revenue brings.

It is likely that going forward, North Dakota will face increasing pressure for tax reform. As Figure 1 explains, using 2017 figures from the Census Bureau, the Peace Garden state has the same slanted revenue problem as Wyoming has, only perhaps even more accentuated. The black parts of the columns represent the share of total state and local government revenue that is sourced from property taxes; the dark blue segment represents sales tax revenue; light and dark grey, respectively, are individual and corporate income taxes; and all other taxes fall under the light green segment. Severance taxes on natural resources fall under the last category: 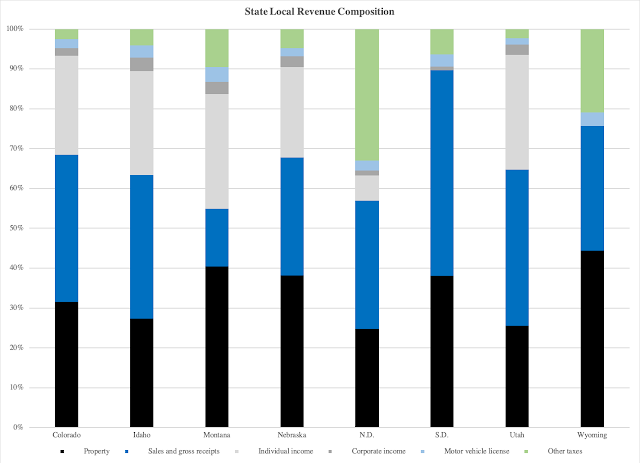 It is hardly surprising that property taxes are mostly a local-government revenue source. However, the revenue composition still varies significantly. Figure 2 reports the composition for state governments: 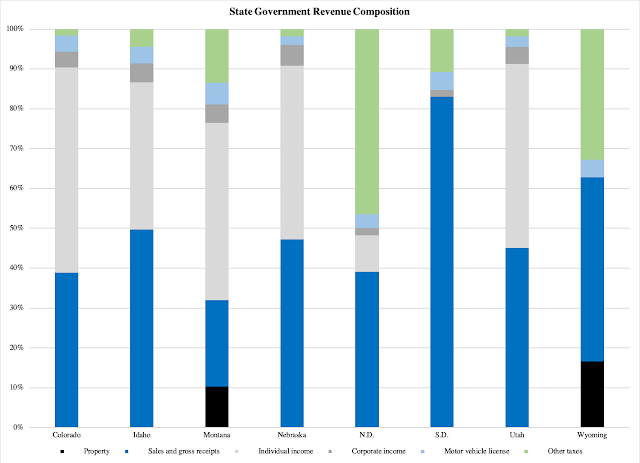 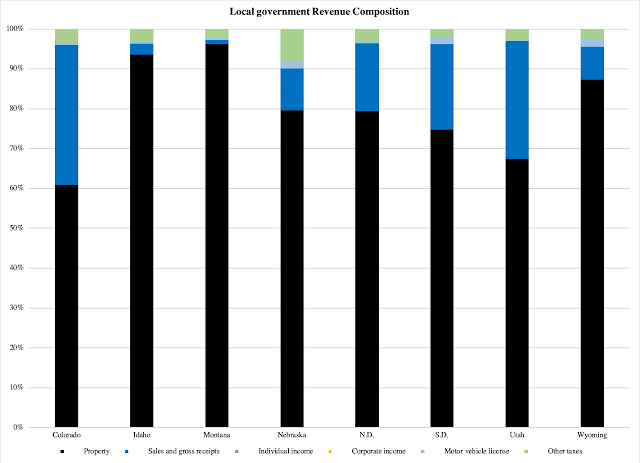 It is always a good idea to purify the revenue base for whatever government is needed. One way to do so is, again, to designate the sales tax as a state revenue source, with property taxes as the local-government source. With solid spending reform ahead of the tax reform, the reform would result in a tax system that is both sustainably light in its burden and transparent in its execution and function.

There is another side to tax reforms that is not often discussed: the role of inter-governmental funds. States get hundreds of billions of dollars from the federal government each year,  but there is also a substantial amount of money being transferred from the states down to local governments. Both these inter-government transfers are problematic:

The dependency of local governments on the state varies dramatically across the region, with Nebraska as the low-end outlier and Wyoming and North Dakota topping the league.

With a variety of tax systems, the Western states provide a mosaic of experiences and potential for reform. In a coming article we will look at their government spending over a longer period of time, putting this revenue review in its proper perspective.

---
*) The federal-funds dependency rates are not uncontroversial. The Census Bureau, being a federal agency, reports state-bound severance tax revenue collected on federal lands in that state as federal aid to that state. The National Association of State Budget Officers, on the other hand, reports that revenue as the state's own. By their state expenditure reports, the same number for Wyoming is less than 21 percent. Granted, this is expenditure, not revenue - which is what Table 1 reports - but in the aggregate the difference between the two numbers should only reflect the state's budget deficit. Which, as it happens, is not the case in Wyoming.
at March 24, 2020