Let these numbers be a lesson for next year's legislative session here in Wyoming...

It is a depressing read: things have gone from bad to worse since December.

Let us start with the big picture. Figure 1 reports the annual change in total private-sector employment, reported monthly, since January 2018. Note the sharp swing for the worse once the Revenue Committee passed the corporate income tax in August: 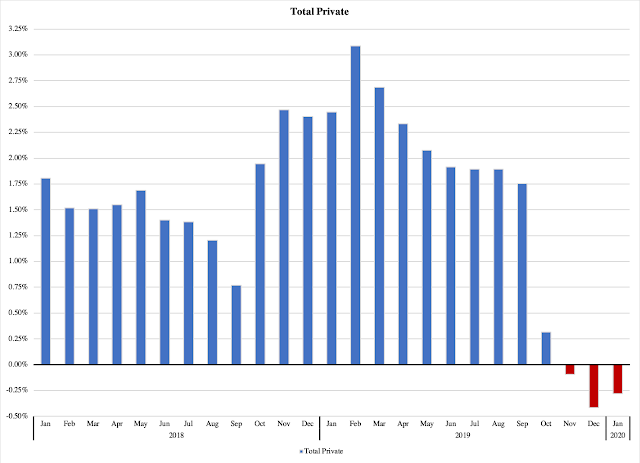 The decline stretches across almost the entire private sector. Five out of 13 industries (splitting Education and Health into two) show any growth in employment, with only two growing by more than one percent. The rest are downsizing:

If Wyoming had maintained in January the same year-to-year increase in private employment as we had in August, there would have been more than 4,600 extra employees in the private sector. To see the significance in this, imagine if all of those 4,600 left Wyoming and, on average, brought one spouse and one child with them.

It is not just jobs that are vanishing. Paychecks are also dwindling. In December, it was "only" jobs and weekly hours that were in decline; in January this year, the hourly wage is added to that list: 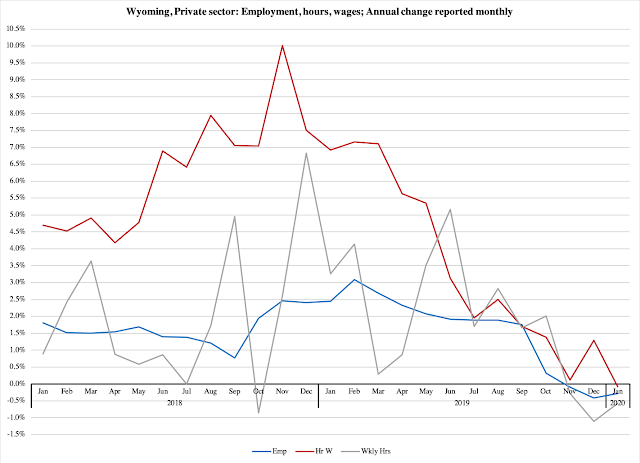 This is not a good picture for our state. Fortunately, the corporate income tax died on the doorsteps of the state Capitol, so we can probably expect better employment numbers in the second quarter of this year. However, if the legislative leadership brings back the corporate income tax one more time, the decline we have seen now will continue.
at March 16, 2020