The generation that had to google how to use a wrench is growing up and becoming good, old Americans. The Millennials are in fact reviving some of the most essential character traits of our country.


In the midst of this virus craze it is worth remembering, again, that the U.S. economy is strong and solid - in some ways more so than it has been in decades. As soon as this frenzy dies down - and the president is already suggesting that it will all wind down soon - this economy will go back up to where it was.

That said, there are some underlying structural data that we need to be mindful of. They paint a picture of what appears to be a long-term shift in consumer behavior, one that puts more pressure on banks but at the same time leaves American families better off. This shift belongs in the context of what I said recently about the finances of the federal government and the banking industry: the deeper government go into debt, the more difficult a situation we could be putting our banks in. Their portfolios are loaded up with minimum-yielding Treasurys, but they also suffer from the overall low interest-rate level we have across the economy.

Taken together, all real estate loans account for about one quarter of commercial-bank assets (including mortgage-backed Treasurys). This is the same share it was at in the '90s; during the 2000s the share increased steadily to top out at 34 percent right before the Great Recession. After the purge - of sorts - of real estate loans during the early years of the recovery, this type of bank asset stabilized around one quarter of bank portfolios.

If that was all there was to it, we might not have much to worry about as far as bank portfolios go. However, with the low interest rates and a long recovery, people have combined better credit scores with cost-cutting mortgage refinancing. This, of course, has left households with more money and strengthened consumer finances up and above where they have been since at least the '90s. However, it has also come with a new trend in real estate that, on the one hand, leaves American families better off but on the other hand makes it harder for banks to make money.

Figure 1 gives a partial picture of household wealth, looking at investments in - purchases of - real estate and consumer durables compared to the depreciation of the total stock of both assets. The inflation-adjusted numbers break even at $100: when the value exceeds $100 total purchases of the asset exceed the value loss from depreciation; when the value falls below $100 depreciation is faster. The data, which is reported by the Bureau of Economic Analysis for the past 20 years, shows a remarkable trend shift in real estate with the Great Recession: 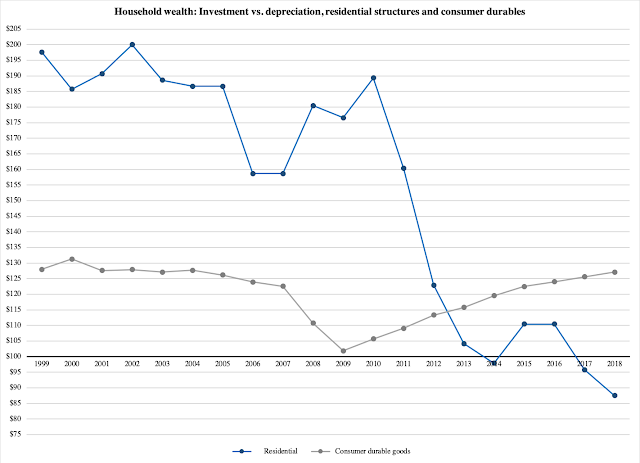 Before the last big economic crisis, households spent more on buying new homes and upgrading existing homes than they lost from all forms of value depreciation. Once the crisis was over, household investments in real estate have just about kept up with depreciation; in fact, the trend is negative since 2016.

It is difficult to explain this trend in an economy that is doing better than it has in decades, but there is one plausible trend at work here. Today's younger families - the Millenial generation that is now in their 30s - came into adulthood right as the Great Recession was holding the economy in a firm grip. We grown-ups often shake our heads at this generation for having to google everything including how to use a wrench, but we should also recognize them for having acquired a sense of frugality and personal financial responsibility. In a manner that is somewhat reminiscent of what happened after the Great Depression in the 1930s, the Millennial generation has learned that they have to work their fingers to the bones for everything they want.

Plainly, they are not as interested as their parents' generation in going overboard with debt. One way this shows up in our statistics is as displayed in Figure 1: younger families are less interested in living in big, fancy homes than especially the generation before them. They also tend to move to cheaper, smaller, more rural communities as the cost of living in big cities has become prohibitively ridiculous.

The second trend in Figure 1 reinforces the impression of financial responsibility. One of the key items in consumer durables is passenger vehicles. It appears to be the case that households gladly make investments here, and increasingly so. This trend is slowly but steadily pointing upward, as if American families - including the Millennials - have responsibly decided that it is more important to have a good car, well working appliances and computers and other durables, than to live in an inordinately big house.

If the real-estate trend is indeed partly driven by a deliberate, relative downshift in home standards, and if this downshift is driven in part by geographically more flexible lifestyle choices, then it also makes sense that American families today invest more in their vehicles.

Figure 2 reports the real-estate investment trend (left vertical axis) together with two other trends: household savings as share of personal income (S/Y; right axis) and household debt costs as share of personal income (D/Y; right). The comparison is striking: while American families today choose to live less conspicuously than their parents, choosing in the bargain to have less burdensome debt, they also save a larger share of their incomes.* 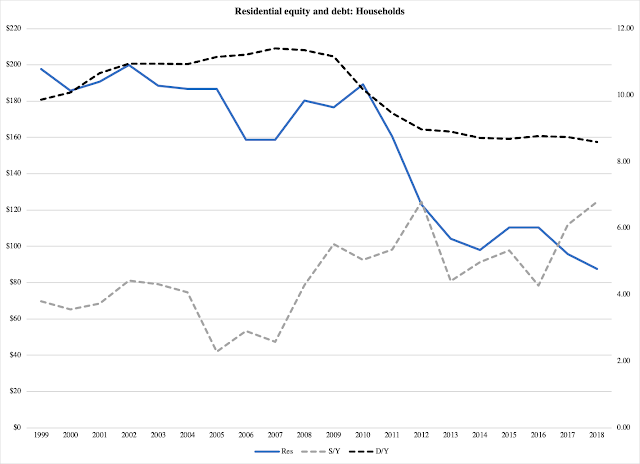 Again, all this is leaving American families in better shape financially than they have been since at least President Reagan was in office. The 1990s was a good decade from a macroeconomic viewpoint, but it was also the decade when America's consumers learned to love the debt. Banks elevated real-estate lending as part of their portfolios, took a bad beating for it in the Great Recession and are still struggling with building asset portfolios that pay solid profits (and solid wages, salaries, benefits, dividends to those who invest for retirement...).

To make matters more problematic for them, they took the Treasury bait and bought boat loads of government debt, especially mortgage-backed securities. If Congress is going to continue to run chronic deficits - and with its current configuration that is as predictable as the sun will rise tomorrow - the banks will continue to struggle with this part of their portfolios.

On the upside, there has been a shift in the real-estate loan portfolio away from residential toward commercial. In late 2019, according to Federal Reserve data, commercial loans exceeded residential loans in real-estate lending for the first time since the bank began separating the two in their data. This is positive, of course, and yet another sign of the strength of the Trump economy.

Then, again, is the increase in investments in consumer durables. There is a growing market for credit there, but there is a limit to how much money banks can make here, especially if they want to compensate for ultra-low interest rates on Treasurys and mortgages.

We need, simply, a more sound, sustainable level of interest rates across our economy. We don't need high rates, just enough to let our commercial banks make reasonable margins. The key to getting there is a tectonic shift in Congressional spending habits, away from using deficits as a permanent "revenue" source.

Households would also benefit from higher interest rates. With a young generation responsibly looking after their finances, higher-yielding savings opportunities would elevate America's families to new heights of financial self-determination. They would gain a lot more liberty to chart their own course in life, in a way we have not seen for maybe three generations.

The key, again, is government fiscal responsibility. Will the Millennials remember this when they vote in November?

---
*) The debt and savings ratios are measured in current prices, while the real estate trend, imported from Figure 1, is in inflation-adjusted terms. This makes for an imperfect comparison and would not (rightly so) hold up in the court of scholarly scrutiny, but for the sole purpose of illustrating household trends it works adequately.
at March 23, 2020