Jobs and People: Wyoming Losing Both

More numbers showing how Wyoming is losing both jobs and people to other states. But I'm sure that if we just raise taxes high enough, businesses will come a'rushin across the border, eager to give their money away to our big, shiny government...


Back in January I reported that Wyoming has lost population three and a half years in a row now. I also noted that in the last quarter of 2019 we had the worst labor market of all the 50 states.

It stands to reason that if the legislative leadership in a state does everything in its power to raise taxes and make it costlier and less predictable to do business in Wyoming, then businesses will respond accordingly. In last year's issue of the CNBC study of state business climates, Wyoming ranked smack-dab in the middle, at 26th place.

We did reasonably well on infrastructure - in other words, we don't need to make massive investments in WyoFlot and other big, shiny infrastructure projects. What we need, though, is a solid funding model for our existing infrastructure.

Two areas in dire need of improvement are "technology and innovation" and "access to capital". The first category can easily be improved if we reduce state funding of the University of Wyoming, force them to seek out private partnerships and to compete for competence and capital.

The second category is a recurring theme in the CNBC studies. For as long as I have been tracking these studies, we have ranked near or at the bottom in terms of venture-capital access. I have never had time to study why this is the case, but it is worth noting that corporate welfare (a.k.a., economic development) is not venture capital. Tax-paid handouts to businesses are not based on business assessments of risk and return, but on political considerations.

Unfortunately, corporate welfare enjoys a certain popularity here in Wyoming. This helps explain the shortage of risk-based capital in our state; why would you venture into new business projects in a state where you are likely to encounter competitors with solid backing from tax-guaranteed money?

Since corporate welfare does not have any identifiable effects on economic growth, the profligacy with which we dole out tax-paid money under this banner is a major contributing factor to the stagnant nature of our state's economy. The unrelenting chatter about raising taxes does not exactly help, but instead exacerbates the weakness of our state's economy.

What seems to be lost on those who advocate tax hikes is that there is a direct correlation between private-sector jobs creation and interstate migration. I have written previously about the effects of bad economic policy on state population; back in December, e.g., I explained how high-tax states drive people to leave. Figure 1 adds another angle to this, reporting the relationship between interstate migration and private-sector job growth, both in 2018. The 50 states are divided into quintiles, with the states with the highest migration net (columns) clustered together in Quintile I and the states that lost most population in Quintile V: 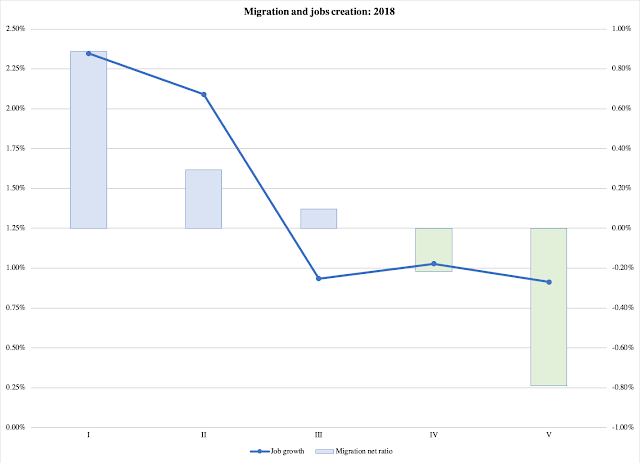 The ten states with the highest net inbound migration - that gained the most people - were as follows (with jobs creation in italic):

On average, these states saw a 2.35-percent growth in jobs and a 0.9-percent migration-based population increase.

By contrast, the ten states that suffered the biggest population losses were:

Here, jobs growth was only 0.9 percent - a good chunk of which is attributable to tech-jobs growth in California - and the migration net was -0.8 percent of population.

Jobs are created where businesses see the lowest costs (which, for all of you in Rio Linda, includes taxes), the best financing opportunities and the most predictable overall business climate. Wyoming is not one of those states. As I have already explained on numerous occasions - here is one example - our state has one of the costliest governments in the country. It should not come as a surprise to anyone (except perhaps those of you in Rio Linda) that this high cost also depresses private-sector job creation.

Contrary to prevailing socialist mythology, people in general want to provide for themselves. While many socialists see no problem in living off their neighbors, most Americans actually want to pay their own way through life. Therefore, when a state is scarce on jobs and other professional-growth opportunities, they move where the opportunities are better. Figure 2 reports net migration, in actual numbers, between Wyoming and other states (with red representing population loss): 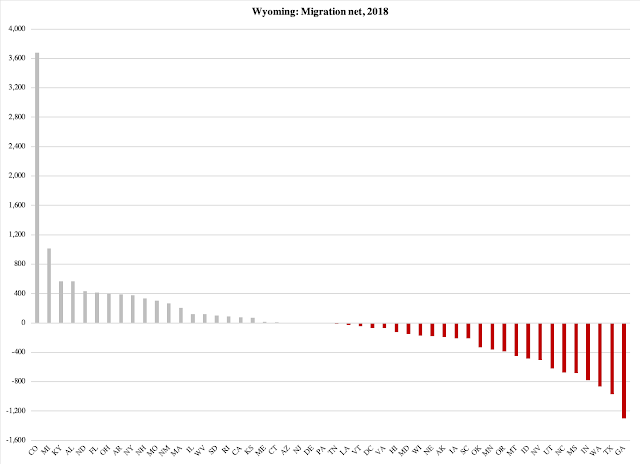 At 3,681 people, we got the biggest net inflow from Colorado. A total of 5,632 Coloradans moved here and 1,951 people moved the other way. Colorado also accounted for the biggest inbound migration to Wyoming: 21.9 percent, to be exact.

Texas is an interesting contrast, with 2,327 Wyomingites moving to the Lone Star State but only 1,354 Texans moving here. Only Georgia saw a larger net gain from us: while 1,339 people moved from here to Georgia, only 40 people moved the other way.

Inbound migration to Wyoming was fairly concentrated in 2018, with about one third of the people who moved here leaving Colorado, Montana and Texas. Outbound migration was more spread out, but the same three states were at the top, though in the opposite order. Here, though, they only accounted for 22 percent of all migration.

All in all, 26,078 people left Wyoming in 2018 and 25,095 moved here, for a net loss of almost 1,000 people. This means a 0.17-percent decline in population due to migration. This is a modest loss by comparison - Alaska and New York lost more than one percent of their population to outbounders outnumbering inbounders - but it is nevertheless a loss. Among our neighbors, Idaho gained 1.4 percent thanks to it being a popular U-Haul destination. Montana saw a net growth of 0.7 percent from migration, with Colorado right behind at 0.6 percent and Utah at 0.3 percent.

We had a net outflow to all these states except Colorado. However, if our legislature actually gets to pass its tax hikes and create their long sought-after income tax, it will only be a matter of time before those U-Hauls start going south again.
at March 05, 2020