Move over, Germany. The Hungarian economy is so strong even BMW is building cars there.


Back in June last year I reported that Hungary had the strongest economy in Europe. In January I confirmed that the Magyars were still leading the Old World in consumer spending and capital formation, while being just a split hair's distance behind Ireland in GDP growth.

We now have the full picture of 2019, courtesy of Eurostat, and Hungary remains a top performer:

The Irish top spot is not as good as it looks. Before we get there, though, it is interesting to note that eastern Europe dominates at the top while the core economies of Europe, Germany, Italy, France, Belgium and the Netherlands, all have growth at a third to a half of what they have in the east. Even the Nordic countries fall behind eastern Europe.

It is common in northern and western Europe to look big-brotherly over to the east. Perhaps it is time for a change of attitude.

Back to Ireland. While they once again claim the top spot in quarterly GDP growth, it is worth being a bit cautious about their apparently formidable record. A breakdown of these numbers explains why. First, here are the numbers for private consumption:

The Irish fall quite a bit behind the top performers, suggesting that their growth is not necessarily trickling down to the broader layers of the population. But it gets worse - here are the stunning numbers on gross fixed capital formation, i.e., business investments:

I have warned before that the Irish economy exhibits some serious signs of unhealthy volatility. To reinforce this point, here are the annual growth rates of business investments in Ireland; Hungary is thrown in for comparison: 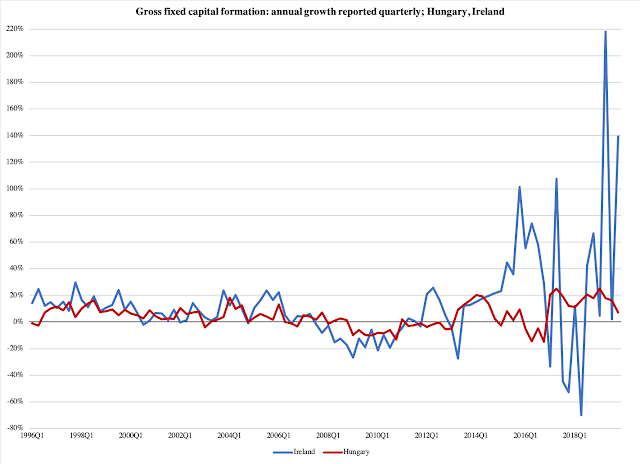 The rapid - and stunning - rise in investment volatility suggests that the Irish economy has become increasingly mono-industrial. It exhibits character traits comparable to economies that depend heavily on raw materials (Alaska and Wyoming come to mind), although in the Irish case it is likely a matter of computer-related businesses locating European-oriented activities to the green island for tax-friendly purposes.

That said, regardless of what industry is behind their highly volatile investment pattern, it is never a good idea for a government to conduct fiscal and regulatory policies in such a way that you effectively become a mono-industrial economy. It has many negative effects that we will look at in a separate article; for now, let us simply note that Hungary - to stick to that example - achieves about the same growth rates as Ireland does, but with far more macroeconomic and structural stability to go with it.

In addition to private consumption and business investments, government spending is the third leg of domestic demand. In a sound economy, it does not grow very fast over time; in particular, over the long term it should not outgrow private consumption. Nevertheless, some European countries rely on quite a bit on it:

In addition to being unstable in terms of business investments, the Irish economy also suffers under a fiscal-policy regime that does not contribute to macroeconomic stability. On the contrary, it actually functions as an amplifier for swings in the private sector. The Hungarian government uses its fiscal policy differently, namely to provide macroeconomic stability over the longer term. 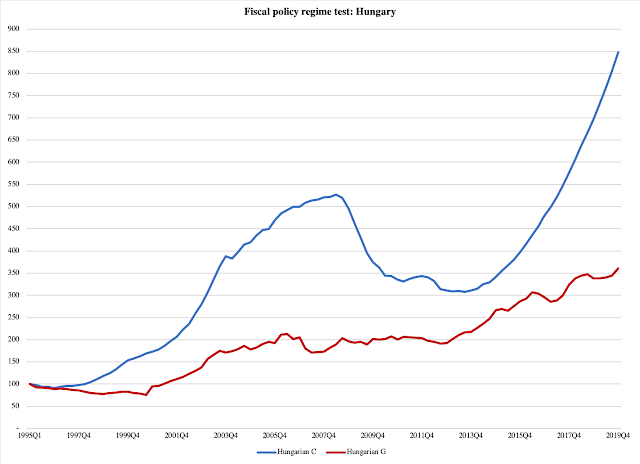 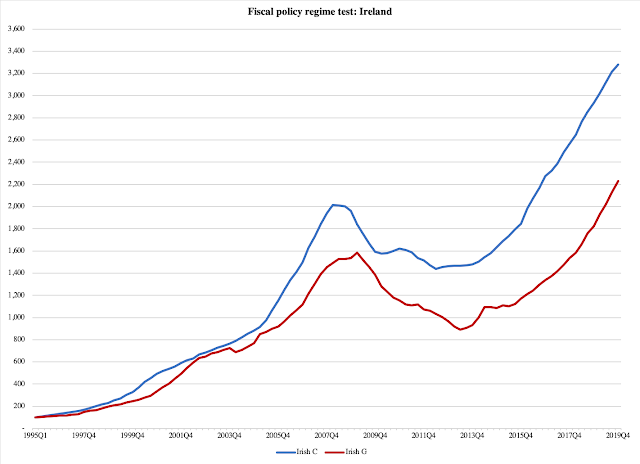 The Irish fiscal policy regime amplifies growth periods, contributing to the unstable surge in growth, but it also amplifies recessions. By exacerbating instability, the Irish government actually aggravates the mono-industrial nature of the country's economy.

This is a point we will elaborate more on in coming articles; for now, let us once again take our hats off and congratulate the Hungarians on a job well done. They are not only building prosperity in a way that many other parts of Europe no longer appear to be capable of, but they are also showing that it is indeed possible for an economy to exceed  three, even four percent GDP growth for a sustained period of time.
at March 13, 2020