February was the last month before the coronavirus-imposed regulatory disruption.


I repeat my advice: do not pay attention to any macroeconomic numbers until June. March, April and May will all be artificially affected by the disruption.

The state-by-state jobs numbers from February give us a good idea of where the economy "left off" before the disruption. We also get a good idea of what levels we can expect to get back to once the regulations are lifted.

Starting today with a quick overview, we notice that 41 states saw annual growth in private-sector employment. Six states exceeded two percent jobs growth, two of which are in our region: Utah at 2.9 percent and Idaho at 2.5 percent. Wyoming, we should note, was second from the bottom, with 0.9 percent fewer private-sector jobs in February this year compared to last year: 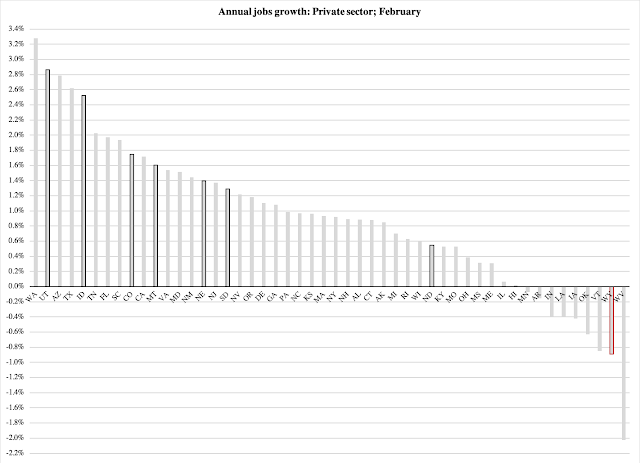 Our neighbor states did fairly well, all of them seeing growth in jobs. However, the trends are mixed. In five states, job growth tapered off:

In other words, the economy in the Mountain States region is generally strong. Utah, again, comes out at the top, and with the second-strongest performance in the nation they remain an economic role model. As I reported yesterday, their performance in terms of employee compensation is at the top of the country.

Wyoming remains the troubled child. In a coming article we will get a better picture of where our state actually is at this time. A review hours and wages will tell us if our record from January stands: Wyoming was the only state that started 2020 with a loss of jobs, wages and hours worked. Let us hope that is not the case in the February numbers.
at March 31, 2020