The eminent Bureau of Economic Analysis (BEA) has released prototype data over income distribution. This is a test, of sorts, of a new type of statistical product from the BEA, one that adds valuable information about the U.S. economy in general, and about the role of government in particular.

Income distribution is often brought up in the political debate, especially under the banner of income inequality. The concept of inequality itself is normatively loaded, suggesting that lower-income earners somehow are cheated out of part of their income. We are not going to delve into the theoretical origins of that argument (although for those interested I covered the core of Marxist economic theory in my book Faith and Freedom: The Moral Case for America) but it is worth noting that there is widespread consensus today across the ideological divide over policies aimed at reducing income differences. These policies are also known as the welfare state.

The new BEA data provides two important pieces of information that are not surprising, but nice to see confirmed (again):

1. Income distribution in the United States is fairly stable; it is not the case that the rich are getting richer and the poor are getting poorer. Those who claim that there is a growing divide often confuse equity - wealth - with income. The small variations we can see in income parities between citizens are due essentially to two variables: the business cycle and equity-based income.
2. Government clearly redistributes income, through both taxes and the entitlements it pays out.

About a year ago I addressed the first point based on IRS income data. I explained that most of the changes in pre-tax income differences in the past 50 years could be attributed to substantial increases in equity-based earnings (interest, dividends, capital gains, etc). The second point will be addressed below, albeit briefly for now.

To begin with, Figure 1 presents a "map" of how personal income is distributed between the deciles of income earners in the BEA data. Their data covers 2007-2016, with the numbers for the latest year being reported here: 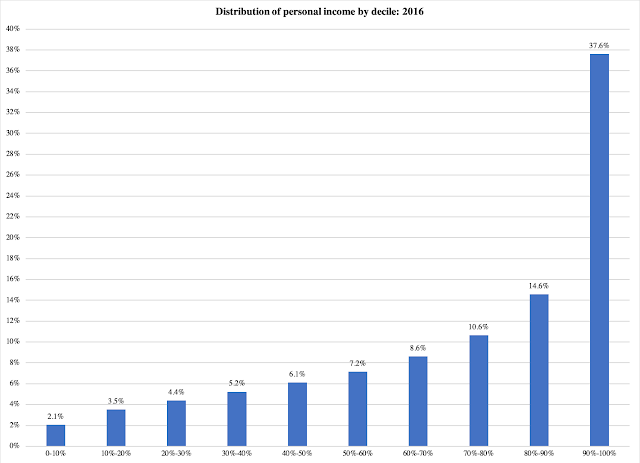 To the point of where people get their income from, Figure 2 reports the shares of personal income that originate in, respectively, employee compensation and equity. Here, the percentages represent the share of income for each decile that comes from, respectively, work (CoE or compensation of employees), investments or equity, and transfers or tax-paid entitlements. An interesting pattern emerges: 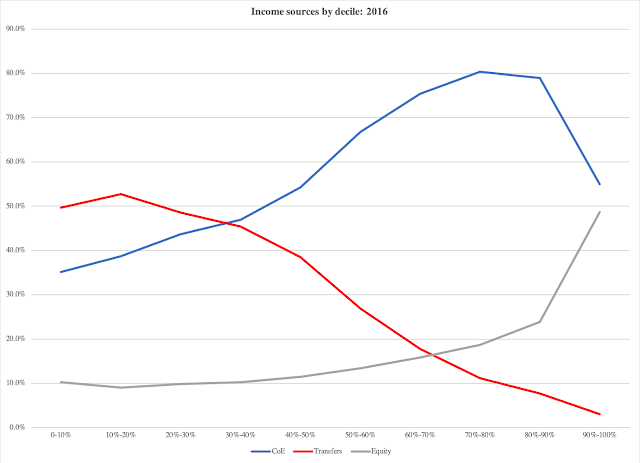 For the lowest-earning 30 percent of the population, tax-paid entitlements are more important for their income than money earned from work. This is the inescapable result of half a century of growth in the egalitarian, American welfare state.

Another interesting piece of information from Figure 2 is the sharp rise in equity-based earnings from the 80th to the 90th percentile. As I explained back in April of last year, once a household earns more than $500,000 only about half of their income comes from work; for the group making $1 million or more that share is below one third.

One of the effects of the high dependency on equity-based income is, again, that high-earning households pull away from the rest when equity markets are doing well. The swings are not dramatic, but they are visible in the BEA data. Table 1 reports the share of equity-based income in the highest decile. For comparison, the second data column reports the income-difference measuring Gini coefficient; the lower the Gini coefficient, the smaller the income differences:

The variations are small, no doubt, but it is nevertheless interesting to note that when the equity share of the highest-decile income goes down, the Gini coefficient fall as well. Plain and simple: the less people earn from investments, the smaller our income differences are.

The shares are remarkably stable over time.

At the other end of the income spectrum, as mentioned tax-paid entitlements play a significant role for people's income. Figure 3 reports how the sum total of entitlements, about half of which is Social Security, Medicare and Medicaid, is distributed across the income groups. For example, of the $2.7 trillion in entitlements paid out in 2016, the fourth decile got 14.2 percent of all the money. Total personal income shares are thrown in for comparison: 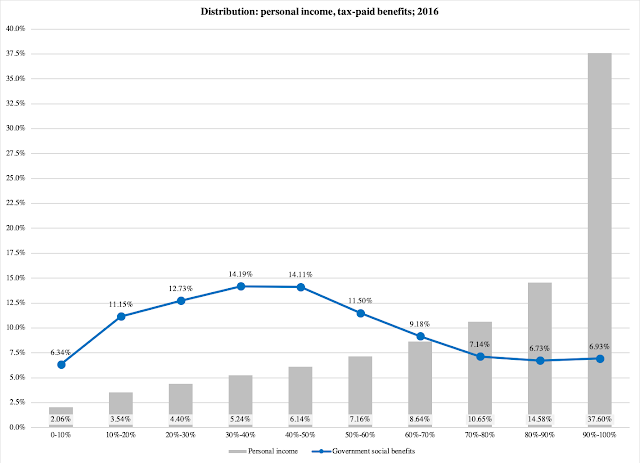 In other words, our welfare state is fairly good at redistributing income and consumption.

We would get an even more compelling image of the redistribution pattern if we could add personal income taxes to the picture. However, the BEA has not yet converted their personal-income data into disposable income. It is well established, though, that the top-20 percent of income earners pay two thirds of all federal taxes, and 80 percent of all personal federal income taxes. In other words, the tax system faithfully pulls its load of economic redistribution.

There is more information in the BEA economic redistribution database, but that will have to wait to a later article. For now, these numbers suggest that we already have a working redistribution system in place, that income differences are stable over time and therefore there is no need for yet more redistribution programs.
at March 09, 2020