Can Endless Deficits Cause a Bank Crisis?

Conventional wisdom says low interest rates are good for the economy. But are they really?


There are problems related to our budget deficit that are not often brought up in the public arena. On Sunday I explained the relationship between the deficit and the problems with under-performing asset portfolios in our banking industry. Our commercial banks are saturated with government debt that, thanks to very low interest rates, produce only minor streams of revenue. We are on the brink of negative yield for short-term debt, and yields on ten-year Treasurys are now below one percent.

Understandably, the appetite for more government debt is shrinking.

Conventional macroeconomic wisdom says that low interest rates are good for the economy. Businesses are more likely to invest, and borrowing costs for government are lower. However, the relationship between interest rates and business capital formation is often exaggerated in the economics textbooks. The prospect of profitability from a new investment is far more important, and only partly affected by the cost of credit.

The point about government borrowing costs is more relevant, especially with as big a debt as our federal government has. However, as my Sunday article explained, there is a big flip side to cheap borrowing costs for government: those who buy Treasurys make very little money.

For commercial banks, who in the aggregate keep almost 22 percent of their asset portfolios in Treasurys, the low yields spill over on another, larger group of assets. In their March 14-15 Print edition (p. B13), the Wall Street Journal explains that banks are souring on mortgage assets. The immediate reason is increased uncertainty in the financial system related to current public-health concerns, but the profits on mortgage loans have been shrinking steadily for some time now. The reason,  of course, is the steady decline in interest rates, as exemplified by these numbers from real-estate website Zillow (with green representing 30yr fixed, blue being 15yr fixed and purple representing 5/1 ARM):

These rates have made it harder for banks to earn money on mortgages. On the flip side, home owners have been able to refinance at low rates, a factor contributing to better household finances. This in turn has led to household savings rates rising and debt burdens falling.

It is worth noting that the low rates are not all bad for the banks. As a related bonus, household credit delinquencies have plummeted across the board. In the fourth quarter of 2019 the rate of delinquencies and charge-offs was:

The delinquency rate is even more impressive for commercial real-estate loans. At 0.66 percent in the fourth quarter of 2019 it was the lowest since the Federal Reserve began reporting on it in 1991.

The strength of household and business finances is the result of President Trump's hard work, with good support from Republicans in Congress, to put our economy back where it belongs: on a steady path of growth and full employment. However, this job has only begun: there are numerous structural problems for us to solve, one being the fledgling - even declining - profitability of traditional banking.

Generally speaking, the financial industry is profitable. A superficial look suggests that net-tax profits as a share of the value added by industry is comparatively high. In 2018 finance and insurance ranked as the second most profitable industry in the U.S. economy:

However, one-year profit numbers are not everything. The long-term trend for the financial industry is in decline: in 2012 the profit-to-value-added ratio was 21.9 percent, and 20.2 percent in 2014. Furthermore, we should keep in mind that this is an aggregate number that does not reflect commercial banks specifically. It is very likely that other parts of the financial industry inflate the profit margin above what consumer-oriented banks can make.

In fact, it is quite possible that commercial banks are far below the industry average. As I explained on Sunday, low-paying Treasurys, both mortgage-backed (MBS) and traditional, account for almost 22 percent of total assets in bank portfolios. The real-estate loan market accounts for a sizable share of their assets. Figure 1 reports them with Treasury MBS's included: 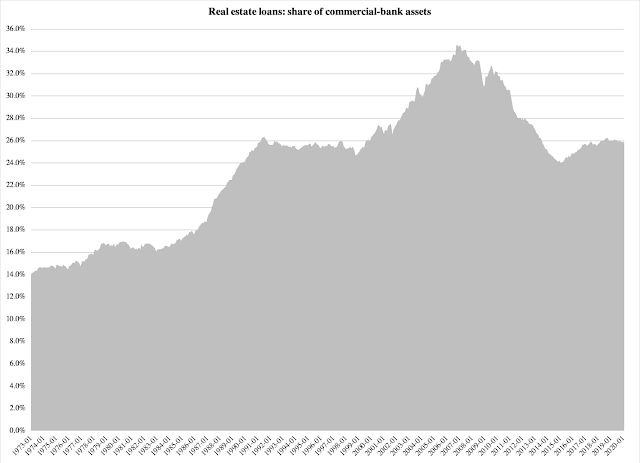 The decline in the share is not due to some recent reduction in the stock of real-estate loans. The real-estate loan volume did decline by 9.3 percent from the summer of 2009 - when the pre-crisis loan volume peaked - to the summer of 2011, when mortgage lending began increasing again. Since then, though, the total volume of loans has gone up by more than 32 percent.

If we add non-MBS Treasurys, the total low-yield share is almost one third of total assets. Given the long-term outlook on the federal budget deficit, the outlook on bank margins is bleak. If Congress does nothing to reduce the deficit, the imbalance between the federal government's need to borrow and the willingness of the debt market to take on more, will only be exacerbated. Figure 3 reports the ratio of the deficit to federal spending as predicted by the CBO - and by the OMB: 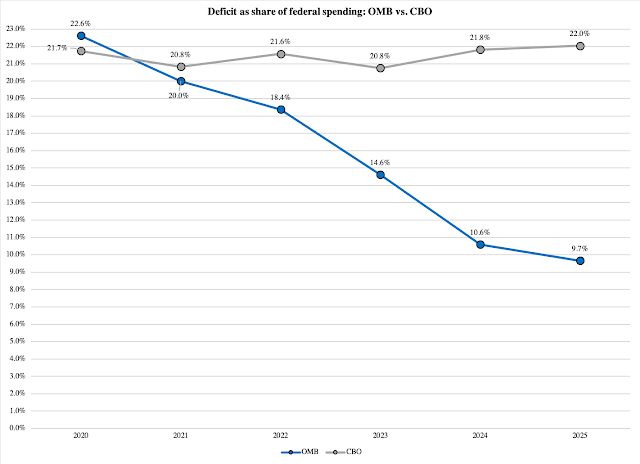 The CBO outlook predicts that a high and rising share of total federal-government outlays will be funded with deficits. By 2040, they predict, 31.4 percent of federal spending will be financed through borrowed money.

I have never been a friend of long-term forecasting. Sometimes you have to do it, and if it is done under prudent circumstances - and preferably without the involvement of econometricians - you can actually get some intelligent outlooks done. However, not even the best forecast can predict anything in the economy over a 20-year horizon. Therefore, the CBO outlook should be consumed with a grain of salt.

For two reasons, the OMB forecast is better. The first is its short horizon: it only looks five years into the future. The second reason is that it is based on President Trump's budget for FY2021. Anyone interested in reducing the budget deficit should get behind this budget: its gradual reduction of the deficit is absolutely essential to keep the debt markets in good health.

It is here that we circle back to the banks. To bring their profits up they want to load off some of their sovereign-debt assets. With the federal government gradually reducing the deficit, the market for U.S. debt will strike a better, more long-term sustainable balance between supply and demand. This will lead to an increase in the price of Treasurys without artificial intervention by the Federal Reserve. As the price goes up, the interest rate falls.

If, on the other hand, Congress refuses to work with the president on the deficit, our future will follow a track much closer to the CBO forecast.  If the Treasury just kept on pumping out more bills, notes and bonds on the debt market, the price would eventually plummet. Interest rates would spike, with all kinds of disruptive effects on the economy. To prevent those effects from throwing our economy into a deep recession, the Federal Reserve would have to reopen its Bernanke-era Quantitative Easing program.

Printing more money is not a good option. As I have explained in previous articles, monetary policy has lost its power. Yet without the Trump 2021 budget that is where we will end up. By consequence, this will keep the pressure on our banks and - in the next recession - potentially bring about a new bank crisis.

Plain and simple: we have some deep structural problems in our economy that we must deal with in a systematic, and systemic fashion. We already have an adult in the White House; it is time for the adults to run Capitol Hill as well.
at March 17, 2020