Despite all the efforts by President Trump, our federal government is still running a big, fat deficit. We need to close that gap, if for no other reason that government should be better prepared in the future to deal with adverse shocks, like a virus epidemic.

In the wake of the corona-virus frenzy, the Trump administration has unleashed yet another wave of deficit-funded federal spending. I am not criticizing the spending itself: we have the health system we have, and the role of government in these situations is what it is. Given present circumstances the Trump administration is doing what it could be expected to do. The problem is instead how the budget deficit limits the room the president has for action.

The question is not if President Trump will lead America through this crisis. He will, with flying colors at that. The question is what room the president will have when the next major crisis hits. It is already getting difficult to put more government debt out on a sovereign-debt market already saturated with Treasurys. Historic overspending by half a century of presidents and Congressional majorities is slowly coming home to roost.

The situation is highlighted in a Wall Street Journal story about the Federal Reserve and its latest liquidity supply to the banking system. While the article itself is not directly about Treasury debt saturation, the problem is mentioned in the passing (March 14-15 Print Ed., p. B13):

Funding strains in the banking system worsened slightly Friday despite the New York Federal Reserve's offer to inject $1.5 trillion of extra short-term funding. the strains suggest the Fed's promised injection of central-bank money, announced Thursday, hasn't fully solved the banking system's issues. Some analysts and investors think a return to a full quantitative easing - or bond-buying - program will be needed to calm funding markets that lie at the center of the world's financial infrastructure.

The banks only used about eight percent of the new line of central-bank credit. But why would their hesitation be eased by the Federal Reserve returning to QE?

Here is why. The Journal again:

The low takeup may indicate that only a few banks are really in need of ash, according to bankers and analysts. It also suggests that the problems might not be so simple as a shortage of central-bank reserves. ... The underlying problem, say some investors, is that banks are holding too many Treasurys and don't want any more.

If the Federal Reserve went back to QE, banks could offload their federal debt onto the central bank. This would reduce the share of their portfolios that makes very little money and free up cash they could use to acquire higher-yielding assets.

To get an idea of how big this problem is, Figure 1 reports the total amount of Treasury debt owned by commercial banks. Mortgage-backed Treasury securities (MBS) are added to non-MBS Treasurys for a total of 21.8 percent of bank assets (as of February 2020): 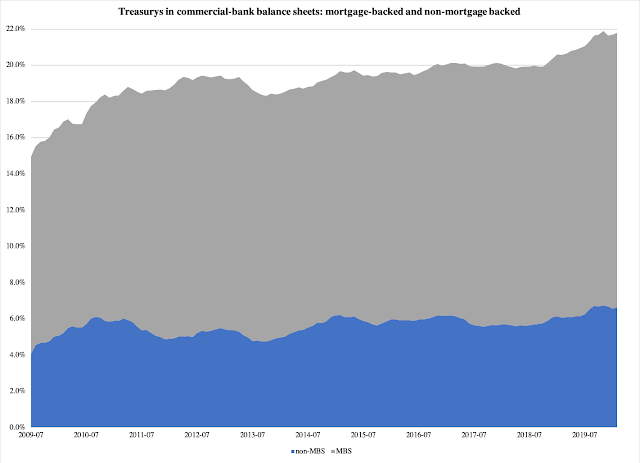 The low-yield problem is isolated to the non-MBS part of Treasurys, but the MBS share is relevant since it illustrates the whole impact that government debt has on bank portfolios.

According to the Federal Reserve (Table H.8 in their Bank Assets and Liabilities database), in February 2020 commercial banks owned $2.1 trillion worth of MBS and $923 billion of the general kind of Treasurys. In July 2009, the earliest datapoint reported, these two government-debt types added up to 15 percent of bank assets, a significantly lower share than today's almost 22 percent.

The problem for the banks is that they cannot retire the debt by selling it back to the Treasury. For that to happen, the Treasury would need to buy back its own debt - in other words run a budget surplus. Instead, if banks want to reduce their balances of low-paying assets they need to find a taker. This may not be easy, given that ten of the 12 maturity categories of Treasurys now yields below one percent:

It is, by the way, remarkable to see the plunge in yields on Treasury bills (maturity date one year or less), from the unweighted average yield of 1.13 percent at the start of this month to just over 0.33 percent by mid-month. The fall in yield on notes (2-10 years) has not been as dramatic, but it has nevertheless happened, putting both the bills and the notes below one percent.

It is only a matter of time before the U.S. Treasury dips its toes into negative-yield territory. That would be a sad day; Europe is there already, with depressing results for most of the continent - but not all - in terms of GDP growth. Their highly irresponsible depression of sovereign-debt yield as amounted to nothing in terms of economic stimulus.

The descent into negative yield could happen simply by the volition of chronic deficit spending. If Congress passed President Trump's 2021 budget the risk of that happening would be noticeably lower, and eventually go away altogether. Barring that, negative yields are only a matter of time. What is worse, though, is that once we get there it will be virtually impossible for the Treasury to issue large amounts of debt for catastrophic purposes; only the Federal Reserve would remain as a reliable buyer - provided, of course, that it opens another Quantitative Easing program.

In plain English, a QE program is nothing more sophisticated than a large money-printing scheme. It is entirely unsustainable for a nation to rely on money printing to fund regular government spending; it is verging on the unsustainable to do so for contingency purposes. If the federal government operated a balanced budget today, it could tap into the regular sovereign-debt market for extraordinary situations. If, e.g., commercial banks did not sit on large piles of Treasurys already today, they would have no problem taking on a balance of government debt under unusual circumstances.

There are plenty of reasons for our government to balance its budget (and to do so without raising taxes). Among them, the contingency response reason may not be as attractive as driving your grandpa's '65 Mustang to the prom, but it is one that should rank right at the top of the reasons why Congress should double down on reducing its deficit.
at March 15, 2020