Beware of these tax-grabbing three bills, which are still alive and kicking in the legislature. Be especially aware of HB186.


The corporate income tax has gone to be with its ancestors (the gross receipts tax, last year's "tourist" industry income tax) but the tax hikers still have an ace up their sleeve. Or, three aces, to be exact:

HB47, which would transfer more jurisdiction over local sales taxes from voters to government, effectively making the fifth penny permanent;
HB134, the lodging tax, marketed as an advertising fee but predictably morphed into a source for General Revenue; and
HB186, a bill to permanently raise your sales tax and turn the Legislative Stabilization Reserve Account, LSRA, into a conduit for more government spending.

The first two bills have made it out of the House and been received by the Senate for introduction. I have no direct information on the deliberations in the Senate, but a hunch tells me that the lodging tax faces stiff resistance. I am more worried at this point that HB47 is going to make it - and if it does, there is a clear risk that HB186 follows in its footsteps.

The HB186 is a sneaky tax hike. It did not come out of the Revenue Committee, but from Appropriations, and it is also late in the cycle: while it was introduced on February 13 and referred back to Appropriations, it was not placed on House General File until the 18th.

Given the nature of the bill, I would not be surprised if the House will wait as long as possible with shipping it over to the Senate. The bill, namely, is constructed to increase sales and use taxes and automatically funnel that revenue to local governments (according to a technically detailed formula).

Instead of coming out in the open and declaring "we are going to raise your sales tax", with HB186 the House majority has instead chosen to turn the Legislative Stabilization Reserve Account into an instrument for automatic appropriations. Yes: this bill would put more local-government spending on auto pilot, beyond the discretionary deliberations of the legislative process.

Essentially, the auto-pilot function works as follows (the technical intricacies of the bill notwithstanding). Whenever LSRA reaches a balance of $1.75 billion, the money is distributed to local governments; when the balance is drawn down to $500 million the state sales and use tax automatically goes up to five percent until the balance again reaches $1.75 billion. In theory, at that point the tax will then fall again to four percent: 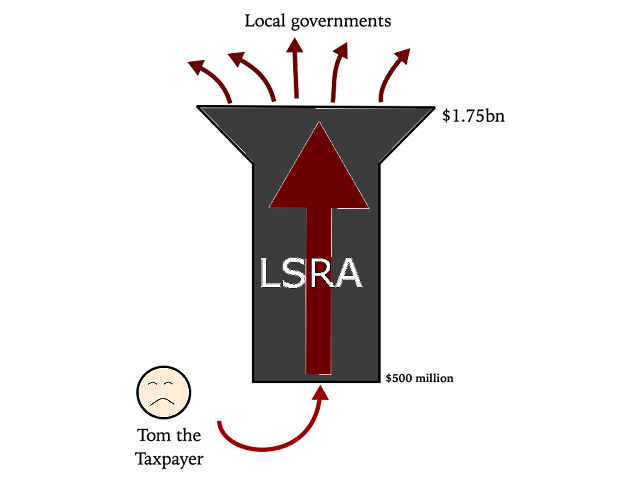 In practice, the tax will never fall back again, and the reason is simple. Once this auto-pilot function is in place, the benefitting local governments will spend the money at lightning speed. There simply will not be enough time for taxpayers to replenish the LSRA to where the tax can go down again.

This bill is an excellent example of what I discussed yesterday, namely how we push more and more of our government spending away from the General Fund process and onto auto-pilot measures. We run half of our state spending through Other Funds, a share that is twice as high as the national average. Mechanisms like HB186 only reinforce this trend.

There are many problems with putting government appropriations on auto pilot, but the two biggest ones are:

1. Perennial growth in the cost of government.

Auto-pilot funding serves the purpose of insulating government spending against the ups and downs of the business cycle in the private sector. The main idea, of course, is to make government immune to recessions, something that is demonstrated very well in HB186.

Suppose government spends $100 per year, and taxpayers provide $100 to exactly match appropriations. Suppose now that a recession kicks in and tax revenue declines along with shrinking business and consumer spending. Taxpayers now only provide $80, leaving a deficit of $20. The balance in the LSRA account now dwindles, to the point where, according to the LSRA auto pilot proposed in HB186, the sales tax goes up.

Government now grabs $100 again, but out of a smaller economy. The consequence, of course, is that even less money is spent in the tax-paying sector, further depressing the tax base. This, however, is a part of the story that the Appropriations Committee, in its infinite wisdom, has not considered.

2. Increase in the democratic deficit.

Suppose government spends $100 per year and funds every dime of it with taxes. Suppose that those taxes are voted on anew at every annual legislative session, so that the people's elected representatives can fully control every dime's worth of government finances. This is a case of democratic balance.

Suppose instead that government still spends $100 per year but decides to create an automatic funding mechanism for $10. The legislature no longer has jurisdiction over those $10, which are taken from taxpayers under a permanent statute. If the legislature wants to change the tax or how the money is spent, it will now have to go through the onerous process of rewriting the law itself.

We now have a democratic deficit proportionate to the auto-pilot funded share of government spending.

It is worth noting that HB47, the bill to water down voter influence over the local sales-tax penny, goes in the same direction as HB186. This tendency is troubling in its small steps but frankly disturbing in the aggregate. By shielding its spending from recessions, government tries to make itself independent of the free-market economy; by shielding its spending from democratic influence, government effectively shields itself from its voters.

I am not in the business of telling legislators how to vote. I can only stress that we need a government here in Wyoming that is more, not less, fiscally sustainable, and more, not less, accountable to taxpayers and voters.
at February 24, 2020