State of the State: A Hint of Fiscal Conservatism

Governor Mark Gordon could be the fiscal conservative we have been waiting for.


Governor Mark Gordon has now been in office for a bit more than a year, and he has submitted his first budget to the legislature. We are going to look at the details of it later, but the broad strokes were given away in the governor's State of the State speech.

It is always good to be cautious about a new governor's first year in office; we all remember how Matt Mead came out swinging the fiscally conservative bat but quickly put it away again, bringing it out for show-and-tell during his re-election bid.

That said, Governor Gordon may actually still prove to be a fiscal conservative. His State of the State speech was not spectacular, but it did give away two important policy points that suggest there is more to come from his office in terms of fiscal conservatism.

Today, I am proud to report that Wyoming's economy and the state is strong. More people are finding a better future in our state. Our population has grown. Unemployment is down and is at the lowest rate since 2008; gross domestic product is increasing; and personal income is up.

I like Governor Gordon. He is not a pretentious politician, but serious about doing a good job. He cares more about the office he holds than about his own career, and that is worth a lot in today's politics.

Having said that, I also wish the good governor would pay as much attention to our state's economy as he does to the rest of his job. His claims about our state's population, unemployment, GDP and personal income are all somewhere between creative and wrong.

Again: this matters. The variables he refers to are among the key indicators of where our state economy is heading. It is based on variables like these that our legislators, and our governor, will decide whether to spend more or less, and whether to raise or cut taxes. An accurate picture of our economy is highly consequential to the very future of our state.

On the first account, the good governor is wrong. Our population is actually shrinking. The American Fact Finder database over at the Census Bureau reports annual state population estimates since 2010. Here are the Wyoming numbers:

We can get a more detailed account from the Bureau of Economic Analysis. They publish their own state population numbers as part of their per-capita personal income estimates. Here is the trend they report: 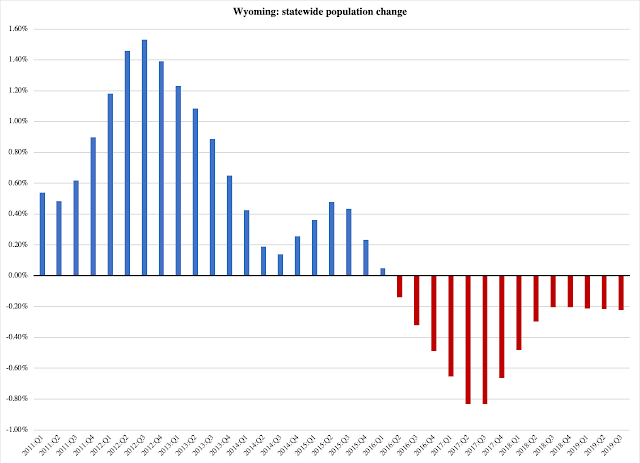 As for the unemployment rate, the governor is a bit closer to facts. Measured in seasonally adjusted numbers, unemployment is down... 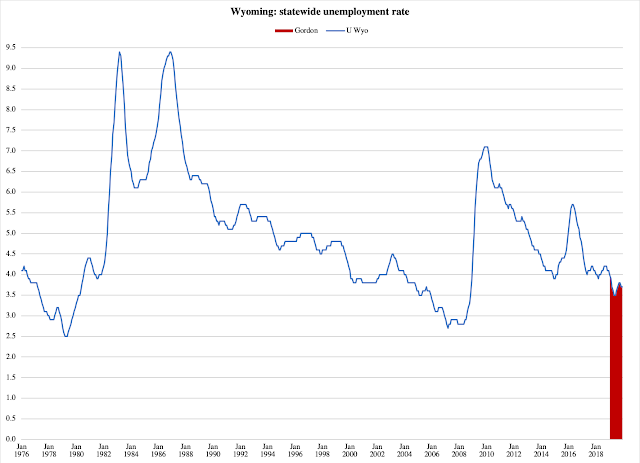 ...but only if we use a carefully selected starting point. when Governor Gordon took office a bit over a year ago, statewide unemployment was 4.0 percent. The preliminary number for December 2019 is 3.7 percent, so if Gordon is referring to his own tenure he is correct.

However, it is not too hard to push the unemployment rate down in a state that is losing population. It is not primarily the people who still have jobs that are leaving Wyoming.

The governor's comment about the state GDP is a little bit murky. Strictly arithmetically, yes, GDP is growing, but that is almost as trivial as to say that there are babies born in Wyoming. If Mark Gordon referred to current-price GDP, then he is up against the very boundary of truth: in the fourth quarter of 2018 current-price GDP increased by 3.7 percent on an annual basis; since then it has declined and was only 0.3 percent in Q3 of last year (the latest for which we have numbers).

Current-price GDP data is important if we want to know what is happening to the tax base. If we want to assess the inherent strength of the economy, we look at inflation-adjusted GDP. Here, Governor Gordon is on a bit more firm ground, with more than three percent annual growth for all the three quarters of 2019 with data available.

That said, based on the employment numbers I have reported on elsewhere, I would not be surprised if the fourth-quarter numbers for last year come in well below the previous three quarters. Furthermore, if we look back to 2008, a year the governor refers to but not in reference to GDP, we have lost six percent of our GDP in fixed prices, and an astounding 11 percent in current prices.

This means, in plain English, that our tax base is only 89 cents to the dollar today compared to where it was in 2008, right before the Great Recession broke out in full force.

Personal income, the last variable Gordon mentioned, is up since he took office. However, of the increase we have seen since then, more than 41 percent of the increase in net earnings, comes from increases in transfers - tax-paid entitlements - received by households. Since transfers only account for 25 percent of net earnings (14 percent before taxes) this means that personal income has received a disproportionate boost from government handouts.

We have, plainly, become more dependent on government under Governor Gordon's first year in office.

I don't blame the governor for this increase. He has had very little say in where the economy has been going in the past year, so he deserves no criticism for this. That said, though, he also should not take credit for the increase in GDP...

While we are on the fact-checking streak, the governor also claimed:

It may come as something of a surprise, but state government is actually smaller now than it was a decade ago. There are fewer state employees who are being asked to do more with less.

He is actually right. In November of 2019, the last month for which we have definitive Bureau of Labor Statistics data, there were 14,600 state employees, down from 15,500 in the same month in 2009. Almost the entire reduction has taken place on Gordon's watch; when he was elected the state workforce was almost exactly the same as in 2009.

It is good that the governor has led a downsizing of the state workforce. It would be nice, though, if he could also acknowledge the strife and struggle in the tax-paying sector of the economy. We still have the nation's highest Government Employment Ratio.

The governor also noted that the state government is losing some of its skilled, productive, and knowledgeable employees

because we do not pay competitively. On top of that, we should remember that we had to increase both employee health insurance and retirement contributions, which effectively reduced their take-home pay.

Yes, that sucks. But could the governor also please recognize the burden that these benefits put on the shoulders of private-sector employers around the state? How many people working in the private sector even have access to health insurance under the heavy costs of Obamacare? How many private employers are forced to keep their employees below 30 hours per week to avoid having to take on the cost of health insurance, made unsustainable by the "Affordable" Care Act?

On this point, Governor Gordon needs to step up and break with tradition: where his predecessor only talked about state government in reference to our state's economy, this governor has a great opportunity to show that he knows what is happening on the ground with trucking companies, landscapers, manufacturers, retail businesses and private health-care providers around the state.

Which brings us to the two policy points that signal more fiscal conservatism coming from Governor Gordon. It is not as clear a signal as we would like to see, but it is there, starting with this comment:

We have savings. This means we have time, not a lot of time, but time to make thoughtful decisions about our future and our budget.

What decisions is Gordon talking about? We don't get any specifics, but then he went on to explain:

My budget charts a fiscally stable path. It keeps ongoing spending flat, giving our state time to think about the services we need to provide, and what we can do without. This budget took the advice of the Legislature and funded education in an undiminished capacity. In doing so, we will have to spend from our savings. The valve on education funding is stuck open and it will up to this body as to whether that plumbing will hold up over time.

This is actually interesting. I hear two policy statements here:

2. The "valve" comment suggests that Gordon is not happy with the cost of our K-12 system. He simply cannot go to the state police, our prison system, WYDOT and other parts of the state government and ask for reductions in spending, while showering the school system with cash. No doubt, Gordon wants the legislature to do something long term, something structurally sound, on this front.

The first point is promising. It suggests that Governor Gordon may be open to comprehensive structural reforms to state spending. At the same time, his misunderstanding of the precarious state of our state's economy - losing jobs and paychecks like no other state - may weaken his determination and his desire to go far enough.

If he is serious about long-term cost reductions in K-12 education, he will need to get behind a comprehensive school-choice reform. It will take time for supporters of school choice to weed through the legal challenges; to get to the point where school choice is beginning to have a fiscal impact, we probably need four years of legislative and legal work. Therefore, if Governor Gordon wants to lead a structural reform campaign with school choice, he needs to get started on it yesterday.

Again: this is promising. It sounds like if the legislature shifts in a more fiscally conservative direction come November, there would be little resistance to good reforms from this governor.
at February 11, 2020