Forget everything you have heard about our government being cut to bare bones. The state of Wyoming keeps spending more. And more.


There is a new momentum emerging. A TABOR momentum.

In Colorado, the TABOR origin, there is a fight to keep the measure, a fight that ATR Vice President of State Affairs Patrick Gleason covered in a good Forbes piece last summer. Gleason has also chronicled similar measures in other states, from Massachusetts to Oregon, pointing to how they have successfully combined spending restraint with taxpayer refunds.

There is apparently a TABOR bill brewing in Pennsylvania, to which we will have to return later. For now, let us listen to Paul Gessing, president of the Rio Grande Foundation in New Mexico. He testified just this week:

HJR 5 is a New Mexico version of Colorado’s tax and spending limit. It is more lenient in that it limits state spending to a combined rate of the percent increase in population growth + 3.6%. Furthermore it imposes a 3/5ths legislative majority requirement for the Legislature to keep revenues above that amount or raise taxes. Finally, surplus revenues above the limit would be split 50/50 between rebates to average New Mexicans and public education. Based on calculations from the Rio Grande Foundation, if Rep. Montoya’s bill had been in place upon the departure of Gov. Susana Martinez in 2018, the citizens of our State and the public education system would have split over $1 billion in rebates or approximately $260 for each man/woman/child from the State over the past two years. That’s $260 returned to the hard-working citizens and taxpayers of New Mexico to invest for their own futures or put a down payment on everything from a new business venture to a new car. Of course, the education system would be in line to see additional funding to the tune of at least $500 million as well.

Indeed. Let us keep in mind that the New Mexico TABOR would be less restrictive than the Colorado original - and it would still generate this kind of return to its constituents.

Interest is growing across the country in statutory or constitutional measures to put a leash on government spending. Obviously, TABOR is one good idea; longer term, we need structural downsizing like the seven reform ideas I put forward in December. However, it is also essential that we integrate shorter-term reforms as a beginning; longer-term reforms are essential, but they take time - often several years - to even get started on.

A TABOR reform is a bit more immediate, but we can also do a lot of good with more technical, yet very effective reforms. Back in 2011, Jonathan Williams, Executive Vice President and Chief Economist at ALEC, published a great little toolkit for state fiscal reform. Many of his ideas are exactly in line with what I have been proposing, such as concentrating on the core functions of government and replacing baseline budgeting with priority-based appropriations.

We will look more closely at the ALEC toolkit in coming articles; for now, let us again distinguish between:

a) Quick reforms that immediately rein in spending and put a leash on its growth; and
b) Longer-term, structural reforms that permanently end government growth.

A TABOR-style reform bill actually overlaps these two categories, which makes it particularly attractive as a legislative instrument. As Patrick Gleason explains, there are several different versions of TABOR-style reforms that states can pick and choose from.

The TABOR bill we now have on file here in Wyoming is actually the best one I have seen so far. I will examine it in detail on Monday; for now, let us note that we need it badly. According to the latest state spending data from the National Association of State Budget Officers, the Wyoming state government continues to be one of the most prolific spenders in the country.

Before we get to the state specifics, here are the aggregate, annual numbers (in current prices) for all the 50 states, from General Fund spending through Federal Funds to Other Funds: 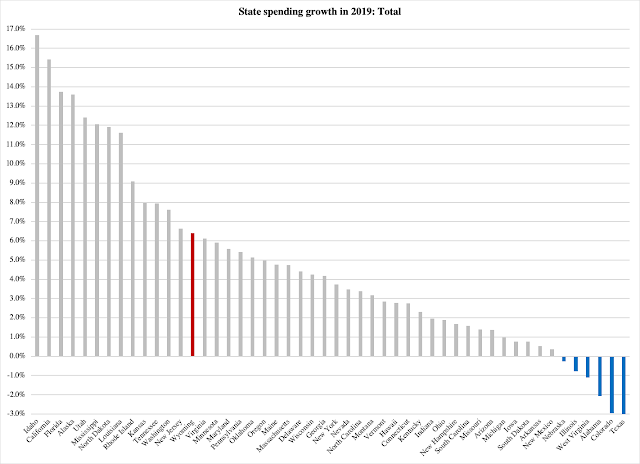 As Table 1 reports, in the aggregate General Fund spending did not increase quite as much as total spending. However, 14 states still managed to expand their General Funds by more than six percent; with 8.7 percent Wyoming ranked 7th in the nation: 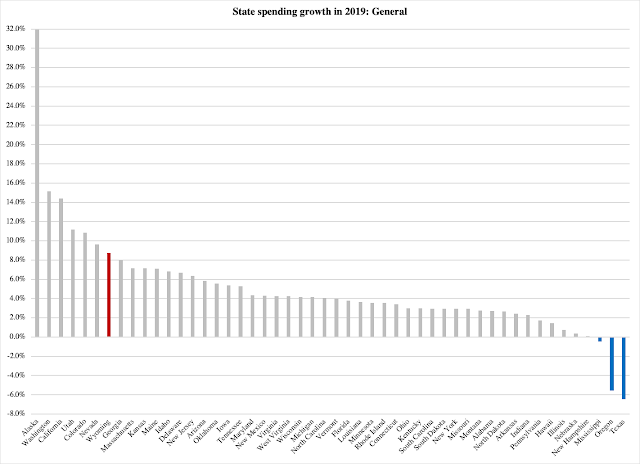 Again going back to Table 1, there has been an acceleration in the growth of federal funds going into state budgets. For 2019, a total of 19 states expanded their receipt of federal money by more than six percent. Here, Wyoming actually placed at the far end of the spectrum: 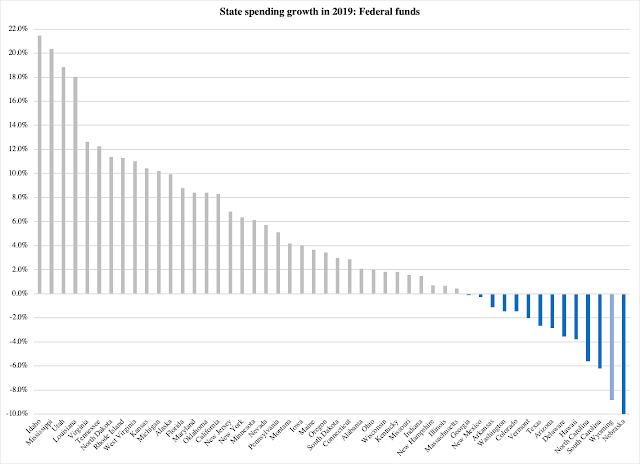 Last but not least, Other Funds. This is where a good chunk of government spending goes unnoticed, often falling outside of the public debate over government spending. Yet in 2019 the largest increase, by far, in state spending happened in the Other Funds category, with 15 states growing their Other Funds spending by more than ten percent. Wyoming making the top-ten list at 11.5 percent: 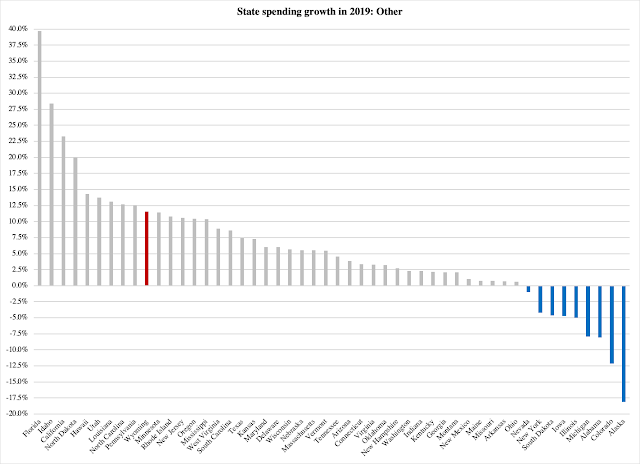 Nationally, only 26.5 percent of all state spending is routed through Other Funds. In Wyoming, however, it amounts to just over half.