A Note on Excess Government Compensation

One of the problems with big government is that it slows down the growth in the very tax base that pays for that same big governments. Here is an example of how this "boomerang" effect works.


The legislature has now spent a week with Governor Gordon's budget. We will take a close look at it in a day or two; for now, here is a statistical note on why it is essential to reduce the size of government.

As I have reported on many occasions, Wyoming has the nation's largest government workforce - our Government Employment Ratio is the highest of all 50 states - and the reason is not that we are a rural state. It is entirely of our own doing: we have a big workforce because we ask government to do things for us that could be done better by the private sector.

Analytically, it is not difficult to nail down what we need to do to shrink government; the problem is on the political side where the will to execute the right kind of reforms is still too weak. While a large segment of our legislature keeps resisting reform, many of them are also aware that our economy is not growing very well. Their concerns, however, are motivated more by the lack of tax revenue than by anything else.

It is true, though, that a large government sector is related to slow economic growth. Government stifles growth in four ways: by imposing costly taxes, fees and charges that drain the private sector of money; by piling up costly regulations in the way of businesses and families going about their lives; by discouraging entrepreneurship and career development through economic redistribution; and by draining the workforce in local communities by means of tax-paid jobs.

The last point is often under-estimated. Government is not open to competition; regardless what we hear about how government cannot keep talent because it can't pay enough, the fact of the matter is that those are rare exceptions in highly specialized areas. A large majority of the roughly 60,000 state and local government employees in Wyoming are not exposed to private competition. The reason is either that there basically are no private employers (teachers) or that government artificially - by virtue of tax funding - can offer so much better employment conditions that private-sector employers do not stand a chance.

It is, in fact, easy to demonstrate that government employees in general are overpaid and thereby to show why the private sector is a better source of economic growth. We measure the value of the economic contribution of an industry by its share of our GDP. For example, in 2018 the 9,600 private-sector employees in Uinta County produced a total economic value of $$776.9 million, or $80,937 per employee. That same year, the 2,258 government employees in that same county produced $150,6 million in economic value, for an average of $66,704.

In other words, in Uinta the contribution from the average government employee was 82 cents to the dollar in the private sector.

In some counties government workers contribute more, on average, to the economy than private-sector workers do. There is a specific reason for this that we will get back to in a moment; first, let Figure 1 compare the pay difference (blue line) with the value difference (grey). In every single county, the difference in pay vastly exceeds the difference in value contribution: 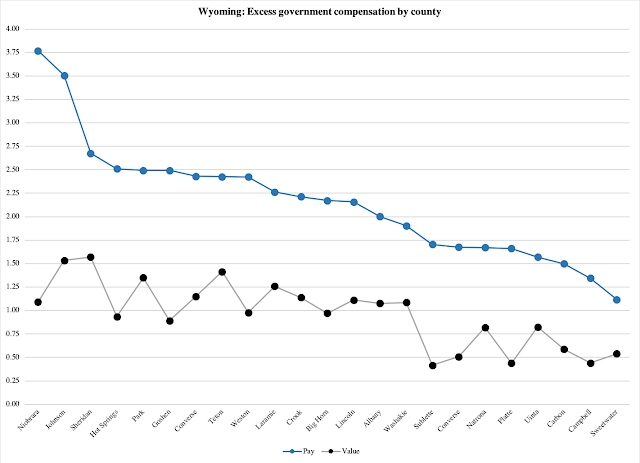 That said, the over-payment problem in these eleven counties is not as bad as it is in counties where government workers contribute less to the economy than private-sector workers do. Figure 2 reports the value disparity from Figure 1 (grey) and the ratio between pay and value disparities (red). The higher the ratio is (red), the more over-paid are government workers: 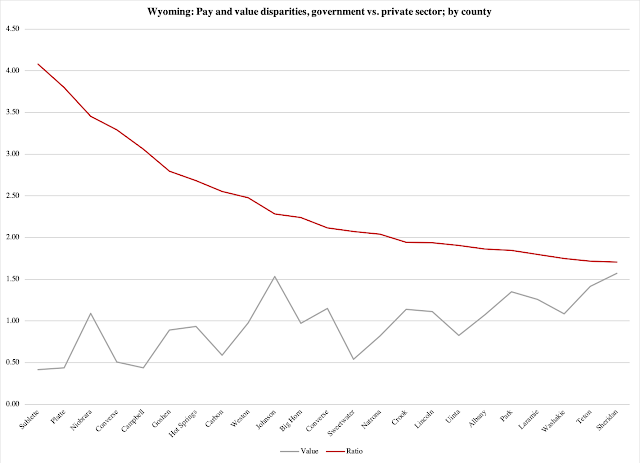 Since government does not compensate their workers based on market rates, economic growth is weaker when government is big. Excess compensation means, so to speak, that economic value is lost; think of it as heating your house with the windows open. That is not to say that government jobs don't add value - they do - but the lack of a market mechanism for matching pay with value leads to more "hot air" being lost as government grows.

Wyoming is in desperate need of better paying private-sector jobs. Those jobs do not come from government subsidies, tax breaks and other forms of corporate welfare. They come from deregulation, lower and - yes - predictable taxes, and a small, efficient and non-invasive government sector. With a larger private sector and a smaller government, we will produce more economic value and thereby a broader tax base. With that tax base we can sustainably fund the small government we need, starting with the essentials: law enforcement, fire and rescue and infrastructure.
at February 22, 2020