Contrary to the doomsday prophecies in the wake of Trump's trade talks with China, the U.S. economy has not entered a recession. After a softer period - a breather - in Q1 of this year we are likely to get back to growth again.


In November I reported that the Trump economic boom is ending, but that it will not be followed by a recession. I explained that the U.S. economy was taking a breather, but that it

will not escalate into a recession if Christmas shopping is strong and if U.S. manufacturers show resiliency in the fourth quarter. If consumer spending loses pace this Christmas, it is unlikely that manufacturers will keep hiring and get back to investing. Therefore, a disappointing holiday shopping season will tell us that it is time to upgrade the "breather" forecast to a recession forecast.

We now have GDP numbers for the fourth quarter, and my prediction of a breather remains in place. In total, in the fourth quarter of 2019 the U.S. economy expanded by 2.32 percent. This is up from the third quarter when the annual rate was 2.07 percent, and it is the highest number since Q1:

If we had been entering a recession, the fourth-quarter number would have been below Q3, extending a trend of overall weakening economic activity. That did not happen, confirming my prediction of a breather instead of a recession.

Many critics of Trump's so-called trade war with China made all kinds of abysmal forecasts of how it would throw us into the hole. I have maintained all along that this is not going to happen, in part because foreign trade is not all that important to the U.S. economy. While many European economies depend on exports for 40-60 percent of aggregate demand, exports is less than 12 percent of our total GDP.

That said, as the "trade war" is tapering off we can expect a boost in U.S. exports that will add to the limited but positive impact that foreign trade has on the U.S. economy.

Looking in more detail at the components of GDP, we see more reasons to believe that this is not a recession in the making. All is not good, but first three pieces of positive news:

1. Private consumption continues to grow faster than GDP. This is always healthy, as it means that households are overall doing relatively well. Many European countries with reasonable growth rates rely much more heavily on investments and exports than on private consumption, often with a connection from exports to investments. As a result, those economies have no resiliency over time: currency turbulence or a recession in some key export market will quickly translate into a recession at home. The domestic orientation of our economy makes it more stable over time, helping to explain why we are not yet in a recession. In fact, consumer spending remained remarkably stable throughout 2019.

2. Spending on goods, specifically, increased strongly throughout 2019. This has been good for manufacturing, as we will see below. There is a positive companion to this variable in Table 2 below, namely residential construction.

3. Exports grew marginally for the second quarter in a row, with imports actually declining. This improves the trade balance, and how Trump is putting better trade deals in place we are likely to see more of this going forward.

Those are three good points. With reference to the good news about consumer spending, the manufacturing industry - a quantitatively limited but qualitatively good indicator of our economic strength - remains strong. Figure 1 reports its employment numbers, month by month, over the past eleven years, starting with the Great Recession: 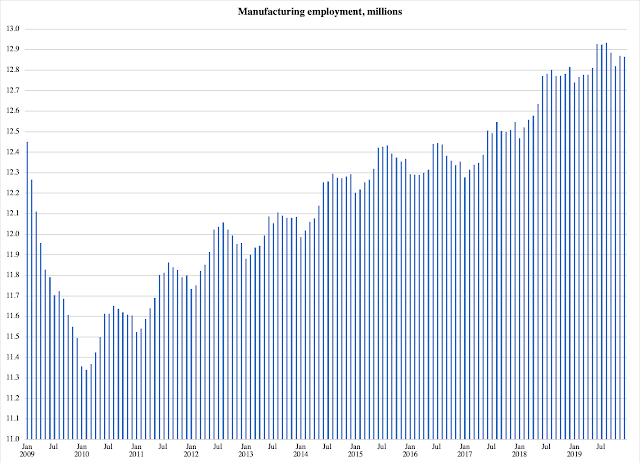 Since Trump took office the economy has added about half a million manufacturing jobs. This is a good record, but going forward we should not expect the same strong trend, at least not for the first quarter of this year. The reason is in business investments - here is a breakdown of the GFCF (gross fixed capital formation) variable from Table 1:

Almost every category is negative. The most important indicator here, structural investments, is down for the third quarter in a row. This means, plainly, that U.S. businesses are investing less and less in manufacturing facilities, warehouses, garages, logistics centers, offices and other structures they need to do business.

Some consider this decline to be an almost certain sign of a recession. That is not the case. When businesses expand their structural capacity - the square footage on which they produce their goods and services - they reach a point where their capacity is adequate for what they need. That does not mean they are going to reduce the production that takes place on that square footage; once they have reached that point they hum along with what they have.

Another indicator that businesses have reached capacity is the investment in equipment. This one has continued to increase after the structural-investment category went negative. Again, there is a perfectly logical explanation: first you build factories, offices and other structures, then you fill them up with all the equipment you need in order to produce. Once you have set up your structural and equipment capacity where you need it to be, you go about your business.

Residential investments - home construction - has been in decline for some time. That has now ended. It remains to be seen if this is a new trend. There is some indication of this: given the solidity of consumer spending we can assume, on good grounds, that household finances remain stable. Therefore they will continue to demand new homes.

I would not expect a home-construction boom, not by any measure. However, a small tick upward is likely in the first quarter of this year.

The one variable that raises a bit of concern is government spending. On the one hand, we have seen strong growth in defense spending - more than four percent per year for five quarters straight - but on the other hand non-defense spending by the federal government is now up to a four-percent annual rate. So far, this is only one quarter, which of course does not make a trend. However, we also see an uptick in the growth rate of state and local government spending, suggesting that government overall is assuming a more active role in the economy.

With a big federal budget deficit and questionable finances across our states, this is a cause for concern as we go further into 2020.