If this depopulation trend continues, Wyoming will lose a Congressional seat in the 2030 Census...


Friends, there is good news in the Cowboy State: the resistance to tax hikes is growing. More and more people are becoming aware of what the legislature is up to, and more voices are joining the opposition.

Every little effort counts. This is it, folks. The tax hikers only have to win once. If they get their corporate income tax, that's it. It is over for Wyoming. As I reported recently, big retailers are already pulling back: while retail in general has been increasing employment - albeit weakly - so-called general merchandise stores are going in the opposite direction. This is an ominous sign that corporations who know they will be hit by the corporate income tax, are positioning themselves to soften the blow, should the tax become law.

It is not just big-box stores that would be hit. Consider what this would do to your bank, and to the competition between banks. As currently written, the corporate income tax would only apply to businesses with more than 100 shareholders. If your bank is among those, it will have to pay seven percent of its taxable income to the state of Wyoming. At the same time, the bank across the street may have so few shareholders that the tax does not apply to them.

Not to mention the credit union down the block.

It is not rocket science - not even economics really - to predict that when some businesses are burdened by a tax and some of their competitors are not, the result will be reduced competition. Those who are exempt, in other words those that our legislature would pick as winners, will get a cost-and-profit advantage over those whom the state has picked to pay the tax, i.e., to be the losers.

A reduction in competition among banks would be another blow to the Wyoming economy, one that we do not think about very often. Loans essential to the local community will become more expensive, especially those that depend closely on the individual consumer's finances. A mortgage loan is a fairly standardized product, but a car loan, a personal line of credit or a loan to a small business are localized, so to speak, to a much larger degree.

Reduced bank competition will make life more expensive for Wyoming families and entrepreneurs. More people will be encouraged to shut their small businesses and leave Wyoming. 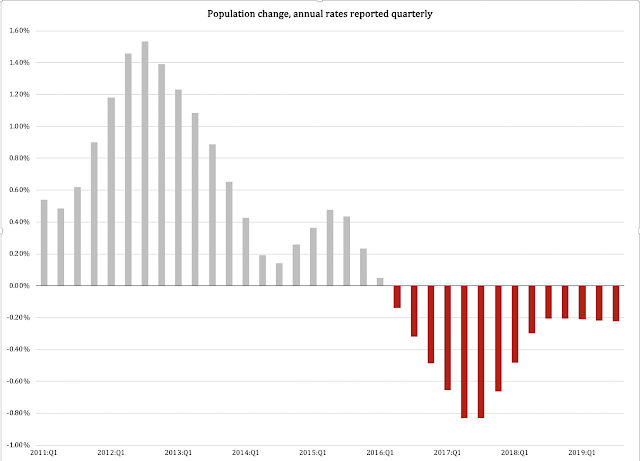 The switch from population growth to population decline coincides with the big downturn we saw in 2015-2016. To date we have only recovered about half the jobs we lost back then: today there are fewer people working in the private, tax-paying sector in Wyoming than there were five years ago. It is logical to see this correlation: if people can't support themselves, they will not stay.

And just to be clear: it is not just minerals that has seen a decline. As I have reported on several occasions, the non-minerals private sector is a mixed bag at best, in terms of jobs. In fact, in the latest GDP growth numbers more than 86 percent of our GDP expansion came from minerals - a sector where employment has been declining five months in a row now.

When the population leaves, so does the tax base. Figure 2 reports annual changes, again by quarter, in total personal income earned in Wyoming, and in personal transfer receipts. These transfers include Social Security, Medicare, Medicaid and other entitlements such as the EITC and what is often lumped together as "welfare". Transfers also include Veterans Benefits.

These changes (left vertical axis) are displayed on top of the trend on population (right), for reasons we will get back to in just a second:

To start with income, it fluctuates quite a bit in our state, more so than in most other states. The reason is not, as is often claimed, that a large part of our private workforce works in minerals - they don't. Minerals jobs, as important as they are, only account for ten percent of all private-sector jobs in our state.

No, the reason for the fluctuation is that minerals jobs pay so much better than jobs outside of minerals: the average job in the minerals sector compensates at about twice the level of a job in the rest of the private sector. When there are large fluctuations in such well-paid jobs it shows up in the personal-income data for our state.

Once our state's population started shrinking, that relationship was flipped. Over the 14 quarters in a row with shrinking population, personal income has grown by 2.7 percent per year, while transfers have increased by five percent per year.

What does this mean in practice? The population that remains in Wyoming is becoming increasingly dependent on taxpayers, even those who do not work for government.

Personal income is the fallback tax base: one way or the other, all taxes make their way into personal income. Some taxes are taken directly - think income and payroll taxes - while others are nabbed indirectly by means of taxes where se spend our money. However, business taxes also work their way into our personal income, either in the form of more expensive outlays (as businesses try to pass on the tax hikes to their customers as best they can) or through our employee status in the form of fewer hours, postponed or eliminated pay raises (even pay cuts), and hollowed-out or terminated benefits.

It is time for the legislature to scrap their plans for tax hikes. Their commitment to everything from a lodging tax to a corporate income tax is already depressing our state's economy, and doing so at a time when the national economy is forging ahead at a pace not seen in decades. People are leaving and the tax base is getting weaker, especially in counties represented by the tax-hike proponents on the Revenue Committee. Our growing dependency on government transfers and tax-paid jobs is setting us up for a major economic disaster when our state government runs out of money.