Wyoming is the only state in the country where private-sector jobs and wages declined in December. We are also the only state that is trying to increase the cost of doing business with a new corporate income tax.


Back in December I reported that the Wyoming economy was rapidly weakening in the aftermath of the Revenue Committee passing the corporate income tax. I noted that this weakening had started already in August, became clearly visible in October and continued through November. I also said that I was very worried about the December numbers on employment and earnings in the private sector.

Here are the annual changes in private-sector employment and weekly wages, state by state, for the month of December. Please note which state is farthest to the right: 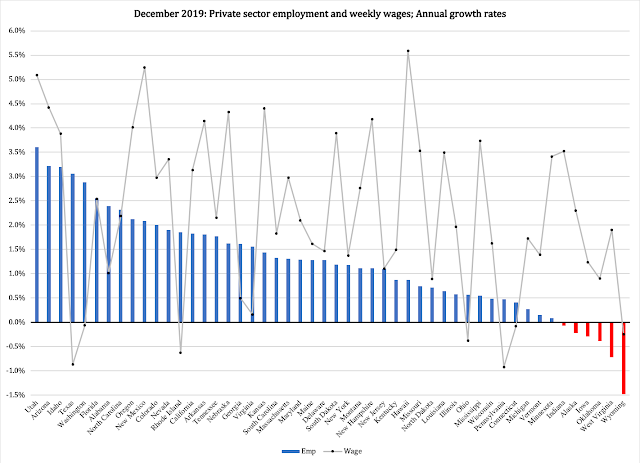 In other words, we had the worst change in private-sector employment in December 2019 over the same month in 2018. But that is not all: as the grey function indicates, seven states saw a drop in weekly wages but only Wyoming experienced a decline in both employment and earnings.

Figure 2 reports the same numbers for the entire fourth quarter. Thanks to a gradual shift in wages, from growth to decline, the net for the fourth quarter was still positive. The same cannot be said for employment, though: once again we end up worst in the nation. Behold: 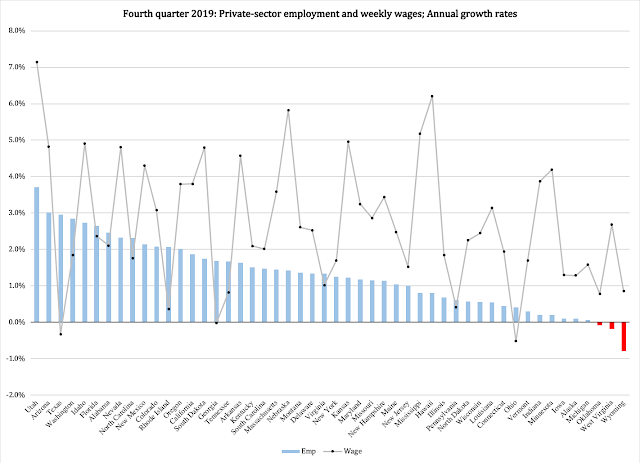 Now that we have established ourselves as the worst state in the country to look for a job, and one of the worst to earn a paycheck, let us look at ourselves from a temporal perspective. In case anyone is still in doubt whether or not the corporate income tax has anything to do with this, consider the dramatic change in employment numbers - and the weekly-wage trend - over the past two years: 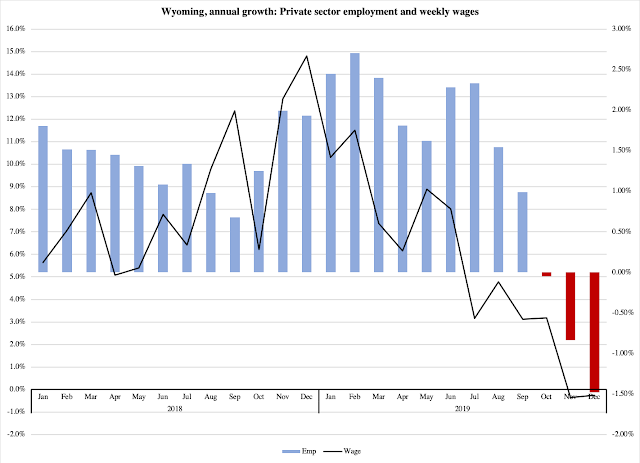 There is more. Returning to the December numbers, let us look at how much more - or less - private sector employees earned on a weekly basis. In 48 states the total package increased. For example, in Alaska total weekly wages paid out to private-sector workers increased by almost $5 million compared to the same month in 2018. In Colorado they went up by $117 million. South Dakotans took home $14.8 million more per week.

Only two states saw a decline in weekly private-sector paychecks: Pennsylvania and Wyoming.

December 2018 to December 2019, employees in the private sector in our state lost a total of $3.5 million in weekly wages. That is $184 million annualized.

This is money that is no longer being spent in local economies around our state. This is money that no longer goes into grocery stores, home improvement businesses, auto repair shops, gas stations, car dealerships, hair salons, insurance agencies, restaurants...

In this economy, the Revenue Committee majority keeps pushing for a corporate income tax. Not only that - you did see the gas tax bill, right?

It is hard to describe the push for higher taxes in general, and a corporate income tax in particular, as anything less than extremely irresponsible. It is a statement of macroeconomic illiteracy.