They say four percent GDP growth is not possible anymore. Then please explain why Hungary is at almost five percent.


In June last year I reported that Hungary was leading the European economy. Driven by both strong private consumption and formidable business investments, the Hungarians even left the traditionally solid German economy in the dust.

Now that Eurostat has published GDP data through the third quarter of last year, Hungary once again runs away from almost everyone else in Europe.

Technically, Ireland led the growth league in Q3 of 2019, but their growth is unevenly distributed and depends critically on exports and very volatile business investments:

Germany, a country often thought of as an unstoppable macroeconomic machine, is now at the bottom of the growth league. There is nothing spectacular about any component of the German economy, not even business investments, which is only the 16th best in the EU.

The U.K., which is not included in the EU numbers, was kept back by the Brexit turmoil; keep in mind that this is the third quarter of 2019. Expect strong growth in the British economy going forward.

Economically speaking, it is also better to have a private-spending based economy rather than an economy vulnerable to the ups and downs in the global economy. It keeps growth more steady over time, it provides a more predictable tax base for the welfare state (until we reform it away) and it makes markets more stable and long-term reliable for businesses. Over time, this also translates into more predictable job opportunities and private finances for families of all income layers.

It is interesting to note that the most solid performers in Europe also have pretty good private-consumption growth rates. Table 2a takes a longer look, covering the annual average growth rates for the four most recent quarters. Included are the five strongest growing economies, with the 27-nation EU and the 19-nation euro zone included for comparison:

The Irish economy again leads the pack at 5.37 percent, but its dependency on business investments is almost ridiculously well presented here. Hungary has a much more balanced economy: exceeding five percent in one year, with private consumption in excess of 4.8 percent, is simply spectacular.

Those here in America who say we cannot reach growth rates of yore, that anything above three percent is unsustainable, even unattainable, should take a closer look at these numbers. In fact, let us extend the time period from Table 2a to cover the past four years, i.e., 16 quarters:

The imbalance of the Irish economy is again put on full display. Their swings in business spending are so violent, in fact, that it is almost impossible to give a practical display of their macroeconomic data over time. Put simply: with a heavy reliance on a few, big business investment projects, the Irish have exposed their economy and their government finances to very volatile swings in income and the tax base.

We here in Wyoming can actually learn a thing or two from the Irish experience. We will get back to that later.

Table 2b again salutes Hungary, Poland, Estonia and Lithuania for their strong economic performance. With the exception of Poland, it is also interesting to see how government spending is restrained, almost stagnant. This obviously keeps a leash on taxes and leaves ample room for the private sector to grow.

Estonia and Hungary also have a fairly well balanced economy when it comes to foreign trade. In both countries, exports grew at rates largely comparable to private consumption, which again means that the economy is working at least as much for families and businesses within the country as it is for other markets.

The point about the balance between exports and domestic spending is important, but should also not be misconstrued. It is not a criticism of foreign trade; the point is, simply, that in many countries, fiscal and monetary policy are lopsidedly geared toward benefiting exports. This is a bad strategy emanating from the desire to raise taxes on households and businesses; by promoting exports, some politicians believe that they can get strong growth without having to acknowledge that high taxes and a big welfare state have a stagnant effect on the economy.

Ireland is in fact an example of what happens when you promote exports more than the domestic economy. With the exception of the Irish economy, the countries at the top of the European growth league have found reasonably good policy strategies to help the private sector grow and thrive. Compared to other European countries, especially basket cases like Sweden, these top performers are shining examples of how there is no end to what prosperity a country can accomplish if it wants to.

To reinforce this point, let us take a closer look at Hungary since 2014 (the end of the worst phase of the European austerity era): 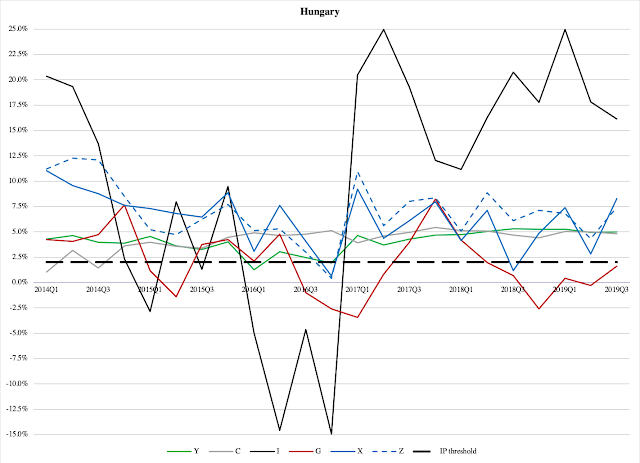 The high, sustained growth in consumer spending has led to high levels of business investments.

As for GDP, the Hungarians have now had nine straight quarters above four percent!

Congratulations, Budapest. You have a lot to teach the rest of Europe on economic policy.
at January 28, 2020