How to Best Protect the Taxpayer

There is growing support for a TABOR in Wyoming. At the same time, the support for tax hikes is weakening. Slowly, this supertanker is turning around.


Last week I did an informal poll in the Facebook group Cheyenne and Wyoming News. It is largely a non-partisan group with hundreds of members. I asked if Wyoming should adopt its own version of the Colorado Taxpayer Bill of Rights, TABOR. As of January 16, a total of 95 people had voted. Here is what they said (identifying details removed for privacy purposes): 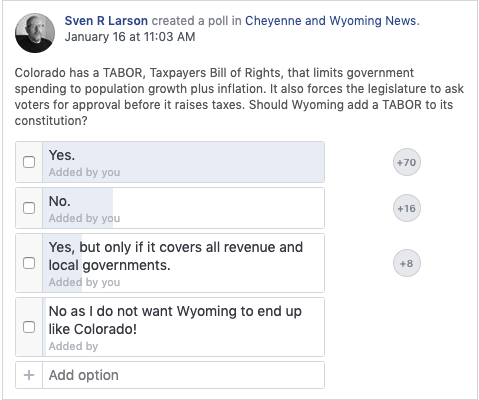 This is, of course, a highly informal poll, so the results are not to be taken as a definitive account of where voters in general stand on this issue. That said, there is clearly a widespread sense of weariness - not to say outright frustration - over how Taxmageddon keeps coming back every session.

Equally noticeable is how supporters of higher taxes gradually fade away. There are fewer and fewer people out there, in traditional media, social media and the political conversation, who advocate tax hikes with enthusiasm and conviction. We saw a lot of that 2-3 years ago, but even the proponents seem to be losing faith in their own cause.

It is easy to understand why. Wyoming keeps losing population; back on January 7 I noted that if this trend continues we will lose a Congressional seat in the 2030 Census* but the population we have lost already in the past three years is enough to start affecting the local tax base. Outbound migration also means that local markets for businesses stagnate or shrink: car dealerships sell fewer cars; local banks see a decline in lending; plumbers, roofers, landscapers and carpenters experience tougher times; retail businesses have to cut hours; and so on.

Even the most ardent tax hiker knows, deep down, that higher taxes cost money. Even those who think that "others" should pay higher taxes know that it never really turns out that way. Everyone pays sales taxes, everyone pays the gas tax at the pump, and everyone pays property taxes (landlords pass those taxes on to their tenants). Employers pass on their sales, excise and property taxes to their customers and their employees; those business owners who are doing well enough to take some money out for themselves (many don't) try to keep their own margin as low as possible to stay open.

Deep down, even the most dedicated proponent knows that the corporate income tax, higher sales taxes, a higher gas tax, higher property taxes, the lodging tax and other taxes, will make life tougher for families and businesses around Wyoming. A few people continue to argue for higher taxes out of sheer bloody-mindedness, but most of those who want higher taxes will eventually concede that it won't do any good in the end.

Many tax proponents come around because they realize that the alternative - reforming spending - is not that bad after all. The conventional-wisdom narrative about how even the tiniest spending cuts will leave our schools hollow and Medicaid enrollees dying in the streets, is of course complete nonsense. Nevertheless, it is understandable that many people balk at spending cuts because of the unfounded suggestions of what those cuts would do.

Fortunately, there are good reforms that can both reduce the size of government and make life better for all of us. Once we turn the conversation over to those reforms, a lot of the drama is drained from the resistance to tax hikes. All of a sudden, it is easier to stand up and protect the taxpayer.

However, the implementation of my Seven Spending Reforms list will take some time. We need them, and we will get them eventually, but we also need more immediate measures to help turn the big-government supertanker around. One of the best ways to get started is a Taxpayers Bill of Rights, or TABOR. I have been reluctant to this idea in the past, in part because of the mixed experience in Colorado, but I have become convinced that Wyoming needs its own TABOR, and we need it now. Our state's economy is in such bad shape that we cannot wait 3-4 years for the full effect of the spending reforms to materialize (although, again, those reforms are absolutely necessary).

We need to start reining in spending right now, and TABOR is the way to go. In fact, the specific design is of less importance than the effectiveness of the cornerstones: a leash on spending and a bulwark against tax hikes.

To make it work, one of the questions we need to sort out is how exactly the taxpayer protection mechanism is going to work. One part is clear: there will be no new taxes and no tax hikes unless approved in a general election. The other part is how to refund taxpayers when tax revenue exceeds permitted spending.

The new year has brought reduced income tax rates to two Democrat-run states: Colorado and Massachusetts. These income tax cuts were the result of two and nearly three decade old laws that triggered this new round of income tax relief in the face of opposition from progressive politicians who control state government in Denver and Boston.

The cut in Massachusetts, Gleason explains, is

Unlike Colorado, the Bay State does not have a formal TABOR, but taxpayers can still enjoy relief. As Gleason reports, this includes the Beaver State:

Another blue state with a Democrat-run state government whose residents are set to receive triggered tax relief this year is Oregon. Last summer Oregon state economists announced that state revenue collections for the biennium exceeded expectations by $2.6 billion, with Oregon's $3.7 billion rainy day fund now the largest in state history. Approximately $1.5 billion f that surplus will soon be going back to Oregon taxpayers in the form of income tax credits. That's because Oregon has an automatic taxpayer refund law approved by voters in 2000, referred to as the "kicker", which is triggered when personal income tax receipts exceed projections by 2% or more.

To make a taxpayer protection measure work in Wyoming, we obviously have to find another refund mechanism than the income tax. That is a practical matter, one that should in no way discourage the pursuit of a WyoTABOR. One idea is to create a refund based on the property tax.

There are other technical aspects to a WyoTABOR that must be ironed out, but as other states have shown us there is a solution to every problem. All it takes is the legislative will to make it happen.
---
*) Based on how some people reacted to my January 7 article, let me stress that the Congressional-seat comment is a joke.
at January 22, 2020