Greece: A Lesson for Wyoming


In yesterday's article I explained how Hungary still holds the position as the strongest economy in Europe. Economic growth sustains well above four percent, business investments are high and stable, and private consumption - all kinds of household spending - is growing faster than here in America.

In a coming article we will take a look at what the Hungarians have done right. First, though, we should look at the other end of the spectrum, namely Greece. This European basket case has a lot to teach us here in Wyoming.

Why? Because for the past ten years we have been the American basket case, with the slowest-growing economy and the weakest tax-base expansion. We currently have the weakest job market in the country.

To really drive home the Greek parallel, our lawmakers are trying raising taxes on a weak economy.

Figure 1 presents three aspects of the Greek economy form the past 12 years:

Before the Great Recession total tax revenue claimed about 40 percent of the Greek GDP. This is, of course, significantly higher than the approximately 25 percent that the state of Wyoming and our local governments take in every year from taxes, fees and other charges. However, the point here is not the absolute level, but how it changes in interaction with growth in GDP and in tax revenue: 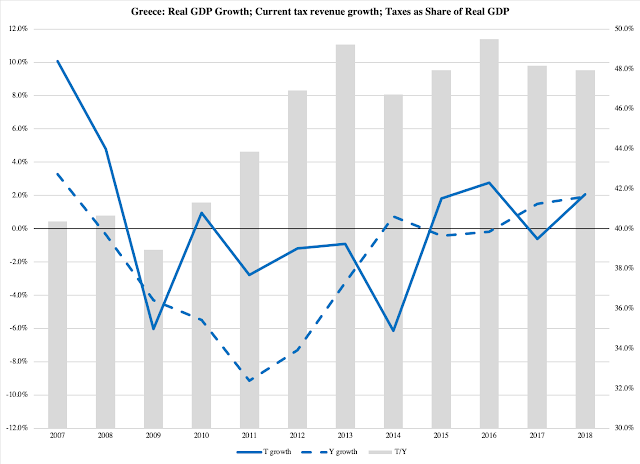 Starting in 2010 Greece was subjected to harsh austerity policies from the European Union, the European Central Bank and the International Monetary Fund. Unlike Wyoming, Greece did not have massive reserves saved up in some government bank account somewhere, thus needing big bailout cash to make ends meet once the Great Recession set in. The austerity policies consisted primarily of tax hikes, secondarily on disorganized spending cuts (which are not to be confused with proactive, structural spending reductions).

To highlight the Wyoming parallel, Figure 1b divides the 12-year Greek overview into five distinct episodes: 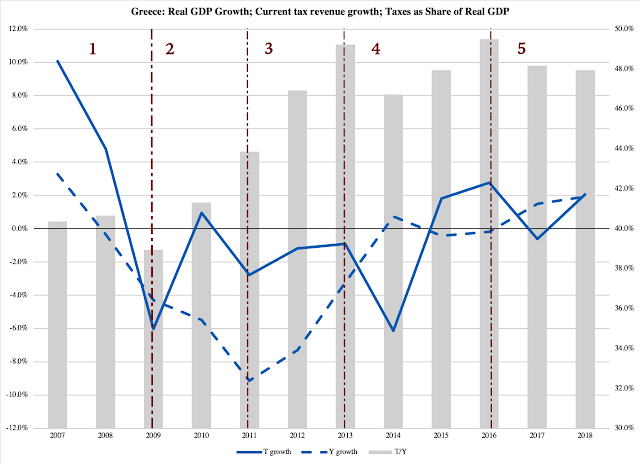 Episode 1. An economy with good GDP growth plunges into a deep recession. The growth rate tumbles from from almost four percent per year to a decline of four percent.

As a result of the recession, tax revenue also takes a sharp tumble. This causes a massive budget deficit to open up. We saw the very same thing happen in Wyoming in 2015-2016 when our state GDP dropped. We lost more than 17,000 private-sector jobs and a big gap opened up in the budget.

Episode 2. Under the thumb of the EU-ECB-IMF austerity demands, Greece raised taxes. And massively. Note how tax revenue initially increased in 2010 - or, more accurately, went from declining to growing - but how the decline in GDP from Episode 1 continued.

This difference is crucial. By this time Greece was in macroeconomic free fall. From 2009 to 2014 one quarter of the economy vanished, went up in smoke, was destroyed. The equivalent for Wyoming would be to lose $10 billion (with a B) in business sales, personal income, consumer spending and corporate investments. It would mean the loss of 55,000 jobs, more than three times what we lost in 2015-2016.

Greek politicians, however, only looked at the initial positive change in tax revenue. That was all that mattered to them. They thought they had solved the budget problems with their initial austerity packages, but since the tax hikes caused GDP to take a tumble the economic base from which that tax revenue was produced, fell precipitously.

We can see this in Episode 3, where tax revenue once again is shrinking. The initial tax hikes and disorganized spending cuts did not work, so the Greek government gave its economy more of the same medicine.

The combined effect of all the tax hikes in 2010-2014 translated into a rise in the total tax burden from 40 percent of GDP to 49 percent. Every business, every family in Greece was, on average, giving up nine percent more of their hard-earned money to government.

It is important to remember that the rise in the tax burden was not only a direct effect of the tax hikes, but also an indirect effect. Since the massive tax hikes caused GDP to decline, the ratio was aggravated both through the numerator and the denominator.

Speaking of GDP, its drop that began in 2009 stopped in 2014 when, again, one quarter of all economic activity had disappeared. By this point, one third of the workforce was unemployed; youth unemployment was 60 percent (compared to 18 percent at the very worst point here in the United States).

In Episode 4, austerity measures tapered off, though they did not go away entirely. Like someone poking you in the arm with a very small needle, the politicians in Athens kept irritating their economy with new, equally disorganized spending cuts and new tax measures. While GDP no longer declined, it also did not increase.

Of course, when the Greek government saw that GDP was no longer collapsing, in 2016 they went back to raising taxes. As a result, they saw another initial increase in tax revenue which, predictably, was followed by another point of stagnation.

Recently, austerity measures have been few and far between. This has allowed the Greek economy to at least catch its breath. Minuscule growth has recovered a tiny bit of the massive losses from 2009-2014, but still today real per-capita GDP in Greece is no better than it was in 2001 and 2002.

Imagine making today what you made 18 years ago, doing what you do today, with today's cost of living.

So far, Wyoming is only at the end of Episode 1, but our legislative leadership is desperately trying to push us over the line into Episode 2. They crave that spike in tax revenue, ignoring what happens to business activity, jobs, family income and corporate investments.

Speaking of which: during Episodes 2 and 3 the Greek economy lost two thirds of its business investments. The barrage of higher taxes not only raised the cost of doing business, but also made it much more unpredictable. Entrepreneurs, venture capitalists, corporations and others who otherwise would have committed money and other resources to Greece, went to look for more business-friendly places to invest.

In their case, Hungary was the place to go. In our case, once Wyoming has punished the private sector for not paying enough to satisfy government, businesses and families have 49 other states to go to where they can do better.
---
*) Normally you do not compare growth rates in current-price and inflation-adjusted series. However, there are no raw data for tax revenue in deflated values. It would merit the calculations to convert current-price tax revenue based on the Greek GDP deflator from Eurostat's national-accounts database, but it is not precise enough to merit the work for this article. Furthermore, average inflation during this time period was only a hair above 0.6 percent per year. In other words, it would be difficult to identify a meaningful improvement in the precision of the data.
at January 29, 2020