This latest forecast from the state's own Economic Analysis Division should send a chill down the spine of even the most ardent tax hiker in our legislature.


I have to say that my respect for the Consensus Revenue Estimating Group, CREG, has improved in the last couple of years. A few years ago I criticized them - rightfully so - for their grossly inaccurate forecasting. I explained that if NASA tried to launch a rocket to Mars with the same precision, it would land on Venus. Since then, CREG has clearly ramped up its game, done a lot to improve its analysis and - above all - become more measured in the way it presents its numbers. 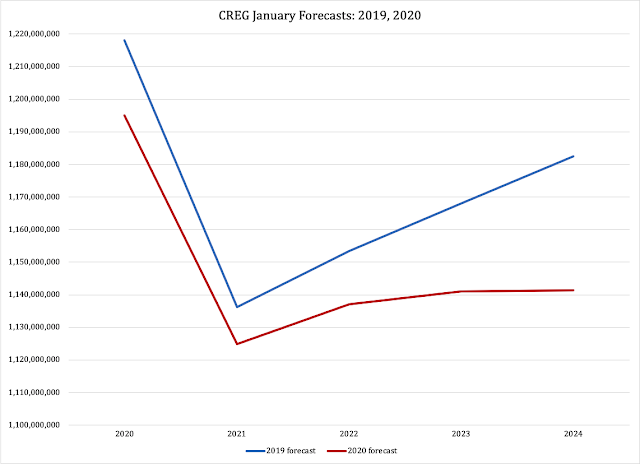 Cumulatively over these five years, the new forecast suggests that the General Fund will have $118.5 million less to spend. This number is not very big compared to the budget as a whole, but it carries two important pieces of information in it, pieces that CREG neither can nor should spell out:

a) It is a warning to our lawmakers that they need to stop thinking about how to spend more money and start thinking about spending cuts; and
b) The downgrade of the revenue forecast increases over time, indicating that the revenue problem is permanent.

To readers of this blog, neither point comes as a surprise, but it is nice to see that the good folks over at CREG are now sending the right kind of signals to our legislators.

As a reinforcement of this signal, CREG also predicts that the composition of General Fund revenue will remain stable. An often-heard suggestion is that our revenue problems are entirely the works of severance taxes declining. There is some truth to that, but only some. Figure 2 reports the General Fund revenue composition from 2011 as consisting of (bottom to top) severance taxes, sales and use taxes, mineral trust-fund revenue (PWMTF), pooled income, assorted charges, franchise-tax revenue, and other sources.

As we can see, severance taxes account for less than 20 percent of all revenue, and the share has not changed that much over the past few years: 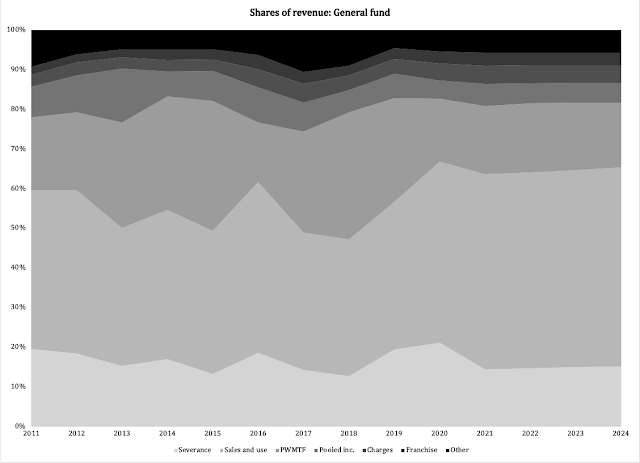 The minerals industry as such is responsible for more than severance taxes, but in this context the tax form is more important than who pays it. Each tax has its own impact on the economy, with severance taxes reflecting production activity while sales taxes indicate variations in consumer and business spending. If we had no foreign trade the two would be identical in the aggregate, but since we trade across state and national lines, they will always give us two different types of signals about the economy.

Since the composition of General Fund revenue remains stable over time, the change in the CREG forecast has a broader, macroeconomic foundation. It goes hand in glove with what I have been reporting, especially throughout the past six months: after recovering from the 2015-2016 slump the Wyoming economy is once again drifting into stagnation. I have pointed to three indicators suggesting this:

1. The GDP growth we saw in the first three quarters of 2019 was almost entirely driven by minerals, meaning that the non-minerals private sector is generally standing still;
2. Our GDP trend is behind the nation as a whole, especially outside of minerals; and
3. The trend on the labor market is consistently negative, especially in the fourth quarter, with a dip in employment, wages and hours worked.

Taking all these trends together, it is simply not possible to make any other forecast for our state government than one of revenue stagnation. I would not be as bold as CREG and predict that revenue would be stagnant. I would suggest a decline in revenue, especially if the Revenue Committee leadership get all the new and higher taxes they want.

I would also add a scenario where I look at the impact on our state government from a decline in federal funds. That will happen at some point, when our federal government goes into the same fiscal panic mode that we now see in New York. It is not within the assignment that CREG has to do such forecasts, therefore I will try to get around to it when time permits.

For now, let us hope that our legislators will draw the right conclusions from this January CREG report. The big problem, namely, is that the way they have designed government spending programs, their outlays increase on autopilot.

Only structural spending reform can fix that. Fortunately, I have a list for our lawmakers to consider!
at January 13, 2020