America and the Liquidity Trap, Part 1

I have been warning about this... and here it comes.

Back in November I reported numbers on economic growth and interest rates from Europe showing how a virtual zero-rate policy has failed to deliver any macroeconomic benefits for the continent. I also explained how the European experience is relevant to America:

There is a clear message for Congress in these [numbers]: you cannot rely on monetary policy to save you. When interest rates fall below zero - with the federal funds rate dictating the path for Treasury bond yields - it will not help the economy grow. When the economy gets stuck in slow-to-stagnant growth rates, the same applies to tax revenue. With continued growth in spending, this means one thing, and one thing only: perennial, growing deficits.

Now the outgoing governor of the Bank of England, Mark Carney, echoes my analysis. In the Financial Times, January 8 (print edition, front page) he states, bluntly, that monetary policy generally is reaching the end of the rope:

In the event of a deeper recession, Carney continued,

it's not clear that monetary policy would have sufficient space.

The Financial Times spells out what this is: a liquidity trap. Often derided as a figment of Keynesian imagination, this phenomenon is actually very real. It was one of Keynes's most important contributions to macroeconomic theory to define it and explain its effects on employment and economic growth.

Briefly, the liquidity trap is a situation where interest rates no longer have any effect on capital formation and consumer spending. Keynes did not consider the latter, but given the modern credit economy the same liquidity-trap mechanisms that apply to business investments also apply to consumer spending.

Interest rates do not have to reach negative, not even zero, in a liquidity trap. All that is needed for the trap to close on the economy is that a cut in the interest rate will not make any more business investment opportunities profitable, nor will it make credit-based spending any more affordable for consumers. There are a number of reasons why this happens, but the mechanism that activates the trap is really very simple: an excess supply of liquidity in the economy.

Figure 1 explains the liquidity trap using a slightly modified version of the standard monetary-equilibrium model from your garden-variety macroeconomics textbook:

1. Money is understood in a broader form than just cash. It includes various deposits that are as easily useable for payments as cash. For example, the money you have in your checking account falls under the same definition.
2. Money supply (Ms) is horizontal. This means, plainly, that the central bank will supply whatever amount of money it deems necessary at an interest rate that the bank sets.* The amount of money it prints is guided by a number of factors; for now, let us disregard them and simply think of the central bank sa an "interest rate setter".
3. Money demand (Md) is downward sloping, with the private sector demanding more of it the lower the interest rates are. The reason for this is simple: the higher the interest rates, the more profitable it is to put your money in an interest-bearing account (or some other form of investment) instead of keeping it in cash or some high-liquid, zero-rate form.
4. The intersection between money supply and money demand determines the amount of money being "used" in the economy at any given point in time. This equilibrium is static by the necessity of the model; in reality it is dynamic and fluctuates within a "liquidity zone".

There is a twist added to money demand, one that is not seen in the economics literature. The demand curve is assumed to change slope, from downward to vertical. This represents a "saturation point" that we will return to in a moment. First, consider an interest rate cut by the Federal Reserve. Technically, this happens through a reduction in the federal funds rate (arrow "a") whereupon consumers and businesses demand more liquidity ("b"): 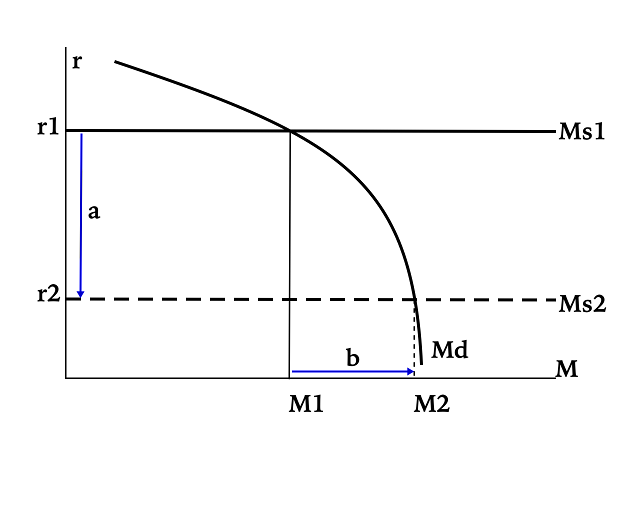 Initially, as the interest rate falls, there is quite a bit of pick-up in demand for money. This is the result of the rate cut making more investment projects profitable and more consumer spending affordable. However, as the rate drops the increase in money demand tapers off. This is due to the fact that the private sector runs out of use for more money.

Here is where things get tricky for many economists - and, we might add, the crazeball proponents of Mad Monetary Theory. Thinking still of the money demand curve as a straight line with a downward slope (as the segment above Ms1 in Figure 1) they believe that you can just continue to cut interest rates and the economy will continue to grow - even when interest rates are negative.

That is not the case, of course. One would have hoped that the central bankers of this world had realized that when they pushed interest rates below zero and they still saw no growth effects from it.

There are only two explanations for their decision to ignore reality: either they are too stupid to get it, or they have another reason than economic growth for pushing interest rates into liquidity-trap territory.

Central bankers are not stupid - I have met a coupe of them, and they are among the smartest practitioners of economics you can find. (I took a class in grad school for a former chief economic forecaster of the Bank of England, and he was extremely bright.) However, they do have another motive behind their interest-rate policy than economic growth. That motive, sadly, is to provide no-cost financing of government debt.

It is here that we find the real reason why many countries are in, or on the verge of, the liquidity trap. Nowhere has the urge to fund government debt wreaked more havoc than in Europe, where the ECB led the charge toward sub-zero interest rates during the Great Recession. Runaway budget deficits from Greece to Ireland put the continent's welfare states in grave danger; it came to a point where Europe's political leadership would have to choose between their ideological commitment to the welfare state and their deeply held desire to keep the euro zone together.

Their solution was the worst one: try to save both. They did it by means of crippling austerity programs. This allowed them to squeeze the welfare state into a tighter tax base (think of it as the fiscal-policy version of what Cinderella's sisters did for the glass shoe and the prince's hand) while giving the impression of saving Europe from a massive debt crisis. In reality, austerity prolonged the debt crisis while trapping Europe in economic stagnation and industrial poverty.

A key instrument in making austerity happen was unlimited central-bank funding of government debt. In the midst of the raging austerity campaign, 2009-2014, the European Central Bank declared that it would buy any amount of euro-denominated government debt from anyone inclined to sell, under a no-loss guarantee. In other words, if they thought it was necessary they would have printed the money necessary to buy up the entire government debt of every euro-zone country.

It never got that far, of course, but since this highly aggressive European version of the Federal Reserve's infamous Quantitative Easing policies meant printing gobs of money, it brought the euro-zone bank lending rate down below zero. This flooded the European economy with liquidity that nobody demanded: contrary to standard economic theory there is no linear relationship between interest rates and money demand.

Europe is now in the liquidity trap. Its economy can barely hold up two percent in GDP growth, and while budget deficits have shrunk conspicuously since the trough of the Great Recession, the price has been paid by families and businesses who literally live in industrial poverty. To them, the fact that their central bank has flooded the economy with cash is of no consequence and no meaning.

If we are not very careful, we will end up in a very similar situation. Jerome Powell over at the Federal Reserve has been clear and concise on this point: it is not a good idea to take the U.S. economy down toward zero interest rates, let alone into sub-zero territory. He is absolutely right here, but in declaring his concerns he also passes the buck - the deficit buck - to Congress.

America is not yet in the liquidity trap. We have seen reasonably strong growth since Trump took office and Republicans passed his big tax reform; despite some early warning signs this past summer I am convinced that we have not yet seen the end of this growth cycle. However, unless Congress gets its act together and starts reforming down its spending, we are going to end up in it.

For Part 2, click here.
---
*) It is normally described as vertical or upward-sloping; as monetary economists like Basil Moore have forcefully explained, the only reasonable representation of money supply is that it is horizontal.
at January 09, 2020