Why do local governments in Wyoming spend $1 billion per year on hospitals?


More than 20 percent of local-government expenditures go toward hospitals. This is the highest share in the country - only South Carolina beats us, and that is by a thin margin.

The national average for hospital spending by local governments is 5.6 percent, in other words a marginal expense.

Alaska, the most rural state in the country, has a share of 7.8 percent.

And before anyone suggests that states fill in where local governments don't spend money: the average share of state spending, across the country, going toward hospitals is even lower. Utah is an exception, with 9.4 percent of state spending being directed to hospitals. Beyond them, though, our neighbor states barely touch hospitals with their money.

I have warned for a long time that we are seeing a creeping socialization of our hospitals. This is based in part on the long-term trend in hospital employment, where government becomes more and more prominent. Figure 1 points in the same direction. In 2017, as these Census Bureau numbers show, hospital spending was second only to education:

Figure 1; spending in thousands of dollars 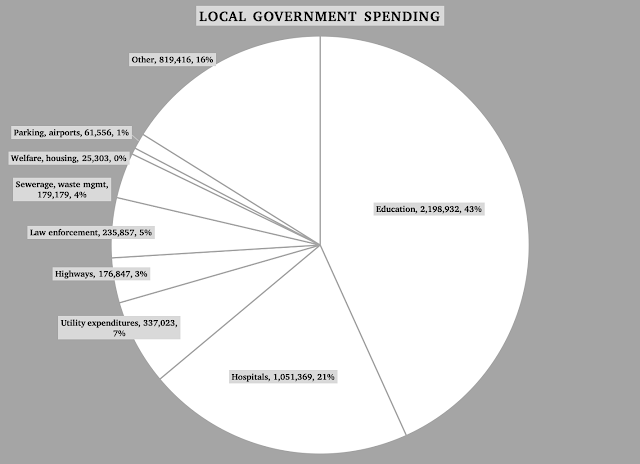 Another way to look at the cost of hospitals: the billion dollars in spending is almost exactly the same as the total amount local governments collect from property and sales taxes. Education spending, in turn, is only modestly more than what the state government sends to school districts:

Not all state funds going to local governments are for schools, but from a strict fiscal viewpoint we have, in practice, a state-funded K-12 school system. It would be possible, in other words, to restructure state and local government funding so that we have a state-funded K-12 voucher system, and to do this without the need for any more money to be poured into either our schools or any other government program.

With this restructuring we could easily create an Arizona-style ESA model, or a Wisconsin voucher system, and let the savings from the reform trickle back to taxpayers.

If I were a legislator I would be curious to know why there is such a discrepancy between capital spending on education and on hospitals. Are we building shrines of education, or are our hospitals in deplorable shape?

Looking strictly at the core functions of government, they account for a total of 20 percent of local government. These functions fall into two groups, the first of which consists of law enforcement, fire and rescue, highways and sewerage. The second group consists of utilities, parking facilities and airports.

The second group can be counted as core government functions under the public-good definition in microeconomics (which has to do with the character of the product, not who produces it) whereupon the markets for them would quickly be monopolized. That said, a private non-profit function is as good an alternative as putting these functions under government. With schools run under a separate funding model (as mentioned earlier) and hospitals being private, we would have a government small enough to be efficient, transparent - and affordable.

This was the last of four articles on Wyoming government finances. To read them all from the start, click on this link. Thank you!
at December 04, 2019