Today, Wyoming families depend on entitlements almost as much as we did during the Great Recession ten years ago. And this while the national economy is stronger than it has been in decades.

The latest numbers on Wyoming personal income are out. It is good news for you if you work in construction or in the federal government. Other than that, there is not a whole lot to be jubilant about. For one, families around Wyoming are becoming more dependent on entitlements to make ends meet. And this is happening in the midst of the strongest national economy in decades.

Superficially, things do not look too bad. With a growth rate of 4.3 percent, we are just a smidge behind the national average of 4.5 percent: 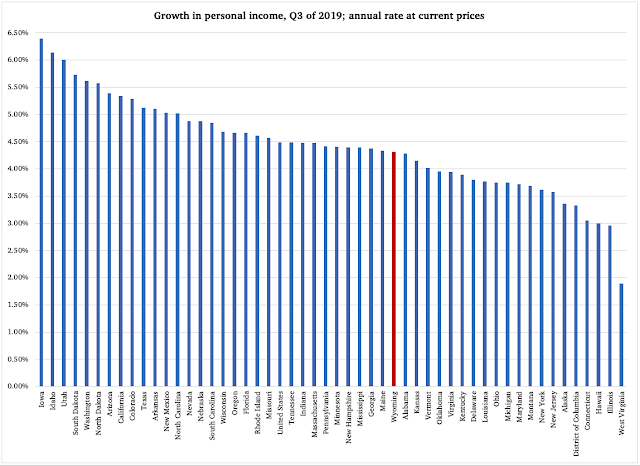 It is good, of course, to see some growth in personal income. The problem is that it is concentrated to a relatively narrow part of the economy, with 47 percent of the growth happening in construction and government.

There is also the entitlement part to this, which we will return to in a moment. First, though, an industry rundown.

As mentioned, the largest share of the growth comes from construction. Here are the top-five industries that contributed to the $816.7 million in year-over-year growth in personal income:

In all, construction workers earned $284 million more in Wyoming in the third quarter of this year, compared to the same quarter last year.

Government employees took home $94.4 million more, with almost half of that, or $45.9 million, going to federal employees. Almost none of that increase went to our military, which is regrettable - they deserve a lot more for what they do.

Construction and government accounted for 46.4 cents of every dollar in personal-income growth. At the bottom of the league we find minerals, which lost $1.9 million in personal income, and utilities where employees lost $12.5 million.

These numbers suggest a shift in GDP growth from the second quarter, when almost all our economic expansion was attributable to minerals. Based on these numbers for personal income, we can expect much less from minerals, but not much more from the rest of the economy. We have already seen how hiring in the private sector came virtually came to a standstill in the third quarter, conspicuously following in the footsteps of the Revenue Committee passing the corporate income-tax bill.

I would not be surprised if the GDP growth number for Q3 comes in the 1-1.5 percent bracket.

There is another component in the personal-income numbers that our legislators may want to consider, going into a tax-loaded session after New Year. People in our state gradually become more and more dependent on entitlements for their income: 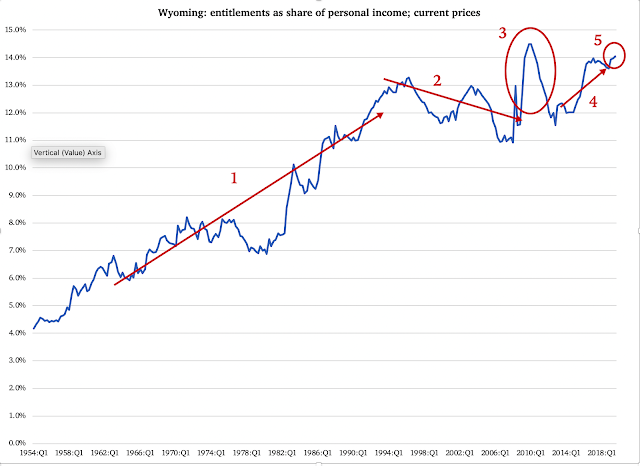 In these latest numbers, for Q3 2019, entitlements - tax-paid benefits provided either by the state or by the federal government - accounted for 14.1 percent of total personal income. This is the highest level ever in a growing economy; the only time it has been higher was during the Great Recession ten years ago.

The first period (arrow marked 1) in Figure 2 was the long phase-in of the egalitarian welfare state created under President Lyndon Johnson. The federal government rolled out all sorts of programs that had not existed, or not previously been around in the same format.

When the conservative counter-reaction to this welfare state took effect in the 1980s, the growth of LBJ's Great Society came to a halt (2). During the Clinton presidency fiscal conservatism returned to the White House for the first time since Eisenhower; in combination with a strongly growing economy this led to a decline in dependency on entitlements, here in Wyoming more than in the country as a whole.

The Great Recession (3) sharply increased dependency on government, but it was a temporary spike. When the national economy recovered it pulled us with it, though we did not do much on our own. With the slowest GDP growth among all the 50 states we actually fell behind the rest of the country. We can see this in a return to higher entitlement-dependency ratios during the so-called recovery (4).

Today, we as a state have returned to the same dependency rate as during the Great Recession (5). And this at a time when the national economy is doing better than it has in 20 or 50 years, depending on which metric you look at. In the past year, from Q3 2018 to Q3 2019, entitlement dependency has increased from 13.7 percent of personal income to 14.1 percent.

This may not seem to be much to write home about, but it means that Wyoming residents got almost  $140 million more in entitlements to live on in the third quarter of this year than they did a year earlier. Not only does this mean a growing burden for taxpayers to pay for, but it also means that we are inching closer to the 14.5-percent dependency ratio we saw at the bottom of the Great Recession.

And, again, this is happening while the U.S. economy is doing well. If this does not help us now, imagine what will happen to Wyoming families if our state legislature passes even some of the taxes it wants.
at December 20, 2019