When the Welfare State Strikes

The welfare state has fundamentally altered fiscal policy in the United States. The change, driven by a sustained increase in spending, is painfully visible in data on the federal budget.

At the same time, Congress has been reluctant to introducing the taxes needed to pay for that same Scandinavian welfare state. This is good, of course, since our economy would have been driven into the ground under the pressure of a value added tax up to 25 percent on most things you buy (including movie tickets and tap water), an income tax that starts above 30 percent on low incomes, a payroll tax in excess of 30 percent, $7/gallon gasoline thanks to taxes, and so on.

It is actually pretty easy to see how the deficits came about and started driving up our debt. Once the Scandinavian welfare state was introduced here in America, it forced a change in U.S. fiscal policy to accommodate for its increasingly costly spending programs.

The following figures cover the transition from the Roosevelt-era socially conservative welfare state to the Scandinavian, socialist welfare state. They use spending and revenue data for the federal budget (adjusted for inflation to highlight the policy intentions behind taxes and spending) courtesy of the Office of Management and Budget. The numbers on the vertical axis are annual growth rates.

Starting in the 1950s, we notice how smoothly revenue and and spending fluctuate. The exception (1) is related to the Korean war; once the cost of that war had worked its way through the budget there was a relatively persistent balance between tax revenue and spending (2) related almost entirely to the business cycle: 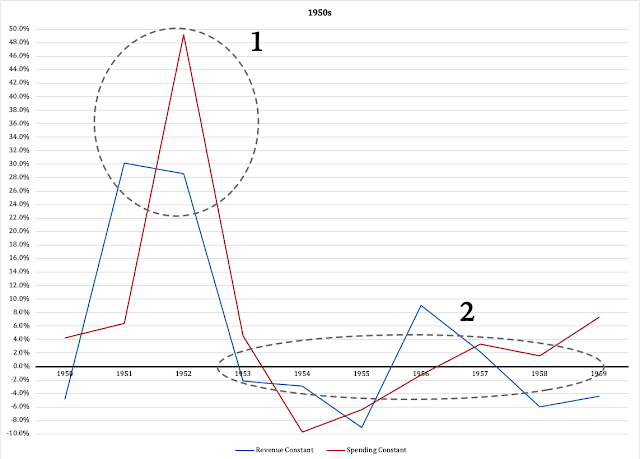 The relative stability continued through the first half of the 1960s, albeit with a somewhat more volatile pattern (3). The pattern is still essentially cyclical, as one would expect based on standard macroeconomic theory.

Things change drastically once the War on Poverty begins in 1964. A year later Congress starts rolling out President Lyndon Johnson's new entitlement programs, all of which with an ideological design borrowed directly from Sweden. This results in a significant rise in spending when the business cycle says it should not rise (4): 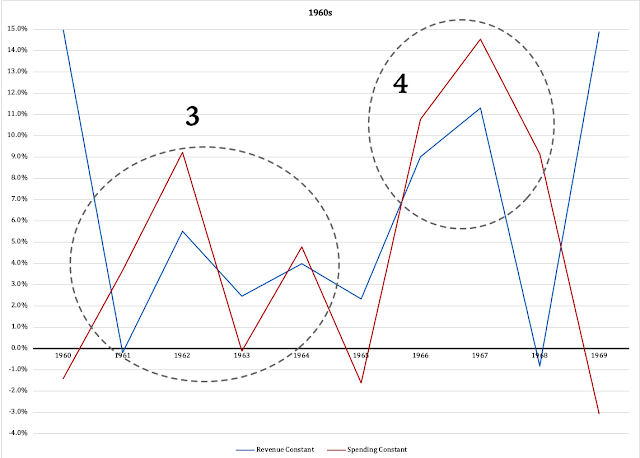 The welfare state roll-out continued during the 1970s, in part with the introduction of the Earned Income Tax Credit. Most of the programs introduced in the late 1960s were complete by the mid-70s, whereafter they had a permanent effect on federal spending (and please keep in mind that the numbers reported here are adjusted for inflation).

Tax revenue, on the other hand, continued to vary with the business cycle, laying the ground for a permanent budget deficit (5): 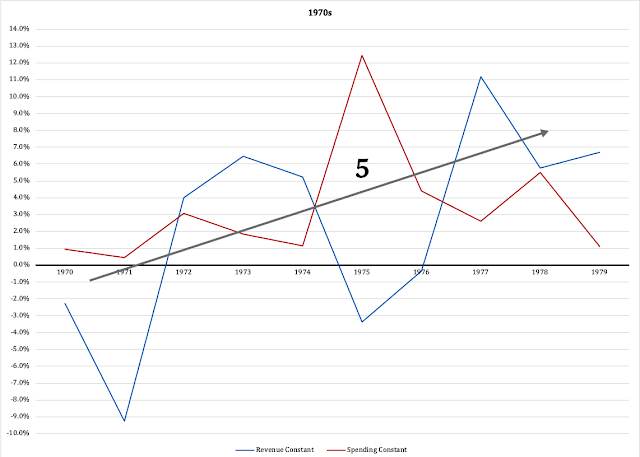 In the early 1980s we came off the stagflation era that began under President Carter. The economy revved up, but government spending kept growing. Compare the spending pattern here (6) to what it was like in the post-Korean War 1950s.

This is also the first point where Congress makes a substantial tax cut to stimulate economic growth. It worked in spades. The '80s economy was strong, with a seven-year long growth cycle, and it was thanks in no small part to Ronaldus Magnus and his tax reform.

As is always the case under the Laffer Curve, tax revenue falls at first (6) only to rise substantially later (7). The problem, of course, is that under the welfare state it is not possible to slam the brakes on spending to bring the budget into balance.

Notably, 1987 marked the first year since 1969 when inflation-adjusted federal spending did not grow. Sadly, that turned out to be an anomalous year; as we transitioned into the Bush Sr. presidency spending started growing again (9): 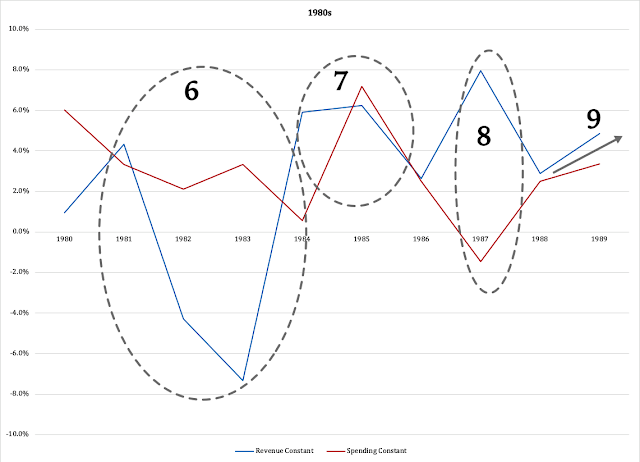 The recession of the early '90s pushed tax revenue into the negative (10) but it was not until Bill Clinton became president and seriously started working with Newt Gingrich and - especially - John Kasich to balance the federal budget, that some kind of spending restraint was applied. For the remainder of the hot-revving 1990s tax revenue outgrew spending (11), giving President Clinton the opportunity to sign four balanced budgets in a row: 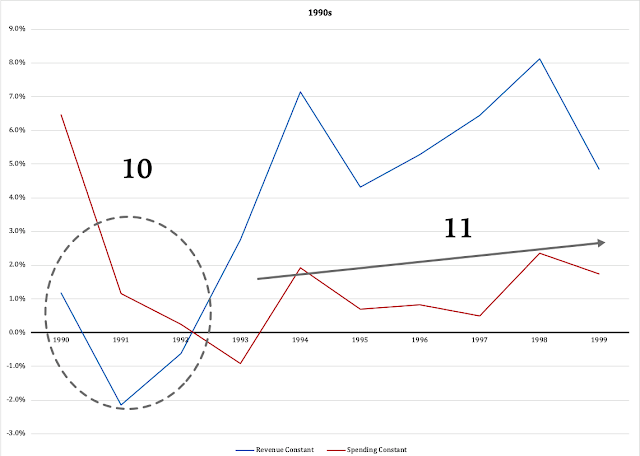 The Millennium Recession brought an abrupt end to the second longest, and most consistent, growth cycle in modern history. Federal spending, however, continued to grow (12) and the Bush administration responded by executing the second structural tax cut since the introduction of the socialist welfare state. Revenue declined initially, as one would expect; likewise expectably, revenue started growing substantially once the tax cuts had kicked the economy into another growth cycle (13).

Bush Jr. does not get enough credit for his fiscal policies. Yes, government spending grew, and he signed a hugely irresponsible bill to expand Medicare, but he also got the economy growing well enough to almost close the budget deficit; in 2007 the federal budget was within one year of balance. Instead, thanks to the Great Recession we got a galloping deficit and plummeting tax revenue: 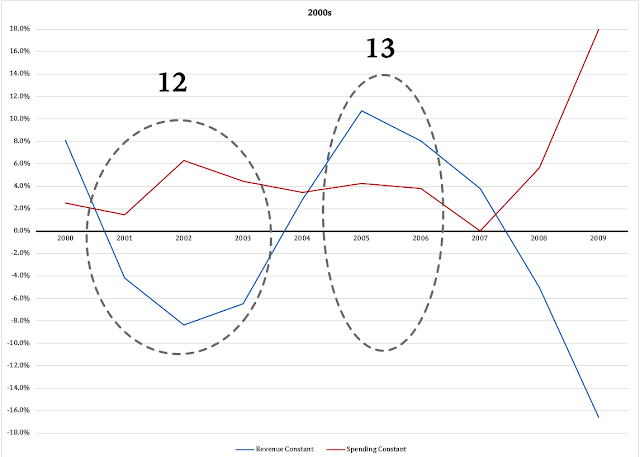 When the economy began recovering, tax revenue started increasing again (14). Spending actually declined (adjusted for inflation) for part of the Obama presidency. This was not Obama's wish - his ideological commitment was too far to the left, but his disdain for making a budget deal with the Republican-led House led to years on end with continuing spending resolutions. By design, this keeps spending from growing as the welfare state demands, but some of the decline in spending (15) was also the result of a phase-out of the ARRA stimulus bill.

During Obama, the economy never reached a full year of three-percent growth. As a result, once the boost in tax revenue from the initial recovery had ebbed out, tax revenue once again stagnated. It was not until Trump's deregulations and tax cuts kicked in that we saw growth rising again (albeit not to levels we actually need).

As always, the tax cuts cause an initial decline in tax revenue, followed by a boost (16). Sadly, spending began rising again, and substantially: 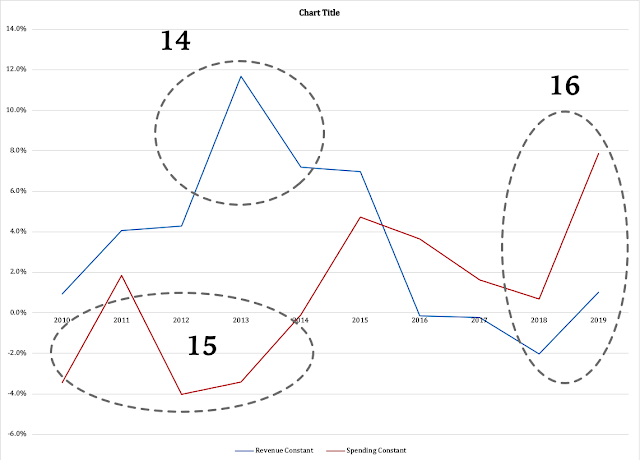 With this history in mind, it is easy to get pessimistic about the future. Government spending will continue to grow, at fairly substantial rates, especially if Congress is irresponsible enough to create a tax-funded family-leave program. In the meantime, tax revenue will continue to flow in, but not enough to keep up with spending.

The Office of Management and Budget believes differently...: 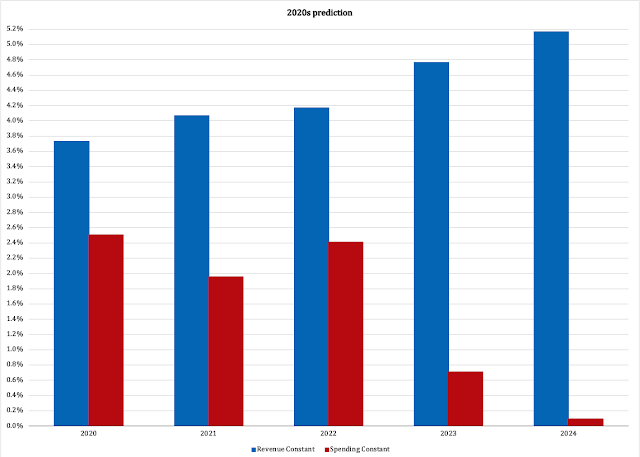 This is a pie-in-the-sky prediction that is recklessly far from the truth. It lures both the president and Congress into a false sense of security when it comes to our deficits and our government debt. That, in turn, has the effect of drawing their attention away from the real cause of the deficit: the socialist welfare state.

If, and only if, we get rid of that welfare state, can we save our country from a debt crisis. Only then can we get back to a budget that will fluctuate as smoothly over time as it did in the 1950s and early 1960s. Back then it was not that difficult to balance the budget over time.
at December 30, 2019