The American welfare state is about to take another leap forward. The Senate just agreed on adding one of the few missing pieces that will turn our welfare state into a full-scale socialist structure. No, this is not hype. It is happening right now.


Congress is about to add one of the few missing pieces that distinguish our welfare state from the standard European version. Reports Yahoo News:

The Senate’s top Democrat [Chuck Schumer] said Sunday that congressional leaders have reached a “real breakthrough” deal to give 12 weeks of paid parental leave to millions of federal workers as part of the annual defense policy bill. Sen. Charles Schumer said the agreement over the National Defense Authorization Act was reached late Friday night and a vote is expected later this week. The establishment of President Donald Trump’s proposed Space Force is also included in the bill.

To some degree, this is another instance of spending-as-usual deal making: Republicans want to increase military spending and Democrats hold the armed forces hostage so they can expand the welfare state. However, in this case the preference for welfare-state expansion is not isolated to one party. This is the first step toward a federal paid-leave program for all parents in America.

I also reported that the academic literature is entirely inconclusive on whether or not paid leave has any discernible effects - with one exception: when people get an entitlement, they use the entitlement. Beyond that, there is no particular evidence of any changes for the better in any of the variables that paid-leave proponents often mention.

There is more to be said about the European experience. More on that in a moment; first, let us get back to the Yahoo News article:

The must-pass bill includes a provision that would allow more than 2 million federal government workers to take paid leave to care for a new baby or for an adopted child. Parental leave was a priority for high-ranking Democrats, including Schumer and House Speaker Nancy Pelosi. ... “It’s a real breakthrough for families,” Schumer said, adding that Democrats hope the move will encourage more private employers to offer similar parental leave benefits.

No, that is not what will happen. This is the first step toward a paid-leave program for all, courtesy of taxpayers. In fact, Senator Schumer gives this away with his next comment:

“Not only does it mean that federal employees will get what they’re entitled to, the federal government is a pacesetter,” Schumer added. “If you work for a private company, this means the pressure on your employer will be much greater to give you parental leave as well when the blessed event of a child comes around, or god forbid your child is really sick and needs serious care.”

By declaring paid leave an "entitlement", Senator Schumer implies - not very subtly - that all workers should have access to the same tax-paid benefit. His comment about private employers providing it is just the usual Democrat tactic to pave the way, morally, for a new entitlement.

And just to remind everyone who big the support is for paid leave among Republicans, the Yahoo News story delivers this political punch line:

Ivanka Trump, the president's daughter and adviser, said Friday that such a provision would “mark a HUGE step forward towards making paid leave a reality for all Americans."

While all this is happening, in Sweden there is an emerging debate about rolling back paid family leave and introduce private options in it. That debate is not going to go anywhere - the private-option proponents are confined to a small center-right think tank - but it indicates a level of desperation in a country that stood model for the American welfare state.

The Swedish paid-leave program became fiscally unsustainable many years ago, with growing stinginess in how government provides the benefits as a measure to stave off a structural deficit. In fact, this stinginess has become visible in the numbers on how Swedish parents use their paid-leave benefits. The program, which consists of three parts, replaces on average 77.6 percent of eligible income over 390 days. Thereafter the income-dependent benefit is replaced by a base benefit equal to $20 per day, good for 90 days.

The definition of eligible income changes after the first 210 days (as per a reform of 2014) marginally lowering the benefits that parents are eligible for. The cap for income replacement is at approximately 110 percent of median household income.

Due to gradually tighter eligibility and benefits regulations, Swedish parents take fewer days now than they did 20-30 years ago. Figure 1 reports the average full-day equivalents* that a parent claims in any given year, while on paid family leave: 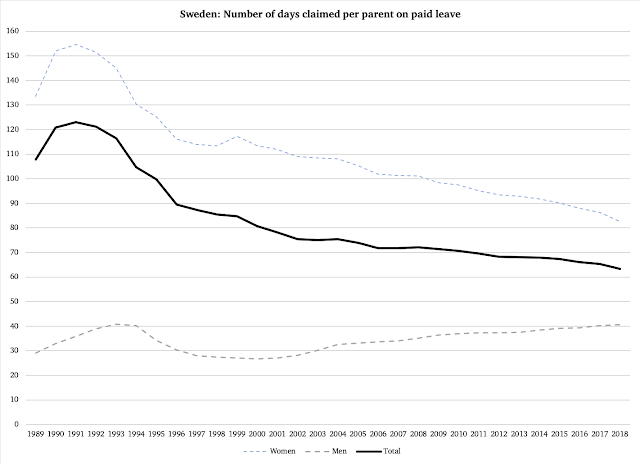 In addition to the obvious loss of income, the low income replacement rate has incentivized Swedish parents to innovative combinations of benefits and work. At full time, the paid-leave system technically replaces a parent's income seven days per week; since this means losing more than 20 percent of one's income every one of those days, some parents go back to work over the weekends. For someone with an office job and a regular Monday-Friday work week, this means signing into work when one does not have to work; earning income two days out of seven means more money during paid leave than would otherwise be the case.

This arrangement, which is an unintended consequence of the paid-leave system, saves days for the parent while increasing the cost for employers (who have to pay out salary for two days per week despite the person not working). Two thirds of Swedish parents take five days or fewer, out of the seven-day week, as paid leave. Some also combine paid leave with vacation time, which again is reimbursed at 100 percent, thus increasing income during paid leave.

As a result of the paid-leave system's eligibility criteria, a large segment of younger parents fail to qualify for income replacement. Instead, they end up with only the base benefit; more than half of all mothers younger than 25 only get the $20-day benefit during their paid leave.

All in all, the Swedish system is far from as glamorous as it is sometimes portrayed to be. On the contrary, Sweden is a good example of why the United States should not add a paid-leave program to the roster. It is not the only example; Rachel Greszler over at the Heritage Foundation has covered many others, leaving common-sense minded people wondering why Congress still has to push ahead with it.