Circling back to the question of whether or not Wyoming should adopt a Taxpayers Bill of Rights.


Another record month for this blog! Thank you!

As my good friend Patrick Gleason with Americans for Tax Reform explains in his latest Forbes column, our legislators here in Wyoming are going against a national trend with their stubborn pursuit of higher taxes. The biggest threat we face is the corporate income tax, which, Gleason explains, would take us

in the opposite direction of competing states like North Carolina, Florida, Texas, New Mexico, Missouri, Indiana and New Hampshire, where corporate and business tax rates have been cut in recent years.

He also notes that Florida, Missouri and New Jersey reduce their corporate tax rates with the new year.

New Jersey, of all states, is going in the right direction while we here in Wyoming are working our fingers to the bone trying to raise taxes.

This might be a good point to throw in a couple of quotes from Hamlet, but beyond that there is the question of what we can do, long term, to once and for all put an end to this mad dash to destroy our state's economy. There are two obvious steps our state can take:

1. An absolute, uncompromising, unwavering no to any new or higher taxes.
2. Begin the work on structural spending reforms.

There is also a third option, one that does not replace the other two but rather adds some structure to the whole process: a taxpayer's bill of rights, or TABOR. This constitutional instrument, designed to protect taxpayers from irresponsible tax hikes, has been in place in Colorado since approved by voters there in 1992. It has been the target of repeated attacks from the left, and a 2020 ballot initiative seeks to repeal it entirely.

No doubt, the fight to keep TABOR in Colorado will ramp up the closer we get to the November elections, but the debate will not stop at the border. There are proponents of a TABOR here in Wyoming as well: two years ago Representative Chuck Gray sponsored a bill to create a taxpayers' bill of rights that would have become part of the Wyoming constitution.

I applaud Representative Gray for taking this bold initiative. He is a thought leader with courage and principles. There are not many lawmakers here in Wyoming who are willing to even discuss such structural reforms and taxpayer-protection measures. I have known Representative Gray for several years and I have a great deal of respect for his steadfast commitment to economic and individual freedom.

That said, I was not entirely onboard with his bill, noting at the time that there were exceptions to the TABOR restrictions that gave legislators too much leeway to raise taxes. Gray's bill allowed for "an emergency tax or budget increase", putting in place specific measures for how to declare such an emergency. I asked:

What constitutes an emergency? According to the bill, anything that two thirds of the legislature would define as an emergency. A budget deficit is presumably a prime example of an emergency. In other words, under this TABOR model, the legislature can circumvent the voter approval requirement for tax increases by simply agreeing - by two thirds majority - that there is an emergency deficit in the budget. ... Suppose CREG declares that we have a multi-year deficit ahead of us that will stretch out over three, four, maybe five years. It does not take much imagination to see how a report like that could constitute grounds for an emergency tax vote in the legislature.

These are not definitive arguments against a Wyoming TABOR, more questions of how we can prevent that the tax hikers find a way around it. As a concept, I think TABOR is worth a serious look, and there are ways to design it to prevent big spenders from neutralizing it with loopholes.

My concerns are not only based on the specific design of a Wyoming TABOR, but also on the experience from Colorado. Ultimately, the purpose of TABOR is to restrain government spending and thereby ease, even eliminate, the pressure on the legislature to raise taxes. In a manner of speaking, TABOR delegates fiscal conservatism away from the lawmakers to the constitution.

Over the years, TABOR proponents in Colorado have often made the point that the measure has prevented increases in spending that would most certainly have happened otherwise. They may very well be right. That said, though, there is no way to establish that TABOR has had any lasting fiscally conservative influence on Colorado: judging from the state's record of state government spending since TABOR was passed, the most forceful argument in its favor appears to be, again, that it has prevented even more spending from happening.

Figure 1 reports annual average growth rates in Colorado state spending, compared to the U.S. average for state spending growth. For the first five years, the lawmakers in Denver kept apace with the national average, dropping slightly below it for the next five years. However, after the ten-year TABOR anniversary spending has grown noticeably faster in Colorado: 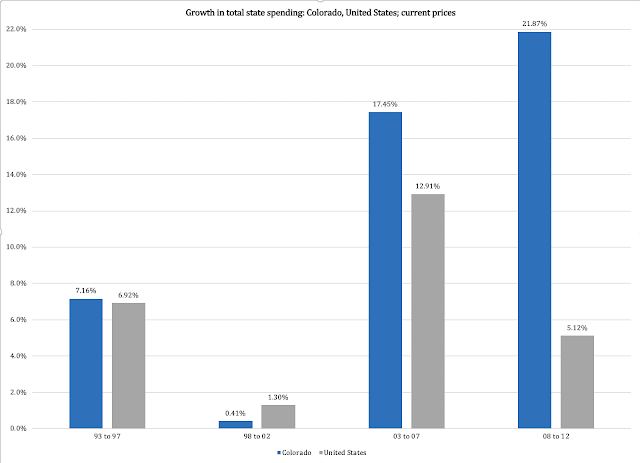 Here we see the first evidence of a structural weakness on the Colorado TABOR. Since it only applies to the General Fund, it came from the start with an incentive to divert spending into the Other Funds category of appropriations. According to the National Association of State Budget Officers, this appears to be exactly what happened:

There is, however, also the possibility that the spending growth at least in part can be explained by population growth. One of the features of TABOR is that it ties General Fund appropriations to inflation and population; controlling for this, Figure 2 reports that total state spending - including Other Funds - in Colorado has actually grown in tandem with the national state average: 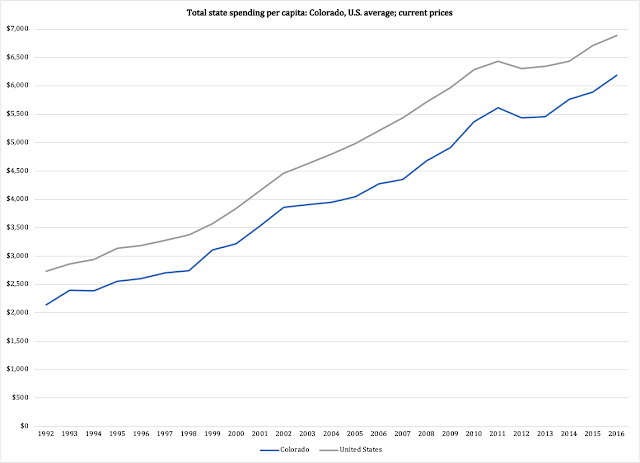 The inevitable conclusion is that TABOR in Colorado, while a good idea as a concept, has not had any distinguishable effects on spending compared to the rest of the country. That does not mean its proponents are wrong when they claim it has stopped excessive spending - on the contrary, given how Colorado has turned politically to the left, especially in the past ten years, I would not be surprised to find that TABOR has at least held back the spending frenzy.

However, a TABOR for Wyoming needs more teeth than the version currently in effect south of our border. In my analysis from two years ago of Representative Gray's TABOR proposal I suggested four features that would make this happen:

1. A universal legislative vote requirement for tax hikes. This would be a somewhat modified version of the same feature in Representative Gray's HJ0007 from 2018. In his bill, Gray suggested a 2/3 majority among legislators to raise taxes. The same feature should apply if voters are asked to raise taxes: to actually raise or create new taxes, our legislature would have to put the proposal on the ballot and get two out of three voters to approve it.

2. A current-revenue funding mandate. This means, plain and simple, that you cannot use deficits to fund any state spending. There are two parts to this mandate:
a) We would need statutory or constitutional language forcing our state government to deposit any budget surplus into a budget stabilization account, such as LSRA. Then, as a recession strikes, the only money that the legislature could tap into would be what has been deposited into that account. Once these funds run dry, it is time to cut spending, no matter how painful it might be for the education bureaucracy and others.
b) It applies to all state funds: General, Federal and Other. The reason for including Other is obvious given the Colorado experience; the reason for including Federal is that most federally funded programs come with state maintenance-of-effort requirements, automatically driving up state spending when federal funding goes up. Wyoming must have a requirement to refuse such increases built into its own TABOR.

3. Priority of funding. This measure comes in two parts.
a) So long as there is money in LSRA, the legislature cannot vote to raise taxes, nor call for voter approval of such tax hikes. The point with this feature is to force the legislature into a corner where they really do not want to be, namely where they have to adjust spending downward and avoid excesses in good times, in order to have enough money in the LSRA.
b) Law enforcement, fire and rescue and transportation must be protected from cyclical spending cuts. Everything else, outside of the core functions of government, is open to cyclical cuts.

4. Structural spending reform. If, once the budget stabilization money has been spent, two thirds of the voters do not approve of a tax hike, the state legislature is stuck with only one option: structural, permanent reductions in state spending. This would mean elimination of programs, employee positions and agencies that will not be replaced or reappear in a reformed format.

These are some features that would vouch for a stronger TABOR in Wyoming. Again, the idea is good in principle; with the right design it could actually do us a great deal of good as a state.
at December 31, 2019