Is there such a thing as a shield that can protect government revenue from the ups and downs of the business cycle? No, there isn't. But some lawmakers apparently still believe they can find it.


Many Wyoming lawmakers seem to be operating on the premise that government not only should, but in fact can be shielded from the ups and downs in the business cycle. The purpose behind the "comprehensive tax review" that legislators have been talking about for three years now, is to find a revenue model that keeps taxes pouring in to state coffers at unchanged rates - even as taxpayers lose business, jobs and property.

There is no such revenue model. It does not exist. To see why, let us walk through some statistics on business activity and the cycles of employment and earnings in the private sector. First, though, to put those numbers in a coherent context, here is a theoretical explanation of the macroeconomic and fiscal mechanics that make the "government revenue shield" impossible.

Suppose government spending (G) is $1,000 per month. Gross domectic product, or total economic activity (Y), is $10,000 per month and taxes (T) collect ten percent of that in revenue for government.

Suppose a recession happens. Total economic activity declines for five months before recovering. If we keep tax rates unchanged, tax revenue will decline proportionately to economic activity. A deficit opens up in the state budget, and it does not go away until, by month eight, revenue is growing strong enough to return the budget to a surplus: 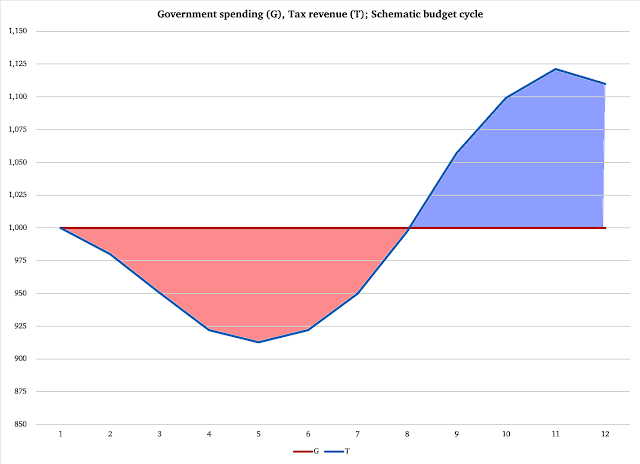 Back in the day, economists - and therefore a lot of other people - were of the conventional wisdom that the business cycle was smooth and predictable. Therefore, it was said, government could balance its budget in every business cycle. Surpluses would pay for deficits. However, that old adage is based on about a decade's worth of macroeconomic data from the 1950s, when Keynesian macroeconomics was being adapted (and misrepresented) into textbook format. Neither before nor after have there been business cycles of such smoothness, making the conventional-wisdom approach to budget balancing a fantasy.

Even if such smooth business cycles existed, we still would not be able to balance the budget from growth to recession and back. Government spending is not measured against cyclical revenue - especially here in Wyoming it is measured against the maximum of revenue that the economy is capable of producing. Many legislators vote to ramp up spending to the very brink of what taxpayers can pay for, and then some.

Or, to quote Sir Humphrey Appleby, my favorite government bureaucrat: "they pitch for as much as they think they can get away with".

Here is a more realistic illustration of the interaction between spending and revenue: 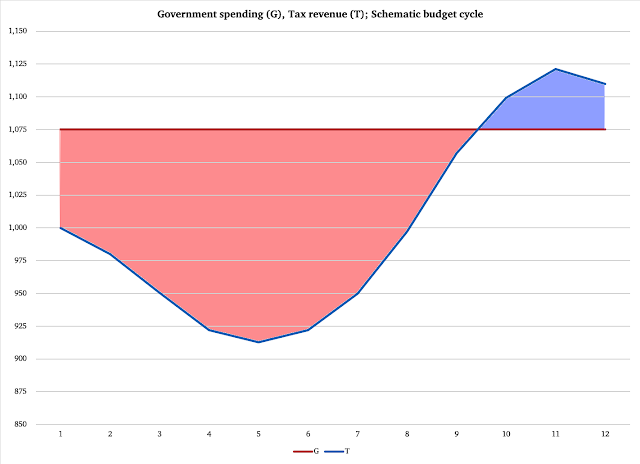 This is the image of a structural deficit towering over a cyclical deficit; when government permanently spends more than its taxpayers are able to afford, it runs a structural deficit. That deficit cannot be closed with higher taxes - any increase in the tax burden will exacerbate the structural imbalance in the budget.

Even if a state government does not have a structural deficit, it still cannot protect spending over time by relying on perfectly balanced surpluses and deficits. The business cycle needed to produce such a perfect balance simply does not exist.

Despite the fact that there are no perfect cycles, there is still this idea floating around - shared by Governor Gordon - that government both should and could bring in tax revenue to compensate for the losses in a recession.

There are two reasons why this is impossible. The first is explained below; the second will be discussed in a coming article.

The first reason why you cannot shield government spending from recessions has to do with the difference between the determinants of spending and revenue in the state budget. I discussed these factors in a recent article; for now, let us just note that government spending does not fall when economic activity decline, but tax revenue does.

We get a deficit. Let us use a schematic over the state budget to see what this means. Total economic activity (Y; values on the right vertical axis) is represented by the grey columns. Government spending (G; red) and tax revenue (T; blue) are quantified on the left vertical axis. At constant tax rates, tax revenue remains steady at ten percent of total economic activity.

Suppose a recession breaks out and we follow it month by month: 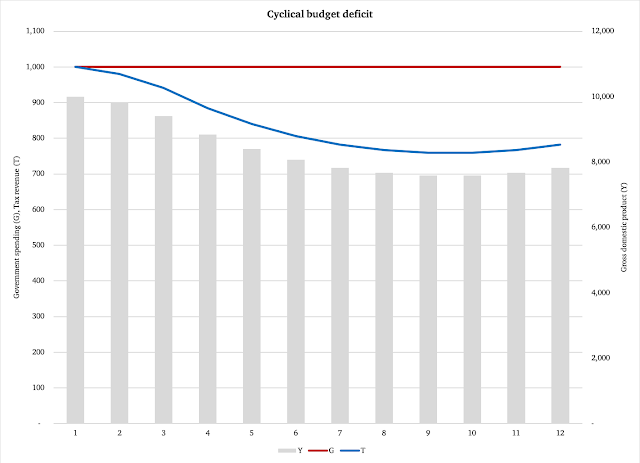 The legislature now has to come up with some crafty way of covering its deficit. Our lawmakers here in Wyoming have run out of craftiness, which is good. The bad news is that they want something like this - a tax that produces more revenue when the economy is doing worse: 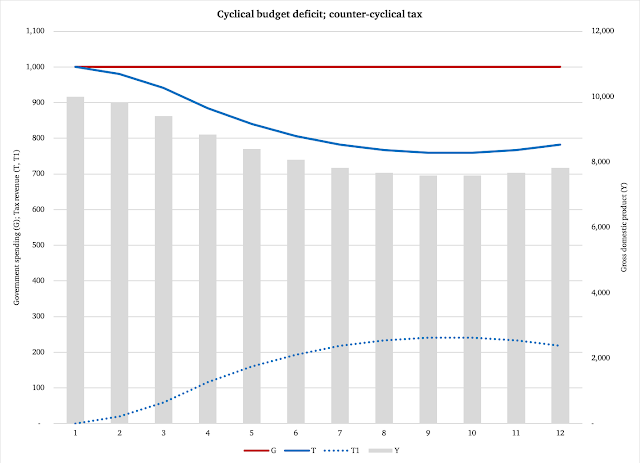 There is only one way that this can happen, and that is if the legislature decides to raise taxes on people in the midst of a recession.* In other words, here is what would had to happen to the tax rate in our schematic example: 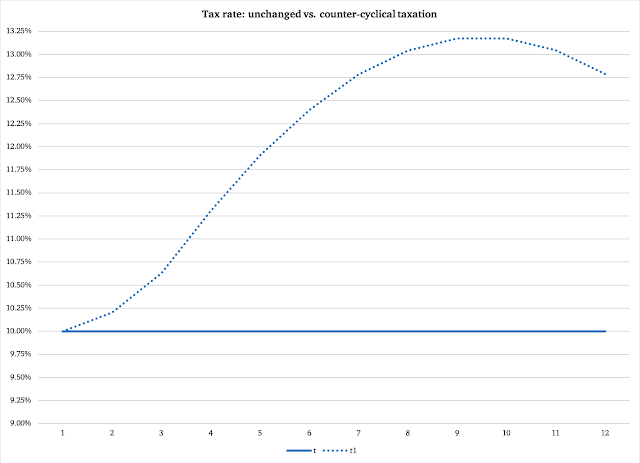 We should note that this example is entirely static: there is no consideration of what happens to the economy when taxes go up. Obviously, if we raise taxes on businesses that are already struggling to even stay open, and families trying to cope with loss of income, we are not exactly going to help them.

The next article will take a look at the Wyoming economy and how the search for "government shield revenue" is like chasing a ghost.
---
*) Those who want this kind of "neutralizing" revenue source believes that there is an exception to this rule. We will discuss it in a coming article, and see that this exception - again - is just a legislative dream with no bearing in reality.
at December 11, 2019