Government Reform Starts With A No To Tax Hikes

Is it possible to balance the state budget by means of efficiency gains? No. Here's why.


The Appropriations Committee is getting ready to sink its teeth into Governor Gordon's budget. Starting Monday they will disseminate a budget designed to let business-as-usual spending roll on. There is not a shred of an attempt to change the unsustainable course of our state government; on the contrary, in fact, as the governor made clear when he first presented the budget.

It is impossible to solve our government's budget problems without structural spending reforms. Let us hope the legislature does a better job than the governor on this point. However, it won't do with just a few efficiency reforms - those are good and important, but they are only going to give us a "down payment" on spending reform. They buy us time to break the trajectory of spending and permanently solve the state's structural spending problem. However, efficiency reforms do not solve the long-term budget problem.

To see why, let us work through some basic fiscal mechanics of the state budget. Our problem in Wyoming is not much different from the problem in the federal budget: a structurally overspending government. There are primarily two variables that cause this overspending, both of which can only be addressed with structural spending reform:

1. Employee compensation.
a) Salaries are usually marked up to keep apace with inflation. When this cannot happen due to budgeting limits, government agencies tend to find other ways to give employees a raise. A common method is to give people a promotion, even though their work duties really do not change. Over time, both regular salary hikes and artificial promotions vouch for a gradual, long-term rise in the cost of government - even if we keep the number of employees constant.
b) Employee benefits packages are marked up to avoid a deterioration in the benefits provided. In the case of health insurance, the services that this insurance pays for will go up in price over time, as health care becomes more sophisticated and high-quality over time. (As a general statistical rule, the cost of health care tends to increase at about twice the rate of inflation.)

2. Entitlement benefits.
a) As with benefits for government employees, costs are driven by the nature of the product provided under the entitlement (think Medicaid).
b) Costs in cash assistance programs are COLA-related, formally or informally.
c) Eligibility for federally sponsored entitlements is tied to the poverty level, which in turn is upgraded annually according to a COLA-proxy formula. Since the early 1980s the federal poverty limit has been at approximately 55 percent of median household income. When income rises, so does the poverty limit and, consequently, the number of people eligible for Medicaid, SNAP, WIC, TANF and related programs.

Similar spending-growth mechanisms are built into Medicare and Social Security. In other words, in a welfare state government spending expands automatically over time - and that growth rate is not tied to growth in the tax base.

Speaking of which: the tax base expands based on entirely different variables. The precise growth trajectory for tax revenue depends on the composition of the tax base, but it is a coincidence if tax revenue grows on par with spending. Historically, though, tax revenue grows more slowly than spending, for macroeconomic reasons that a later article will elaborate on. Trend-wise, and schematically, the difference between spending growth and growth in tax revenue looks like this: 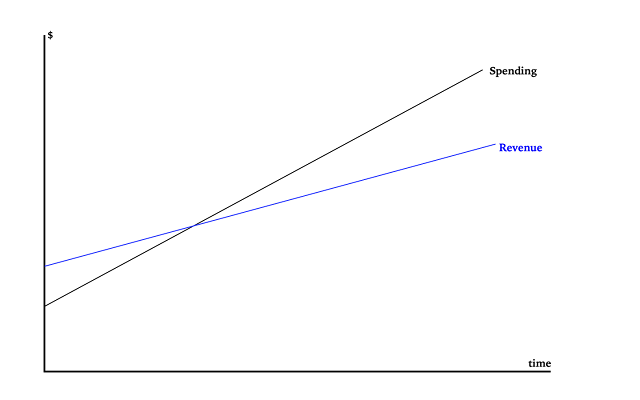 Figure 2 explains why tax hikes don't work. An attempt to raise taxes to close the budget gap (a) temporarily bumps up revenue, but also flattens the growth trajectory. The reason is the negative effects of tax hikes on private-sector economic activity, and thereby on the tax base. With the growth trajectory flattened, the budget gap starts growing again as soon as the dynamic repercussions of the tax hikes kick in. A repetition of the tax-hike strategy (b) has a similar effect, exacerbating - rather than mitigating - the budget gap: 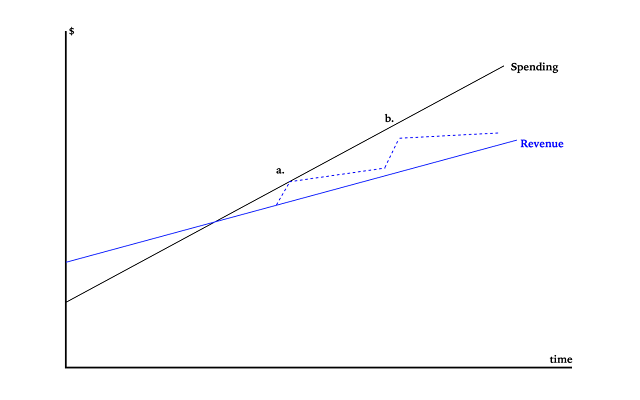 It is worth noting that reforms to bring in more revenue without raising taxes have essentially the same effects over time as attempts to raise taxes. Such reforms usually rely on simply expanding the existing tax base, which - again - does not change the long-term trajectory of revenue growth. The tax revenue still depends on the very same economic activity as before. The idea to make more efficient use of state-controlled lands is a case in point here; while the trajectory would likely not flatten, it also does not become steeper.

The budget deficit continues to grow over time.

Another often-discussed strategy is to eke out efficiency gains in government operations. As explained in Figure 3, an efficiency reform, whether it is about doing a bit more with a bit less in agencies or making better use of land and other capital, temporarily lowers the cost of government in a way that mirrors a tax hike.

The problem with efficiency reform is that it does not change the trajectory of spending. That, as we remember, is determined primarily by government payroll costs and the costs of entitlement programs.  Therefore, as Figure 3 reports, an efficiency reform (1) means only a temporary reduction in the budget deficit: 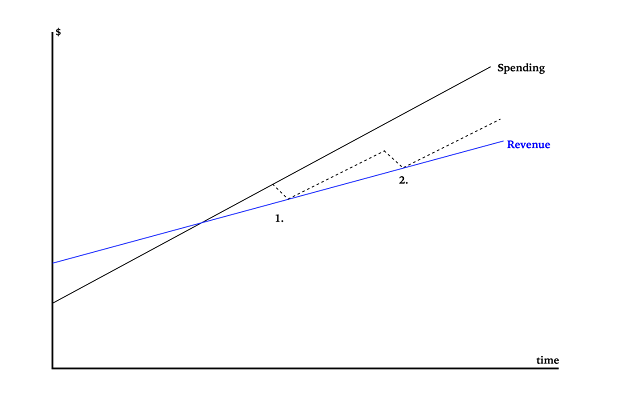 It is not a good idea to try to repeat efficiency reforms over time (2). Initially, there are excesses in government operations that an efficiency reform can weed out, but over time those gains are maxed out. At some point, the very provision of government services is affected negatively; when a school has fired all its assistant principals, at some point it will have to start firing teachers in order to produce efficiency gains.

Government does not innovate to gain efficiencies. Only the free market can do that. The only cost reductions that are sustainable are those that come from privatization of government activities (which, for the record, includes privatizing funding). Such spending reforms would permanently reduce the size of government and thereby change its cost trajectory (3): 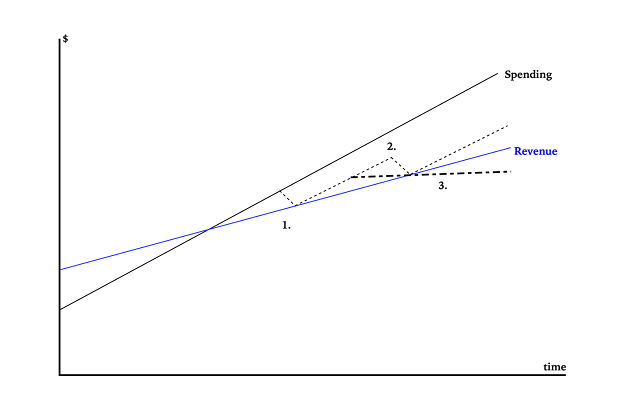 There are no cheapskate ways to close a budget deficit. It does not matter how much we try to avoid the economic realities of public finance and macroeconomics - three truths still apply:

1. Government spending grows independently of government revenue;
2. Attempts to raise revenue, through tax hikes or otherwise, will always fail; and
2. The only way to eliminate budget deficits is to structurally and permanently reduce government spending.

Every attempt to reform government spending must begin with a universal, unwavering no to higher taxes.
at December 07, 2019