What will America be like after a debt crisis? The answer begins with a look at Greece, ten years after they were thrown into the turmoil of debt defaults, skyrocketing interest rates and the loss of 25 percent of their GDP.


Ten years ago the political leadership of the European Union plunged the continent into an abyss of austerity. Media made Greece the poster child of the crisis, in part for good reasons: thanks to crippling tax hikes and destructive spending cuts, the Hellenic republic lost one quarter of its economy.

One quarter. This is equivalent to the United States losing $5 trillion worth of economic activity. Imagine 40 million Americans losing their jobs. Or you losing 25 cents of every dollar you earn.

I have discussed the causes of the Greek disaster at length, first in my 2014 book Industrial Poverty, then in my two-part series for the Center for Freedom and Prosperity. Briefly, the cause of the Greek crisis was decades of overspending that built up a debt so large it finally killed investor confidence. At that point, the crisis threatened the very European currency union, whereupon the EU, the European Central Bank and the IMF formed an austerity troika to force Greece to balance its budget.

And force they did: taxes increased from 39 percent of GDP to 50 percent. Government spending fell precipitously, leaving hospitals operating on skeleton funding, schools in shambles, pensions and unemployment benefits scraped to the bottom, and some welfare benefits reduced up to 90 percent.

The welfare state defaulted en masse on its promises. Government cut its spending - not a bad thing if done in good order, but this was not "good order". Those who depended on the welfare state were left out to dry, with no way to compensate for the lost benefits through work or entrepreneurship. Taxes, namely, went up so much it killed private-sector activity. Interest rates skyrocketed, peaking at 25 percent, and unemployment topped out at 30 percent.

Business investments fell by two thirds during the 2009-2014 austerity period. This is unheard of this side of the Great Depression. It was like someone had set off a macroeconomic atom bomb in the Greek economy.

The EU-ECB-IMF leadership knew very well what was going on, yet they kept pressing the Greek government for more budget cuts. They forced Athens to default on a large part of their government debt, destroying the country's ability to leave the euro and build credit on its own. All that mattered to them was to save as much as they could of the welfare state, at any cost to the private sector.

However remote the Greek crisis may seem to be to Americans, it carries with it a significant lesson for policy makers everywhere. Our country is not exempt from the ramifications of a debt crisis. On the contrary, our political leadership, federal as well as in the states, is - in general - dangerously ignorant of the disaster awaiting us when the debt crisis breaks out.

Today, five years after the five-year-long austerity crisis peaked in Greece, the country is still struggling with balancing its budget. The focus of fiscal policy remains on protecting the welfare state by balancing the budget with no regard for the performance of the private sector. Consequently, the Greek economy has undergone a tectonic transformation, one that the nation will never recover from unless it decides to rid itself of its welfare state.

Figure 1 reports real, annual GDP growth in Greece, from 1996 through Q3 of 2019. The industrial-poverty threshold of two percent is added for reference: 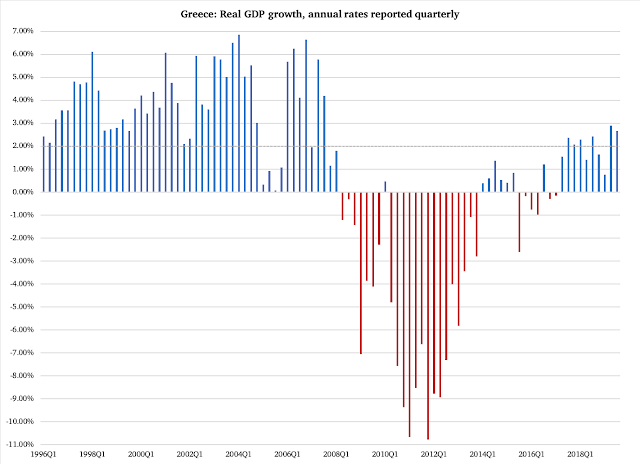 Not only did the Greek economy shrink for five years, but since its return to growth it has barely broken the IP threshold. This means that whatever growth the Greek economy has mustered, has been used to just maintain the standard of living that Greek families have left. (In a modern industrialized economy it takes 2+ percent real annual growth to create enough room for people's economic standard to actually rise over time.) This point is conspicuously verified in Figure 2, where we compare growth rates in the three components of private-sector spending: consumption, business investments and exports.

The comparison is made a bit differently than what is common in economic reporting and analysis. To isolate the structural transformation of the economy over time, the comparison looks at how 100 euros worth of, respectively, consumption, exports and investments have grown over time. Using actual growth rates for each variable, Figure 2 provides a stunning picture of the Greek economy - and, especially, the effects of the efforts to save the welfare state during the peak of austerity: 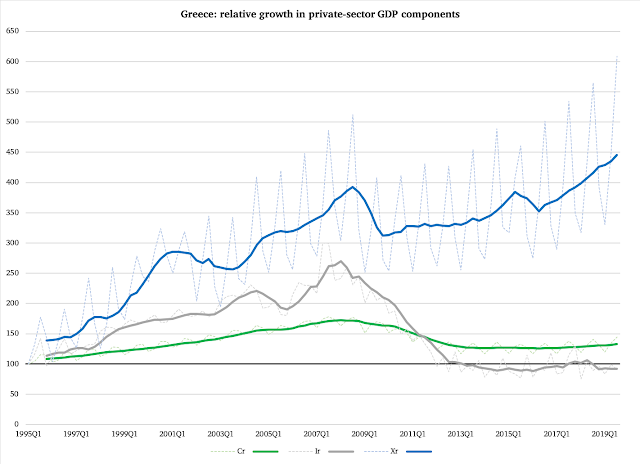 An even bigger disaster has happened in business investments (the grey function). In 2008, at the peak right before the debt crisis, Greek businesses spent approximately 2.5 times more on production equipment, structures, offices, and on building homes, than they did in 1996.

In 2019 they spend nine percent less than they did in 1996. Businesses in Greece are currently investing at an inflation-adjusted rate of 91 euros for every 100 euros they invested 23 years ago.

Since 2008, Greece has lost 62 percent of its business investments.

The country has basically turned back the clock to a pre-industrial era.

But what about exports? That is the only bright spot in the Greek economy: with a brief disruption around the Great Recession 2008-2010, exports have grown steadily for more than two decades.

It is often said among European economists that exports is the key to prosperity. It is not. Without launching into a long lecture on the theory and practice of political economy, let us just compare the growth in exports in the Greek economy with the trajectories of private consumption and investments. If exports yielded the benefits for the economy that mercantilist-minded economist claim it does, there would be a parallel rise in business investments.

Bluntly: if exports multiplied, creating gobs of jobs elsewhere in the economy, prosperity would be on the rise. Businesses all over the economy would be expanding their capacity to keep up with demand.

Private consumption would be blooming. It isn't, and neither are business investments. Therefore, and sad to say: there is no way that Greece will be saved by exports. Only a rollback of the country's welfare state can bring about growth and prosperity again. So long as the welfare state remains in place, the country will be struggling with some of the most burdensome taxes in Europe.

Only a libertarian reform, built on the principles of faith and freedom, can solve the Greek, macroeconomic equivalent of the Gordian knot.
at December 06, 2019