Corporate welfare is a bad practice that distorts the allocation of resources in the economy, from investment capital to labor. It also skews the tax burden to a point where it is blatantly visible in tax-revenue data.

Corporate welfare is a bad practice. It is not as bad as individual welfare, especially not in terms of how much money government doles out, but there are other bad consequences. When government doles out money to some businesses but not others, it distorts competition - picks winners and losers - and makes some industries look a lot more attractive to investors and workers than they otherwise would be.

There is no literature available that has convincingly established just how much money our economy misallocates thanks to subsidies and other forms of corporate welfare. However, we can get a good image of these distortionary effects by looking at how subsidies alter the tax burden across industries. The Bureau of Economic Analysis produces an excellent database called KLEMS, basically centered around the value-added method for calculating GDP. As part of that database they report the net tax burden on production and imports, by industry, where "net" means that subsidies have been subtracted from taxes.

The best way to measure the tax burden is to divide net taxation by the industry's own value added. That way we get a purely economic definition of the tax burden; taxes as a ratio to corporate income adds the problem with deductions eligible under the current tax code. By contrast, value added is not only the actual value of the production in the industry, but also a concept immune to the legal aspects of the corporate income tax.

Dividing the net tax burden by value added gives us an interesting picture of what industries really pay taxes today. Highest on the list is retail: America's supermarkets, car dealerships and home improvement outlets shoulder the highest net tax burden of them all. Wholesale businesses are not far behind, followed by utilities and AER, the full name of which is "arts, entertainment, recreation, accommodation and food services": 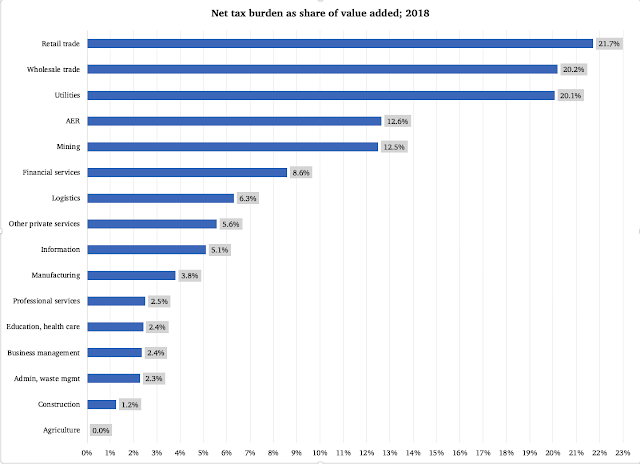 It is perhaps not very surprising that we find agriculture at the bottom. While many farmers are struggling, there are also large businesses in agriculture that have consistently and successfully lobbied Congress for subsidies.

Minerals are taxed at a comparatively high net rate. This may come as a surprise, given the public debate over how oil companies supposedly get away with paying no taxes. It is important to keep in mind, though, that "Big Oil" consists of two different industries: extraction - also known as mining - and production of refined petroleum products. To highlight this distinction, let us break down the super-categories in Figure 1 in two steps. First, Table 1 reports the "regular" industry categories that are commonly referred to in the public debate:

Again, retailers end up right at the top, shouldering the heaviest net tax burdens. Farms, by contrast, now end up being negative taxpayers, but it is also worth noting the industry highlighted in green. This is the often-revered "technology" industry, where we find businesses like Google and Facebook. Its low net-tax burden of 2.2 percent of value added is an indicator of how this industry has been able to attract such generous amounts of venture capital over the years.

As for the second part of "Big Oil", here is a breakdown of the manufacturing industry for non-durable goods:

Here, the subsidies show up. However, when we add together the two legs of " Big Oil" we get a net tax burden above nine percent. (This includes the production of coal products, so the estimate is not perfect.)

The numbers reported here only reflect part of corporate welfare; they do not include "economic development" which is usually doled out in two forms:

An inclusion of this part of corporate welfare will change the ranking of industries reported here. However, that is a project for another day.
at December 23, 2019