How does the state of Wyoming spend your money? And how much do they spend? Hint: a lot more than you think...


In his first budget, Governor Gordon stayed far away from any brave actions on spending. He mainstreamed his spending policy and even opened the door for higher taxes. This moves the goal post on spending reform in the absolute wrong direction: it is now going to be even tougher to fight for structural cuts to the state government.

Which, needless to say, means that it is even more important than ever that we stand firm against higher taxes. The path to a smaller government starts with absolute, unwavering opposition to tax hikes.

Part of the path to solid resistance to higher taxes runs through the state budget - and not just the General Fund, which is what media usually talks about. The General Fund, as it happens, constitutes just over a third of state government spending; last year more than 44 cents of every dollar our state government spent, fell under the Other Funds category. For reasons that I am yet to find out - and I have been doing this for almost 15 years now - media and politicians carefully ignore the Other Funds category when they talk about government spending.

We, however, will not ignore that part, nor will we ignore the Federal Funds that pour in to our state's coffers by the hundreds of millions every year. The Census Bureau database that gave us state revenue data for 2017 (the latest year with comprehensive data), also has informative data on state spending. While it does not separate General, Federal and Other Funds, the database merges the three into aggregates by function.

The first distinction is the one between  direct spending and money the state sends to local governments. Out of a total of $8.2 billion in spending for 2017, the state shipped just short of $3.1 billion down to school districts, counties, cities and towns. The remaining $5.1 billion was allocated as follows: 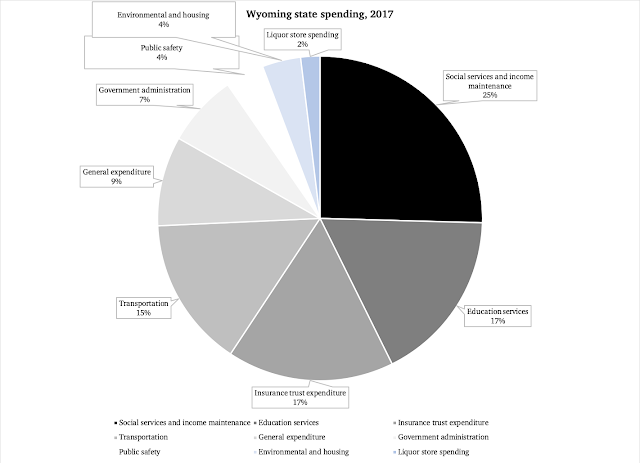 Here is the same breakdown in dollar amounts:

The largest category, Social Services and Income Maintenance, breaks down as follows:

The Health category is almost entirely Medicaid. Notably, the Medicaid figure itself is larger than $416.6 million: in the National Association of State Budget Officers state spending overview, Wyoming reports spending $615 million on Medicaid in 2017. This does not mean there is a discrepancy between the Census data and the NASBO report; by Census definitions, part of Medicaid spending falls under other categories.

There is no further breakdown of public welfare reported, simply because the Census Bureau does not have the resources to itemize it in more detail. However, it is worth noting that when Wyoming reports its state spending to NASBO, the state does not give any details on public assistance.

In Governor Gordon's new budget, almost 42 percent of the appropriations for family services - included in but not the totality of public welfare - go toward "grants and aid payment", colloquially "welfare". Another 34 percent are spent on personal services performed by social services with about 17 percent added for contractual services. While, again, these numbers do not reflect the same item as in the Census data, they give us an idea of what the "public welfare" category consists of.

The last item varies significantly over time, reaching almost absurd proportions in some states during the Great Recession. It is worth noting, though, that 2017 was not exactly a good year for the Wyoming economy: we had just lost 17,000 private-sector jobs over a two-year period. The fact that unemployment compensation spending did not go further than it did, suggests that the downturn in our state's economy in 2015-2016 led to a sizable outbound migration. Interstate migration data seem to corroborate this.

As a side point before we continue: the combination of job losses and outbound migration is a harbinger for what will happen to the Wyoming economy if the legislature raises taxes.

Back to state spending, another item that does not break down to sub-items is "General expenditure". Adding "administration, we get fairly close to "administration and information" in the state budget, but this is, again, more of a statistical point than anything else.

One of the most debated state-spending issues is capital construction. In 2017, the state spent a total of $633.7 million on capital projects; it deserves to be pointed out that K-12 schools are not included here. They fall under the local-government category; the capital spending reported under the state is entirely related to the university and to our community colleges. However, more than 77 percent of the state's capital spending folds in under transportation:

Again, the state's direct spending consists of $5.1 billion, with an additional three billion dollars being sent on downward to local governments. This interstate fiscal dependency is problematic for a number of reasons, one being accountability and transparency. For example, who do you hold accountable for school spending when a good portion of the money is appropriated by the state government, but the schools are local-government agencies?

For the next article, on local government revenue, click here.
at November 20, 2019