Where do local governments in Wyoming get most of their revenue? Not from taxes.


In this the third installment in my series on government finances in Wyoming, we are looking at local-government revenue. (Click here for Part 1 about state government revenue and here for Part 2 about state government spending.) As before, the numbers reported here are from the Census Bureau database over state and local government finances; there are newer numbers out there, such as the ones on spending over at the National Association of State Budget Officers website. However, the Census Bureau produces the most comprehensive, most methodologically solid database, that also allows for comparisons with other states and over time.

Before we get started, it is worth noting that all local governments are bundled together. A more detailed analysis, using other statistical products, would allow us to break out school districts. However, that will have to wait; for now, the point is to give a picture of the size and breakdown of local government revenue and, thereby, some basic information from which to ask our elected representatives in counties, cities, towns and school districts some pertinent questions about their budgets - and what they do with the money.

Speaking of which: the fourth and last installment will be about local government spending.

More on that later. For now, let us take a look at local-government revenue here in Wyoming.

All in all, in 2017 our local government

in revenue. This means a total deficit, across all counties, cities, school districts and other entities, of just over $123 million, or 2.4 percent of total spending.

The money comes from five revenue sources: taxes, fees and charges, utilities, federal funds and state funds. Can you guess which one is biggest?

Exactly. State funds. Here are the sources of the $4.96 billion: 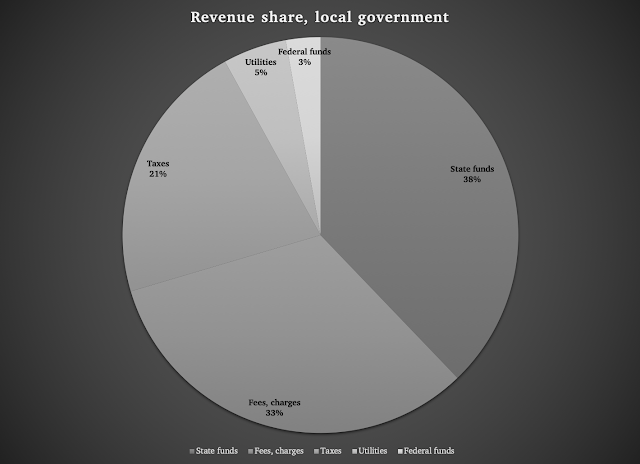 If we add state and federal funds together, our local governments received over $2 billion from other governments. This equals more than 40 percent of total revenue.

While this share is not the same for all local governments - it is higher for school districts - it is important to note the two problems that come with such a high dependency on other government entities.

The first is the ripple effect: the way the state budget goes, so go the finances of local governments. A local school district in a relatively stable local economy will suffer the same budget cuts as other districts do, when fiscal panic brings our legislators to take the chainsaw to the state budget. A solution, of course, is to localize funding and reduce the responsibilities of the state. This could easily be done as part of comprehensive school-choice reform.

The second problem is accountability. Who do you hold responsible for school district policy when its board members are locally elected but its money comes from the state? When your school district lays off teachers and builds a new shrine for your 16-per-class high school, is that the work of your local school board or of generously spending state legislators? Who do you run against to bring about a better policy?

We do not discuss these problems very often. A much more contested topic is taxes, which - as Figure 1 reports - are only half as important to local governments as state and federal funds are. With just over two dimes of every dollar coming from taxes, local governments are even less dependent, on average, on taxes than the state government where the tax share is almost one quarter of every revenue dollar.

Again, this varies depending on whether we are talking about counties, cities, school districts or special purpose districts. However, the low average share of tax revenue is a reminder to never discuss government complaints about inadequate revenue based solely on how much they take in from taxes.

Next up is the "fees and charges" category, which again provides local governments with on third of their revenue:

Here we have another problem. The heavy reliance on hospitals may not come across as much of a debatable issue, but Wyoming is slowly moving in the direction of more government-run hospitals, with private for-profit and non-profit entities being phased out. This means, bluntly, that government funnels revenue from health insurance providers into local government coffers, by means of hospitals.

Things get even more problematic when we take into account the trend toward ever larger tax-funded health insurance. Medicaid Expansion would drastically increase the number of Wyomingites on Medicaid - if all of the people eligible under Expansion were to join, another 47,000 people would become dependent on taxpayers for their health care. And, as a reminder, this would likely reduce the number of privately insured individuals, and private-insurance revenue for hospitals, by a proportionate amount.

This is, after all, what happened in Montana.

At the end of the list in Table 2 is a big item called "Other". This is to 95 percent utility-based revenue, primarily from supply of water and electric power.

For the next article, on local government spending, click here.
at November 27, 2019