The Welfare State and the Budget Deficit

It is rare that you can capture the destructive force of socialism in one graph. But you actually can. Check it out.


In my 2014 book Industrial Poverty I explained how the European welfare state has brought the continent's entire economy to a virtual standstill. I also pointed to the terrible consequences for Sweden from a disastrous attempt back in the 1990s to save the Swedish welfare state from destroying the country's economy.

Four years later, in The Rise of Big Government, I showed how the American welfare state shares the same ideological architecture as the Swedish welfare state. For this reason, I predicted, we are eventually going to share the European experience with fiscal panic, destructive austerity and macroeconomic stagnation.

In short, a life in industrial poverty.

The welfare state is the root cause of macroeconomic stagnation. As shown in the compelling numbers reported below, there is a close tie between the welfare state and the budget deficit. That tie eventually puts government in a position where it has to make a choice between

The former option is what Greece and other European countries tried to do. A decade ago they reached the end of that rope: as investors fled Greek treasuries and forced interest rates north of 20 percent, the Greek government faced a chasm of debt default, an economy in rapid decline and government finances in uncontrollable tailspin. In a feeble attempt to avoid the deep-end solution the Greek parliament began passing a series of austerity measures aimed at reining in deficits.

Which brings us to the latter option. Once a country gets to the fiscal-panic point - the point where investors begin fleeing your debt - all roads lead to industrial poverty. Austerity as practiced in Europe is always aimed at saving the welfare state: its combination of higher taxes and spending cuts reduces the current budget deficit by taking more money from the private sector while giving less back. As a result, government avoids having to structurally reform away any spending programs (though in Greece they were eventually forced to reduce some entitlements by up to 90 percent).

As a consequence of austerity, the private sector loses more of its resources to government, while getting less back. Health care - where provided by government - becomes less reliable and less accessible, leaving many businesses having to deal with employees being away longer on sick leave. Income security programs, including unemployment benefits, are eroded, forcing people to draw down savings faster than otherwise. Those who still have jobs have to put more money aside for contingency purposes, reducing current spending. School quality deteriorates as a result of growing class sizes, fewer educational options and less-educated teachers (to allow for cuts in staff costs).

In short, austerity forces taxpayers to pay more (taxes) for an inferior product (government programs). On top of the drainage from higher taxes on household spending, payrolls and business investments, austerity also forces the private sector to create private alternatives where possible. This is good per se, but the problem is that the private sector now pays for both a deteriorated welfare state and for working, reliable private alternatives. This further depresses private-sector economic activity.

When you have to pay twice for a pair of shoes, you can't buy a new hat.

The U.S. economy is currently doing well, but the welfare state is relentlessly pushing us toward that chasm of fiscal panic. As Figure 1 reports, there is a very close tie between the budget deficit and the welfare state. The green function represents the amount of dollars, in annualized values, that households and families across America receive every year; the red function represents their payments in taxes out of their personal incomes: 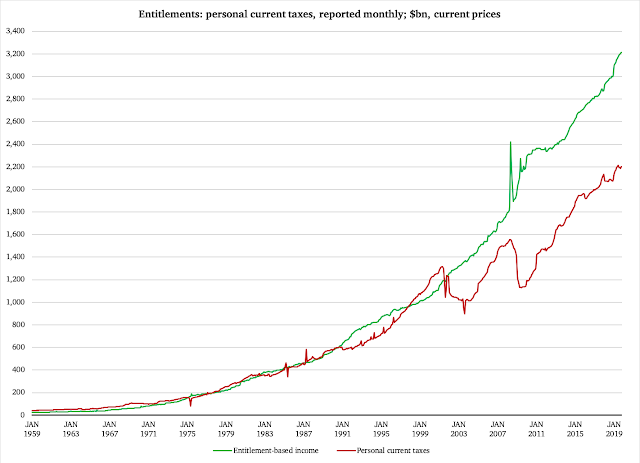 For the past 16 years, at least, households and families have been getting more from government than they have paid through direct taxes on their income.* The problem started earlier than that, though, and is directly traceable to the War on Poverty - also known as the "Great Society" project - started by President Lyndon Johnson. Figure 2 reports the same numbers as in Figure 1, but as a ratio of dollars paid in taxes out of personal income: 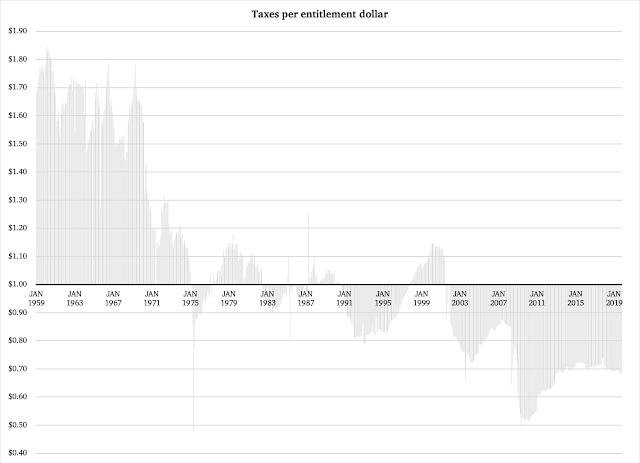 This ratio declines rapidly once the War on Poverty begins. It consistently goes negative with the Millennium Recession - not because of the recession per se, but because of the permanent decline in GDP growth that followed. That depressed tax revenue and made more people eligible for more entitlements. This has put the welfare state under increased pressure.

This permanent decline in growth... 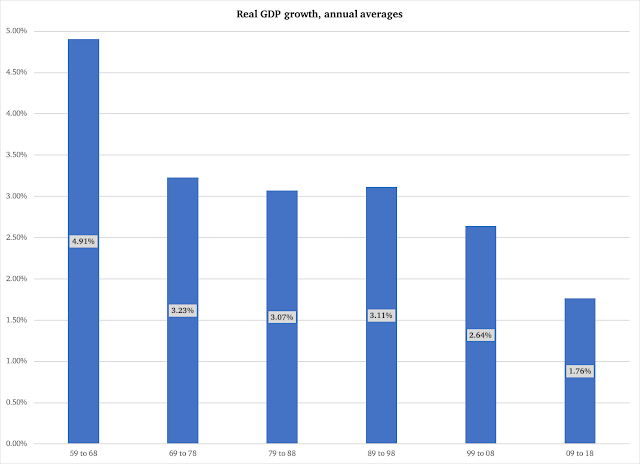 ...is not a coincidence. It is the result of the gradual growth of the welfare state. Progressive taxes that punish career development, entrepreneurship and risk-taking discourage growth-generating investments in capital and labor. Entitlement programs for low-income earners discourage people from accepting full-time positions and promotions, even pursuing an education. When a person is at the upper limit for the Earned Income Tax Credit, the loss of the EITC and other entitlements constitutes a de-facto marginal tax rate similar to an income ten times his own.**

It remains to be seen what the long-term growth effects will be of President Trump's deregulation and tax-cut policies. So far they have been good for the American economy, and the outlook for the coming year is cautiously optimistic. We are also seeing strong signs of supply-side effects in tax revenue. Consider, e.g., Figure 4 which reports current-price growth rates in the sources of personal income. It also reports changes to the taxes paid out of personal income: 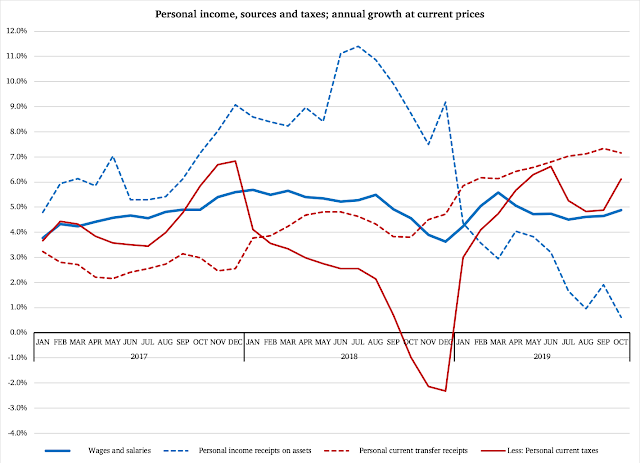 The acceleration of taxes paid - the solid red line - would be good news for the federal budget, were it not for the fact that there was an even stronger acceleration in entitlements paid out (dashed red line). What this tell us, frankly, is that the imbalance described in Figure 2 is growing; the welfare state is once again destroying the opportunity to a balanced budget that came out of a sound, growth-oriented tax reform.

Unless Congress gets its act together (generally) and gets started on fiscally sustainable spending reforms, we will continue to move straight down the path to a fiscal crisis. The welfare state, and only the welfare state, is the cause of the federal government's budget problems.

---
*) This review is admittedly partial. It does not include all taxes paid, nor does it account for all government spending. It shows, however, the structural nature of the welfare state: the payouts of ideologically motivated entitlements and taxes under an equally ideological designed tax code. Since the two are both ideological in nature, they are not created to generate a fiscal balance.
**) As far as federal taxes go, this was somewhat alleviated in the Trump tax reform that benefited low-income families. To this, one has to add the effect of the change to the SALT deduction, which to some degree counters the effects of the cuts in federal personal income taxes.
at November 30, 2019