You know the government debt situation is bad when the Federal Reserve chairman issues an end-of-the-rope warning.


As I recently reported, the U.S. economy is taking a breather from its long growth period. I predicted that there will be no real recession, more of a pause before we return to growth again.

I also noted that there is one certain way to escalate an economic breather into a recession: fiscal panic.

There are two ways to address a budget deficit: with long-term, structural spending reforms that gradually and permanently reduce the budget deficit; and short-term austerity measures aimed squarely at reducing the deficit as much as possible, with no regard to the long-term consequences of such measures. The former alternative is the only recommendable way to close the budget gap; the latter alternative, which always relies primarily on tax hikes, is a path to industrial poverty, economic stagnation and an unending fight against deficits.

So far, we have no immediate reasons to believe that Congress will employ either policy strategy to do away with its deficit. However, the longer Congress waits with engaging in structural reforms, the more precipitously it will paint itself into the austerity corner. In his November 13 testimony to the Congressional Joint Economic Committee, Federal Reserve Chairman Jerome Powell hinted of a similar scenario. He voiced clear concerns about the federal budget deficit. He reminded the committee of the role that fiscal policy plays in a recession. Then he noted, referring to the recent long-term budget outlook by the Congressional Budget Office:

the federal budget is on an unsustainable path, with high and rising debt: Over time, this outlook could restrain fiscal policymakers' willingness or ability to support economic activity during a downturn. In addition, I remain concerned that high and rising federal debt can, in the longer term, restrain private investment and, thereby, reduce productivity and overall economic growth. Putting the federal budget on a sustainable path would aid the long-term vigor of the U.S. economy and help ensure that policymakers have the space to use fiscal policy to assist in stabilizing the economy if it weakens.

Indeed. As I recently noted, the U.S. economy is going to take a breather over the winter, but as of today there is no real reason to expect a recession. That could change quickly, though, especially if there is a sharp turn for the worse on the fiscal front.

The problem for Congress, and for the President, is that they are already borrowing irresponsible amounts - in a strong economy. Office of Management and Budget numbers predict that for 2019, the federal government will borrow 24 cents of every dollar it spends; the Congressional Budget Office predicts the deficit to be 20.4 percent of total spending.

Going forward, the outlook for the federal budget is highly uncertain, a point highlighted by the strikingly different budget forecasts from the CBO and the OMB: 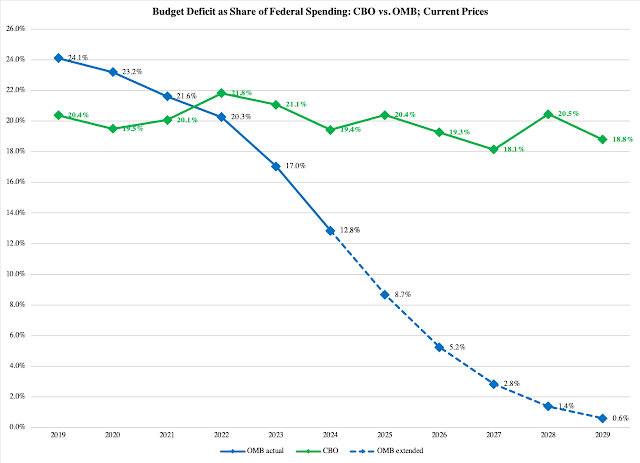 Sources of raw data: Congressional Budget Office and Office of Management and Budget

To be clear, the dashed segment of the OMB outlook is not theirs - it is mine. Backward-engineering the OMB's parameters for its forecast 2019-2024 I extended it to cover the same period as the CBO forecast. Given that this is a reasonable extrapolation of the OMB's analysis, one has to ask how the two agencies can disagree as much as they do.

The reason is, plain and simple, that there are so many uncertainties surrounding the federal budget that the outcome could be almost anywhere. In fact, there is a scenario missing that is just as likely as these two: one where the deficit explodes and Congress rapidly borrows more and more of every dollar they spend.

A disaster scenario like this would result from a rapid shift in fiscal policy, from today's business-as-usual approach - manifested in the CBO outlook - to panic-driven tax hikes and uncoordinated, short-term driven spending cuts. By contrast, the OMB forecast could turn out to be true if two things happen:

1. Trump is re-elected, and
2. Fiscal conservatives get to set the agenda in Congress.

If so, we could see another round of tax cuts. A TrumpCut 2.0 would be necessary to reignite the U.S. economy; we have essentially run out of the steam from TrumpCut 1.0, which was necessary and welcome but not strong enough to carry the economy farther than this.

Do we have reasons to expect this scenario? Based primarily on experience, the answer would be negative. Figure 2 reports average annual spending growth by presidential term: 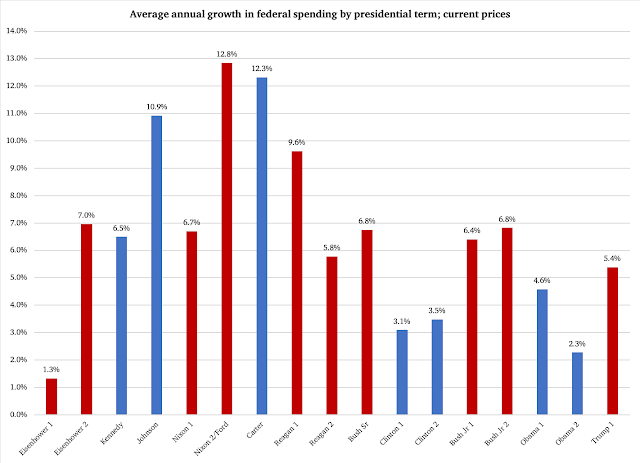 Source of raw data: Office of Management and Budget

For obvious reasons we don't have the final numbers yet for Trump's first term, but it is unlikely to change much. However, it would be rash to assume that Trump is just another big-spending Republican. He has a desire to rein in spending and reduce the size of government, but like any president he needs a Congressional majority that is favorable to such policies. Until we get there, we have to assume that the three budget scenarios discussed earlier are all equally probable.

This means, bluntly, that the future of the American economy is also highly uncertain. Today's budgetary status quo, where spending rolls on and the deficit remains high, could easily be upset if Congress runs out of credit. A scenario that was unthinkable only a decade ago has suddenly become a real possibility.

And herein we find the real message from Jerome Powell. Money-printing for the purposes of buying Treasury bonds, also known as deficit monetization, only goes so far. The steam gained from such Quantitative Easing will evaporate even quicker if the Federal Reserve decides to take interest rates below zero.

Powell's testimony before the Joint Economic Committee reinforces the risk that this could happen, and happen soon. He basically says that fiscal policy - the jurisdiction over which lies with Congress - has been driven into the ditch by completely irresponsible borrowing. There is no way Congress could use its budget or its deficits to stave off a recession.

At that point, only monetary policy has some ammunition left. Once interest rates go sub zero, that ammo has been spent, as well.

When that happens, we are going to see panic-driven tax hikes and uncoordinated, short-sighted spending cuts of a kind America has never experienced. To see what this means, we have to go to Europe, primarily their mishandling of the aftermath of the Great Recession. 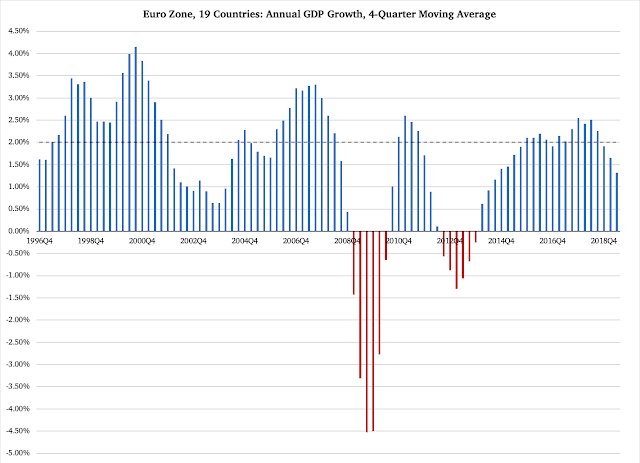 With this in mind, consider the effects on treasury bond yields in the euro zone, of the European Central Bank's efforts to monetize deficits: 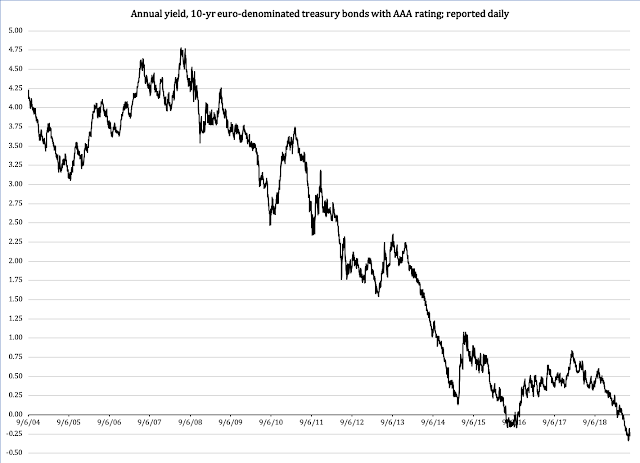 There is a clear message for Congress in these last two figures: you cannot rely on monetary policy to save you. When interest rates fall below zero - with the federal funds rate dictating the path for Treasury bond yields - it will not help the economy grow. When the economy gets stuck in slow-to-stagnant growth rates, the same applies to tax revenue. With continued growth in spending, this means one thing, and one thing only: perennial, growing deficits.

My greatest fear with these numbers is that Congress is going to continue to ignore the approaching fiscal cliff, and when they get there they will resort to destructive fiscal-panic measures. This means drastic tax hikes combined with equally drastic spending cuts. In fact, there is no more sure-footed path to higher taxes than fiscal panic; in Europe, the usual combo of panic-driven fiscal policy is two dollars worth of tax hikes for every dollar in spending cuts.

Anything close to that would cripple the U.S. economy.
at November 19, 2019