It often looks as though majorities in Congress don't matter in terms of government spending. Well, that's not true. All-out Democrat control of government will increase spending by more than twice as much as Republicans do in the same situation.


Like so many others, over the years I have been very critical of the lack of fiscal conservatism in the Republican ranks.

The criticism has not been unwarranted; for example, during the Bush Jr. administration the federal government increased its non-military spending by more than six percent per year. There is also a wealth of literature to back this up, with Michael Tanner's classic Leviathan on the Right as one of the best.

That said, the Republican penchant for spending belongs in a context, namely the competition between them and the Democrats. As much as we default to cynicism asking "what competition?", the fact of the matter is that Democrats are even worse than Republicans at spending truck loads of our money.

I have the numbers to show it. I compared congressional majorities, presidential party affiliation and annual growth in federal spending, and found - somewhat surprisingly - that the key to spending restraint is a Republican majority in Congress. I had, frankly, not expected the result fo be as strong as it was.

My review starts with the 81st Congress, elected in 1948. This year is chosen for two reasons, the first being that the economy had transitioned from its war mode during World War II back to a civilian economy. Among many other things, this allowed the federal budget to take on a more "regular" shape.

Secondly, 1948 marked the first election for Harry Truman, who had become president when Franklin D Roosevelt died shortly after the 1944 election. Elected on his own merit, Truman could be expected to run fiscal policy based more on his own policies and preferences than on a legacy inherited from the man whose term he was filling out.

The 35 Congresses reviewed - including the incumbent 116th - are matched against 13 presidents, from Truman to Trump. For all of those Congresses we have two years' worth of annual spending data, except for the incumbent one for which we only have a forecast for one year. Nevertheless, the source for spending, the Office of Management and Budget, has a proven track record of making fairly accurate predictions of spending. Therefore, for the purposes of this review we can treat the 2019 figure as similar to actual spending numbers.

First, a review of the full database. The first column denotes the Congressional number, the second the year they went into office. Then we have the Senate majority, the House majority and the name and party affiliation of the president. The last column reports annual, average spending growth for that Congress: 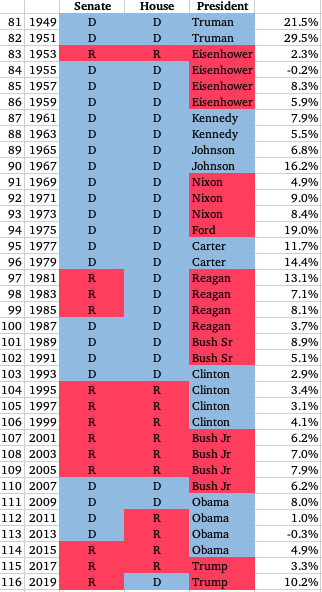 Before we look more closely at how party majorities and affiliations go together with spending growth, a note is in place on the spending numbers. The Truman years cover the build-up and duration of the Korean War, which for obvious reasons meant a rise in military spending. Likewise, the Vietnam War build-up affected the spending numbers for the 90th Congress. However, those years also marked the beginning of President Johnson's War on Poverty, with a large increase in entitlement spending.

Speaking of which: from 1964 and on the federal budget underwent a tectonic shift, away from military spending onto welfare-state spending. Before the War on Poverty, half the federal budget went to the military; today, the defense budget is hovering around 15 percent. The primary reason for this, again, is that we have built a big welfare state that now consumes more than two thirds of all federal spending.

It is important to keep these structural changes in mind, not because they water down the findings reported here, but because they are the result of deliberate policy decisions. It is, for example, easy to pin the almost revolutionary shift in federal spending, from core government functions onto entitlements, during the 1960s on the the fact that Democrats held both chambers in Congress and the presidency for four consecutive Congresses (or, as Representative Ocasio Cortez would put it, "all three branches of government"...).

Let us now organize the data from Table 1 to see how party affiliations have played out through the years, in terms of spending growth. Table 2 defines six different majority constellations:

Here is how these play out, with red marking Republican and blue marking Democrat. The upper panel organizes them by constellation, from D+ to R+, and the lower panel by spending growth: 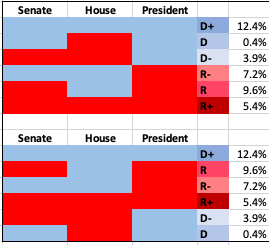 The lower panel tells us two things. we have had D+ majority in ten Congresses, which makes the 12.4-percent average annual spending growth a fairly solid number. There is no doubt, simply, that when Democrats have full control over both the legislative and executive branches, they go all out in terms of government spending.

Secondly, it is a necessary condition that Republicans hold the House. The three constellations with the lowest spending growth have one thing in common: the GOP controls the origin of the federal budget.

In this context, it matters less that the two most fiscally conservative constellations have a Democrat president; while President Clinton deserves credit for spending restraint, it should also be noted that he had to work with a conservative-leaning Congress. Likewise, Obama simply refused to work on budgets with the Republicans in the House, leading to a situation where federal spending was driven by continuing resolutions. That is almost by definition a recipe for spending restraint.

By the same token, it is not entirely fair to criticize Republican presidents for having signed lavish budgets. We have had 15 Congresses with a Republican president and a Democrat majority in the House. Since Democrats are far more likely to increase spending than Republicans when they control the House, a GOP president finds himself in a situation where he has to accept entitlement growth in order to get his budget priorities - including tax reforms - through Congress.

Again, the numbers I report here do provide some vindication for Republicans. Perhaps most important of all is the comparison between the D+ and R+ constellations, where the latter is associated with a more-than-twice as high growth in spending as the latter. To be fair, we have only seen five Congresses with an R+ constellation and ten with D+, but when we take into mind the fact that the GOP is far more restrictive when it controls the House, we can safely conclude that Republicans are notably more fiscally conservative than Democrats.
at November 21, 2019