There are efforts under way in Wyoming to create a corporate income tax. One of the arguments is that it will stabilize government revenue. It won't. Quite the contrary, in fact.


One of the more prolific arguments made in favor of a corporate income tax in Wyoming is that it will diversify and stabilize state revenue. In June 2018 WyoFile ran a story that lauded the Revenue Committee's efforts to "diversify" the state's tax base. On September 17, 2018, the Casper Star Tribune quoted then-Senate Revenue Committee chairman Ray Peterson:

As we make attempts to diversify our revenue streams in Wyoming, this is a direction that the Legislature might consider in the future

In August this year the Revenue Committee passed the seven-percent corporate income tax, and on September 19 the Casper Star Tribune reported:

Though it's not likely to raise much money - just $23.1 million per year at a tax rate of 7 percent, according to an updated Sept. 12 memo from the Wyoming Department of Revenue - the bill accomplishes something Wyoming has been trying to accomplish for years: diversify the state's revenue streams in a way that imposes little punishment on residents.

The idea, of course, is that a more "diverse" tax base will be more resilient and somehow protect the state budget from the ups and downs of the business cycle. Nobody has been able to explain why government should be shielded from the reality in which taxpayers life, but that question aside, a corporate income tax will not stabilize tax revenue.

I mentioned this briefly in yesterday's article where I noted that in 2015-2017, when the minerals industry experienced an economic downturn, states with big coal and oil extraction and a corporate income tax had to put up with significant drops in revenue. Today we will expand on this point.

A review of data from the states with a corporate income tax, for the years 2015-2017, suggests that:

a) When the economy is doing well and GDP is growing strongly, there is little to be gained in terms of tax revenue from corporations; and
b) When GDP is stagnant or in decline, there are significant drops in corporate income-tax revenue.

In other words, creating a corporate income tax is a waste of legislative effort. It will alienate businesses and redirect their investments elsewhere. 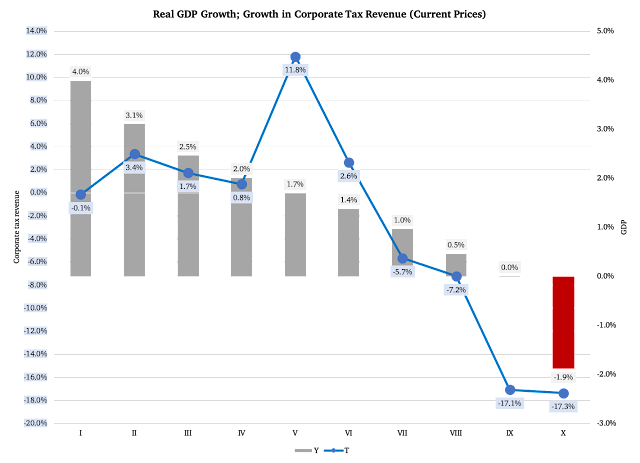 At the other end, though, when GDP is in decline, corporate-tax revenue goes into a fast-and-furious decline. As soon as GDP growth falls below one percent (in other words, it is still growing) revenue from the corporate income tax shrinks.

This is very important for a state like Wyoming, where GDP in the past ten years actually declined; in 2018 the private sector was ten percent smaller, in real terms, than it was in 2008. Of the past ten years, the Wyoming GDP (courtesy of the BEA) has exceeded one percent growth in one year only:


Given the compelling correlation in Figure 1, this tells us that if Wyoming had created a corporate income tax in 2008, the state would have lost revenue from it every single year except 2015. In fact, using the numbers from Figure 1, suppose the state had collected $23.1 million in 2008, as the proponents of the corporate income tax suggests we will do if we create it now.

By 2018 the state would have been collecting $6.74 million from the corporate income tax, a loss of about 71 percent of the revenue over ten years.

And this is not counting the negative impact on growth from the corporate income tax itself. Nor does it take into account the extra tax money that the state would have to shovel into economic development in order to overcome the resistance among businesses to invest in Wyoming as a result of the tax.

It is high time for the Wyoming state legislature to reconsider its emphasis on raising taxes and diversifying its revenue base. Wyoming cannot afford higher taxes; as we will see in a coming article, the state already has one of the costliest governments in the country. Demanding more from businesses and families will only exacerbate the economic struggle that the Cowboy State finds itself in today.
---
*) One observation from a state with a corporate tax is removed from the data set, namely from South Dakota in 2016. The reason is that the spike in revenue for that year was in excess of 600 percent, almost nine times as high as the next observation. Normally such observations do belong in the data set, but as an extreme outlier it would have skewed the trends derived from the remaining 137 observations. Again, this is not recommendable - though an all-too-common practice among econometricians - but it makes sense for the limited purpose of this article.
at November 01, 2019