More evidence that the Revenue Committee here in Wyoming already is destroying jobs with its corporate income tax. Months before the tax has even come up for a vote in the legislature. As the old adage goes: just talking about higher taxes is bad for the economy.


A month ago I warned that since the Joint Revenue Committee began discussing a corporate income tax in July, private-sector employers have responded with caution and restraint. I specifically predicted that the decision by the committee in August to support the corporate income tax, would have negative effects on jobs growth.

Never bark at the Big Dog. The Big Dog is always right.

Behold the October numbers from the Bureau of Labor Statistics on private-sector job growth in the 50 states and the District of Columbia. Can you find Wyoming? 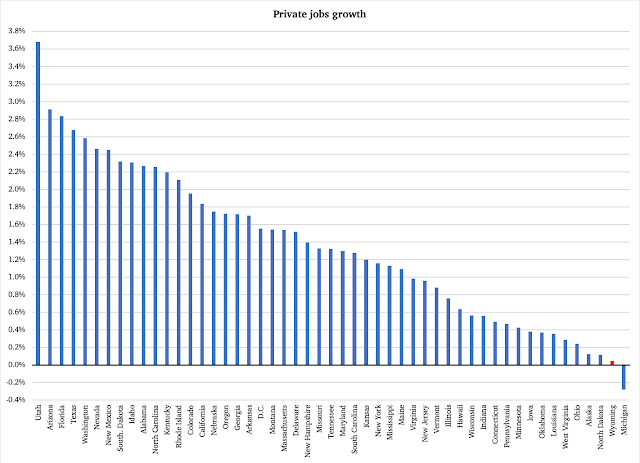 It comes as no surprise that Utah, the perennial prosperity machine, remains on top. They may have a corporate income tax of 4.95 percent, but their total cost of government is only two thirds of what it is in Wyoming. Furthermore, it is worth noting that of the ten states in top, five are no-income-tax states. We could have benefited from that status, but instead we are second to last, being beaten even by such a tough economy as Alaska.

And just to anticipate the usual "oh, well, coal" argument, please note that Kentucky is 12th; even West Virginia is doing notably better than us. I might also add that the minerals industry employs only ten percent of the private-sector workforce in Wyoming. Nine out of ten privately employed Wyomingites work in other industries.

The October jobs number is not an isolated event. As Figure 2 reports, jobs growth ground to a halt earlier this year when the discussion of the corporate income tax - together with sales taxes on services and a serious increase in property taxes - began making headlines: 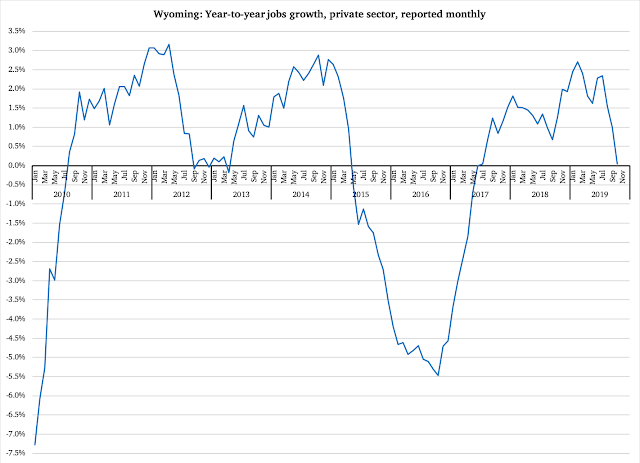 A similar abrupt end to a jobs-growth streak has happened on two previous occasions in the past ten years. The first one was a "breather" in late 2012, which is attributable to the volatile initial recovery from the Great Recession. Next, we saw this happen in 2015, marking the beginning of a two-year period of big job losses: from 2015 to 2017 Wyoming lost more than 17,000 private-sector jobs.

That is the episode to compare with. To date, we have recovered about half of those 17,000 jobs. Now it looks like the private sector is no longer going to add jobs, but may instead start cutting jobs. I am not going to predict as much; we will probably see a stagnant trend over the winter, but even that would be noteworthy. Anything below two percent in November and December, respectively, will be disappointing.

As yet more evidence of how the prospect of a corporate income tax is causing businesses to hesitate, consider the comparison in Figure 3 of trend in jobs, weekly hours and hourly wages. There is an alignment in the three trends that we have only seen once in the past ten years - again in 2015: 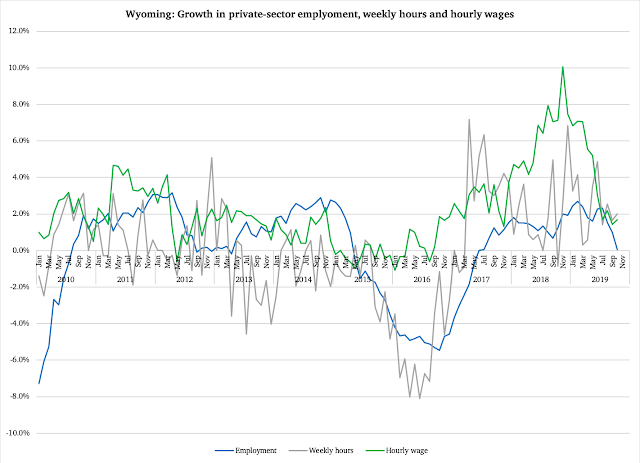 Recently, growth in hours and wages have lined up around two percent. Before we discuss the compelling message in this, let us magnify the past 12 months: 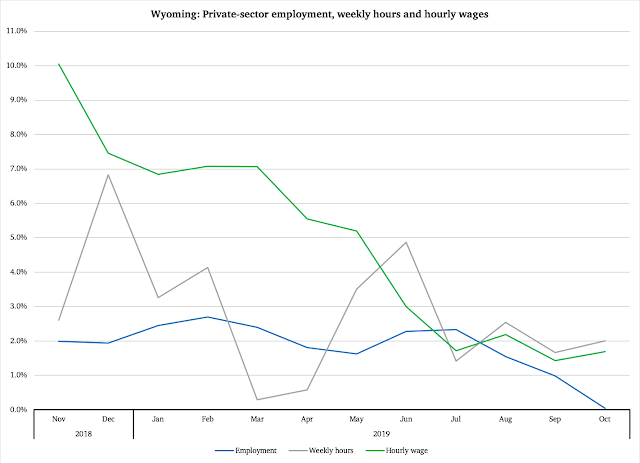 Back again to Figure 3, we see an amplitude over time in the growth and decline in weekly hours worked. This amplitude effectively goes away during 2019. This is well in line with economic theory: this kind of shift is attributable to to increased uncertainty among employers. When the future looks more uncertain, it is always better to put all cost variables on a narrow path where they are closely predictable, than to let them fluctuate.

The halt in job growth reinforces this point. On the wages side, it is worth noting that in 2015 they held steady - did not decline more than marginally - while employment and hours fell conspicuously. If we are indeed heading for another decline in employment, we should see a reduction in jobs and hours while wages should remain largely flat.

Again, I predict that this is not going to be a decline of 2015 proportions, but more of a "breather" while employers await the legislature's decision on taxes, specifically the corporate income tax. However, if we - God forbid - get to the point where the legislature passes the corporate income tax, we will very likely see this economic breather escalate into another episode of job losses. At that point, expect jobs, hours and even wages to decline.

How likely is it that the corporate income tax will pass? The legislature faces a real challenge, having to rally a 2/3 majority behind it. That is the good news; the bad news is that in my almost eleven years here in Wyoming I have never seen the legislative leadership this determined to shove higher taxes down the throats of Wyoming taxpayers. I suspect that they will do everything and anything they can to get what they want.

Governor Gordon has rendered himself irrelevant. On the one hand, he is powerless against a veto-proof 2/3 majority, but on the other hand he has declared that he is willing to line up behind a corporate income tax if it is tied to mental-health spending.

It is going to come down to a select group of hard-line tax opponents in the legislature, and equally dedicated voters and taxpayers, to save the Wyoming economy from the corporate income tax. The alternative is obvious, structural spending reforms, and the path to those reforms begins with uncompromising opposition to higher taxes.
at November 22, 2019