The problem with government budget deficits is not limited to the federal government. Did you know that in 2016, 42 states ran a deficit?


My recent article Government Is Not Cheap about the real cost of state and local governments, and the two-part about full-size government, got quite a few hits (contributing to making September the third-best month of all time for this blog - thank you!). These are hugely important issues, directly related to the future prosperity - and even liberty - of our country.

Bluntly: our governments, federal, state and local, spend too much because

a) back in the 1960s we built an egalitarian welfare state; our unending problems with budget deficits did not exist before then; and
b) we stubbornly refuse to reform away this welfare state.

These numbers are all-inclusive, adding together all revenue from taxes, fees and other charges, and all spending. The latter includes other-funds outlays normally ignored in debates over government finances; the normal order of business is to only discuss the General Fund. When we take this full-picture approach to states and local governments, we find not only - as mentioned - that 40 states show a deficit, but that in 16 states that deficit is more than five percent of total spending.

And this is in governments that cannot print their own money and therefore are fiscally limited to current revenue, the drawdown of savings or borrowing entirely against future tax revenue: 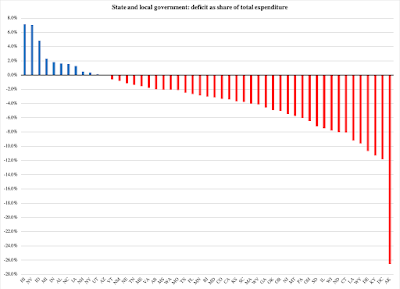 Common sense demands an answer to the question how this is possible when, as explained by the National Council of State Legislators, 44 states require their governors to submit balanced budgets, 41 states mandate that their legislatures pass a balanced budget and 38 states prohibit the carryover of deficits. There are two answers to this, the first of which is that legislatures and governors find crafty ways around such limitations, one of which is to backfill budgets with windfall revenue.

The second answer is that these limitations only apply to the state budget. Local governments may have their own requirements, but since about one third of local-government spending is funded by the states it is not meaningful to talk about strict budget-balancing mechanisms in local-government budgets.

In a sense, the difference between state and local government finances is an accounting matter. This is especially true in a state like Wyoming where the state legislature has a great deal of control over the ability of local governments to raise taxes. Nevertheless, it is worth noting of the combined deficit for all the 50 states (the deficits in 40 states minus the surpluses in the other ten) one 18 percent was due to local-government overspending.

The bulk of the problem is, in other words, a state matter. In 2016, a total of 42 state governments ran deficits, with 19 states having a deficit both at the state level and in local governments:

These are deficit numbers reported for just one year. They are not unique, though: with states carrying a heavy burden for the American welfare state (Medicaid being just one example) this is an ongoing problem. Its only solution is a series of structural reforms to roll back the welfare state, one entitlement program at a time.
at October 02, 2019