The Deficit Epidemic: An Update on Europe

The United States has a big problem with big deficits, but we are actually in better shape than Europe. They don't even have the GDP growth that we do.


As we saw in my article The Deficit Epidemic, federal, state and local governments in America are chronically dependent on deficits to fund their spending. This is, of course, an untenable situation in the long run, one that only can be resolved by structural spending reforms. The deficits are, namely, caused by an entirely unsustainable welfare state.

There is plenty of evidence to this point, much of which I have provided myself (see list of literature at the end of this article), but there is also plenty of immediately available evidence. Here is, for example, a quick look at Europe, the continent where the egalitarian welfare state was born, bred and nurtured to acutely unsustainable proportions.

For understandable reasons, aggregate data for the European Union does not stretch very far back in time. Before the Maastricht (later Lisbon) Treaty was signed in 1992, marking the birth of the European Union, there was only a number of international organizations under the common name "European Communities". Most of the production of macroeconomic statistics on the EU did not start until later in the '90s, leaving us with shorter time series. Nevertheless, the numbers that are available tell us a thing or two.

First out is the EU itself. Figure 1 reports real GDP growth (blue) and the consolidated budget deficit, i.e., the deficit for national, regional and local governments combined, as percent of government spending (red). Added is a dashed line marking the industrial-poverty threshold, a point below which an economy is de facto in a state of stagnation: 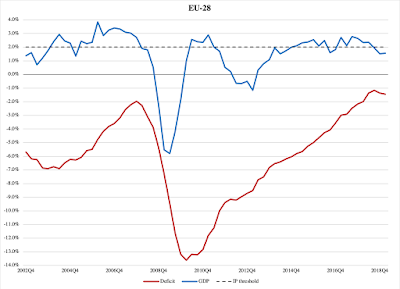 The aggregate government sector of the EU economy ran a budget deficit already prior to the Great Recession of 2008-2010. When GDP growth tapered off in 2007-2008, tax revenue growth stagnated with it. With a short lag (see the first top of the red function) the deficit rapidly expanded.

It is important to note that the decline in tax revenue is only the fiscal symptom of an increasing deficit; the policy reason for an expanding deficit is instead the unwillingness of the governments in the EU to reform their welfare states. Instead, they fought tooth and nail to preserve their big entitlement systems, embarking on an austerity campaign the sole purpose of which was to adjust the size of government not to the ability of the private sector to fund it, but to a smaller tax base.

Since the European Union forced its worst deficit offenders onto a path of welfare-state preserving austerity (the second policy regime) it also depressed the private sector in the bargain. We can see the effects of this in three individual countries. First out is Italy, where the deficit evolved in a similar fashion as we saw in Figure 1. There is a pronounced effect of austerity visible in the GDP data: after the sharp increase in the deficit in 2008-2010 the Italian government, in compliance with fiscal-policy demands from the EU and the ECB, began slashing spending and raising taxes.

Before their austerity measures went into effect the Italian economy had begun recovering (the spike in the blue function after 2009), but as soon as austerity kicked in that recovery was drastically interrupted. After a new dip into negative-growth territory the Italian government eased its austerity measures, shifting the deficit recovery into a flatter trajectory (red function after 2011) but allowed GDP to at least get back into positive growth territory: 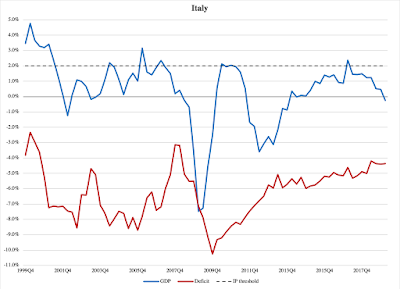 Since there was no explicit abandonment of austerity, the Italian economy has never managed to climb above the IP threshold.

Next up is Spain, where the budget collapse was far more pronounced than in Italy. The Spanish economy also experienced a protracted period of zero or negative growth. Its return to growth, even in excess of two percent, was not primarily the result of relenting austerity - although that played some role - but driven almost entirely by a rise in exports. When that small boom tapers off around 2017, as Figure 3 explains, GDP growth declines toward the two-percent mark: 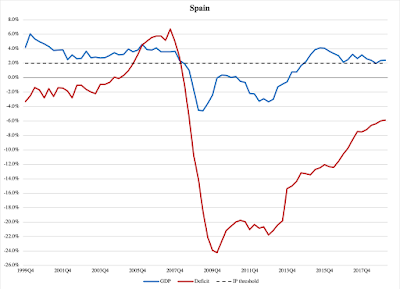 The last example is Greece, where the most notorious of the austerity crises happened. This is a country that, like Spain, has seen the bulk of its recovery come from increased exports, but it has actually managed to turn a budget deficit into a small surplus.

The price for that has been Gargantuan. Not only did the Greek government unilaterally default on one quarter of its debt back in 2012, but the economy also shrank by one quarter. A full 25 percent of the Greek economy vanished as a result of austerity policies.

For about a year, it looked like the Greeks could rejoice in the fact that their economy was growing steadily - albeit at two percent - and they had a budget surplus. Then, unfortunately, their GDP growth started tapering off again, and immediately there was a worsening of the budget balance: 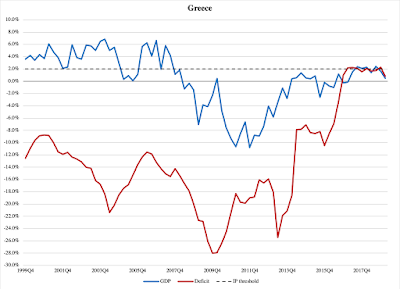 Even after ten years of forceful, uncompromising austerity, Europe is still struggling with weak government finances. The reason is, plain and simple, that they haven't learned the one lesson that matters: