State finances seem to be improving. However, if we remove one big revenue source - one that has nothing to do directly with actual economic activity in the states - the situation looks quite different. Oh, and corporate income taxes destabilize government revenue.


The Census Bureau has released its 2017 set of data over state and local government finances. It is the most detailed, most comprehensive statistical product of its kind, and even though it is a bit lagged in time, it is a treasure trove of information. Its most important function is to establish trends in government funding and how that money is spent.

In 2016, only eleven states exhibited a total state-and-local government budget balance or surplus: 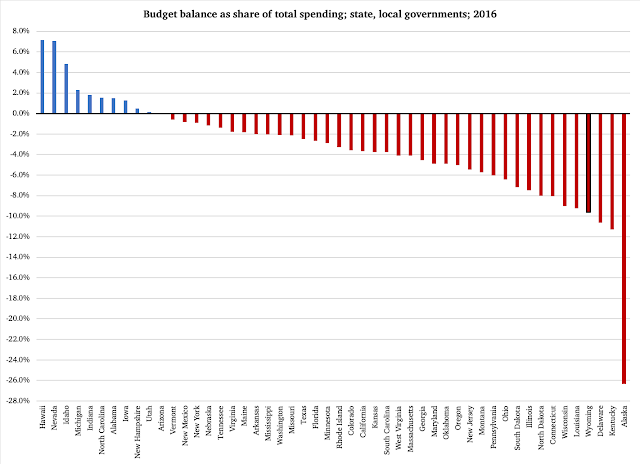 In 2017 that number had risen to 45 states, and the national average for state and local governemnts was also positive. On the face of it, this looks positive, but as we will see in a moment, that improvement is due to one and only one revenue source: 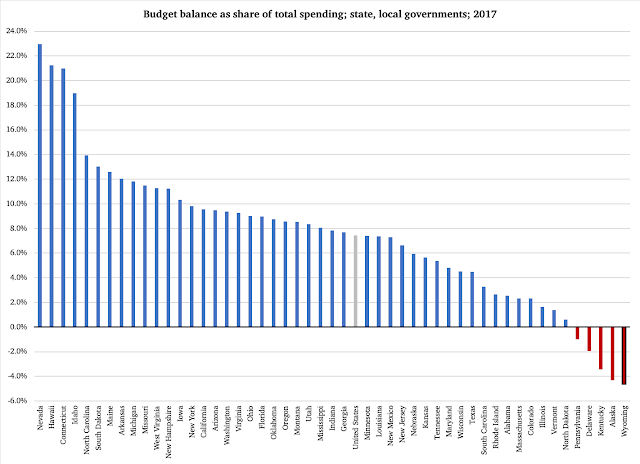 In ten states, revenue grew by more than 20 percent, with another 34 states seeing increases of 10-20 percent. In no state did revenue decline; Wyoming and Vermont were at the bottom with, respectively, 7.2 and 6.4 percent revenue growth.

However, as the federal government has so amply demonstrated, even the strongest revenue growth cannot eliminate a deficit if there is no restraint on the spending side. In 2017, only in Utah did state-and-local government spending increase by double digits (eleven percent). In 17 states did spending grow by 5-10 percent; in four states overall spending actually declined:

These are overall good numbers, but as mentioned they are only skin deep. The improvement on the revenue side is almost entirely attributable to insurance trust money: of the $534 billion in revenue increase from 2016 to 2017, insurance-trust revenue accounted for 80 percent or $426 billion. Taxes were the second most important source, adding 9.3 percent of the revenue increase. Most of the rest, 6.9 percent, came from the category "charges and miscellaneous revenue", which includes school-lunch fees; charges on colleges and universities, hospitals, airports, harbors, sewerage, etc.

From a fiscal policy viewpoint, these numbers tell us a great deal about the problems that states and local governments have in funding their operations. Setting the insurance-trust revenue improvement aside - in other words looking strictly at operational revenue - states and local governments still ran a deficit of 4.2 percent of total spending.

Looking specifically at Wyoming, the revenue picture is far from encouraging. The combined state-and-local government deficit declined from more than nine percent of total spending to 4.6 percent, but this also ranked Wyoming as having the worst government finances in the country. This is not surprising: from 2015 to 2017 the Cowboy State lost more than 17,000 private-sector jobs. By 2017 that loss flattened out and the private sector slowly returned to jobs creation. (As of today it has recovered about half of the jobs lost during that downturn.) This job loss, reflecting loss of taxable private-sector economic activity, is painfully visible in the Census data. Over the two-year period 2015-2017, the state and local governments in Wyoming

A closer look under the tax category shows:

These numbers reflect what was at the time the second worst GDP growth rate in the nation: from 2015 to 2017 Wyoming lost 3.3 percent of its GDP. Only North Dakota was worse.

Some politicians in Wyoming want to solve the state's budget imbalance by raising taxes and creating new ones. At the helm of their efforts to increase the tax burden is a seven-percent corporate income tax. A leading argument for this new tax is that the state needs to stabilize its revenue stream by diversifying the tax base. (This is also why it contains a feature that opens for a personal income tax as well.)

Not only is a corporate income tax a sure-footed way to discourage new business investments in Wyoming, but it is also a feeble way to stabilize revenue. The downturn in the Wyoming economy was in good part caused by a decline in the minerals industry; a comparison with other minerals-heavy states tells us quite a bit about what Wyoming can look forward to in the next economic recession, should it pass a corporate income tax. In 2015-2017,

At the same time, the national figure shows that even if a state would be successful in diversifying the base for its corporate income tax, that does not mean it can safely rely on a steady stream of revenue. All it means is that when the economy declines, the decline in tax revenue will be less pronounced.

In coming articles we will look more closely at the 2017 data over state and local government finances. Stay tuned.

---
*) Severance taxed administered by the federal government do not count as tax revenue.
at October 31, 2019